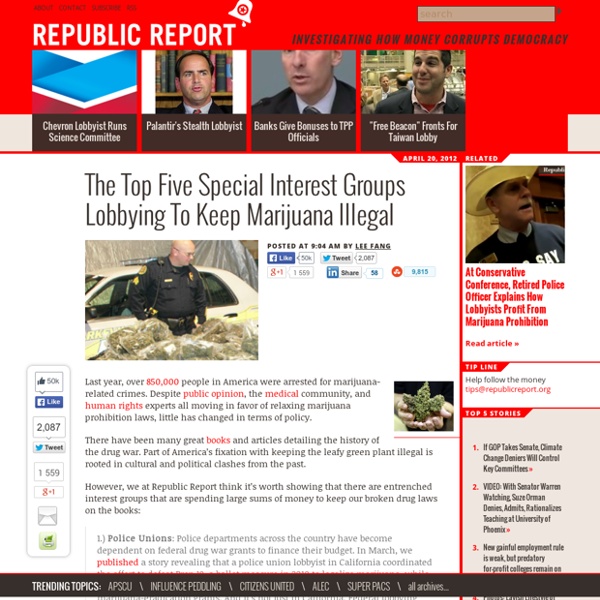 Last year, over 850,000 people in America were arrested for marijuana-related crimes. Despite public opinion, the medical community, and human rights experts all moving in favor of relaxing marijuana prohibition laws, little has changed in terms of policy. There have been many great books and articles detailing the history of the drug war. Part of America’s fixation with keeping the leafy green plant illegal is rooted in cultural and political clashes from the past. However, we at Republic Report think it’s worth showing that there are entrenched interest groups that are spending large sums of money to keep our broken drug laws on the books: 1.) RELATED: Why Can’t You Smoke Pot? To receive stories and investigations about political corruption, sign up for our daily digest here. Share and Enjoy Filed under: Lobbying

Matt Stoller: Who Wants Keep the War on Drugs Going AND Put You in Debtor’s Prison? Matt Stoller is a current fellow at the Roosevelt Institute. His Twitter feed is @matthewstoller. More than a third of all states allow debtors “who can’t or won’t pay their debts” to be jailed. Consider a different example that has nothing to do with debts. Welcome to the for-profit prison industry. Privatized prisons are marketed to international investors as “social infrastructure”, and they are part of a wave of privatization washing over the globe. Here’s the 2010 10k of the Corrections Corporation of America (PDF), the largest operator of private prisons in the country. CCA offers an assessment of risks to the company, which include ending the war on drugs or curbing the incarceration of undocumented immigrants. Many people wonder why the Obama administration is so harsh with undocumented immigrants – these words supply an explanation for why such harshness can be profitable. But there are more risks. Debtor’s prison are making a comeback because of the debt collection industry.

The Golden State’s Iron Bars “To borrow from Martin Luther King Jr.,” the head of the California prison guards union said a few years ago, “today I have a dream. I have a dream that the bricks and mortar that were planned to build new prisons will instead be used to build new schools…that an ounce of prevention will be embraced instead of a pound of cure.”... Marijuana legalization does not increase probability of use, according to researchers Jun 18, 2012 With several states, including Michigan, Missouri, Montana, Nebraska, Oregon, Washington and Colorado, considering lifting the prohibition of marijuana, and the acceptance of medical marijuana growing, counter-arguments loom over whether legaization will increase probability of use amongst high school students. Not so, says Daniel I. Rees, a professor of economics at the University of Colorado Denver. “There is anecdotal evidence that medical marijuana is finding its way into the hands of teenagers, but there’s no statistical evidence that legalization increases the probability of use.” Rees teamed with two other economics professors, Benjamin Hansen, assistant professor of economics at the University of Oregon and D. “This result is important given that the federal government has recently intensified its efforts to close medical marijuana dispensaries,” said Hansen. Wait, that’s absurd: everyone aside from the marijuana industry and its smokers are being dishonest.

Against Law, For Order It’s taken decades and millions of lives, but elite opinion is starting to move against mass incarceration. The New Yorker and the New York Review of Books ran detailed exposés on the scale and violence of the penal state. Conservative leaders like Grover Norquist have said that mass incarceration violates the principles of “fiscal responsibility, accountability, and limited government,” while GOP darlings like Mitch Daniels have tried to take the lead in state reform. Soon the common wisdom will shift from “we need to get tough on crime” to “we jail too many people for too long for the wrong reasons.” The next question is what to do about it, and here the answers are harder. What all of these approaches take for granted is that government policy runs downhill. An alternative account holds that our policy of mass incarceration reconfigures both the idea of the state and the way it carries out its duties. Neoconservative Neoliberalism A New Form of Governance

Cannabis Can Kick Cancer's Ass Actually it’s the cannabinoids (the chemicals in cannabis) that fight cancer cells. In the past nine years, there have been over 20 major studies that these cannabanoids actually arrest cancer growths of many different forms of cancer, including brain, melanoma and breast cancer. There is evidence that cannabinoids cause direct anti-tumor activity. The side effects associated with cannabis, compared with all other current drug therapies, is classified as “low risk”. You’d think that if 800 well respected Scientists concur that indeed, cannabis does have medicinal value, our Federal Government would support it’s medical use and further research, but sadly they are not. What can the governemt do to show it’s citizens that are stricken with illnesses such as cancer, MS and Chron’s Disease? Medical cannabis, has been used for centuries as a natural treatment for many conditions,until we created pot prohibition in 1937. Original Story Source More Medical Marijuana News from Around the Web:

The Illusion of Free Markets - Bernard E. Harcourt It is widely believed today that the free market is the best mechanism ever invented to efficiently allocate resources in society. Just as fundamental as faith in the free market is the belief that government has a legitimate and competent role in policing and the punishment arena. This curious incendiary combination of free market efficiency and the Big Brother state has become seemingly obvious, but it hinges on the illusion of a supposedly natural order in the economic realm. The Illusion of Free Markets argues that our faith in “free markets” has severely distorted American politics and punishment practices. Bernard Harcourt traces the birth of the idea of natural order to eighteenth-century economic thought and reveals its gradual evolution through the Chicago School of economics and ultimately into today’s myth of the free market. This modern vision rests on a simple but devastating illusion.

Let's Listen To Lobbying Reformers Buddy Roemer and, Yes, Jack Abramoff Buddy Roemer Presidential candidate Buddy Roemer and former lobbyist Jack Abramoff argue that reform of influence-peddling must be radical to save the country. Roemer, for example, refuses to take contributions over $100. GOP leaders used his lack of big-dollar fund-raising as an excuse to keep him out of all 23 Presidential debates. Too often, Roemer and Abramoff are thus ignored or disparaged despite their obvious relevant experience — and their eloquent, entertaining and otherwise effective speaking-style that matches a national mood of “Throw the Rascals Out.” The specifics of their messages deserve a wide audience, as shown by their compelling arguments during a joint appearance last week in the nation’s capital. “The nation is in trouble,” said Roemer, now a grandfather and successful banker. “I don’t think the answer is the Republican Party,” said the former two-term governor of Louisiana, who became a Republican in 1991 and returned to politics last year after a 16-year absence.

Respected Study Finds DEA Should Re-Classify Marijuana The present classification of cannabis and its organic compounds as schedule I prohibited substances under federal law is scientifically indefensible, according to a just published review in The Open Neurology Journal. Investigators with the University of California at San Diego and the University of California, Davis reviewed the results of several recent clinical trials assessing the safety and efficacy of inhaled or vaporized cannabis. They concluded: “Evidence is accumulating that cannabinoids may be useful medicine for certain indications. Control of nausea and vomiting and the promotion of weight gain in chronic inanition are already licensed uses of oral THC (dronabinol capsules). Recent research indicates that cannabis may also be effective in the treatment of painful peripheral neuropathy and muscle spasticity from conditions such as multiple sclerosis. The lead author of the review, Dr. Last month, Ms.