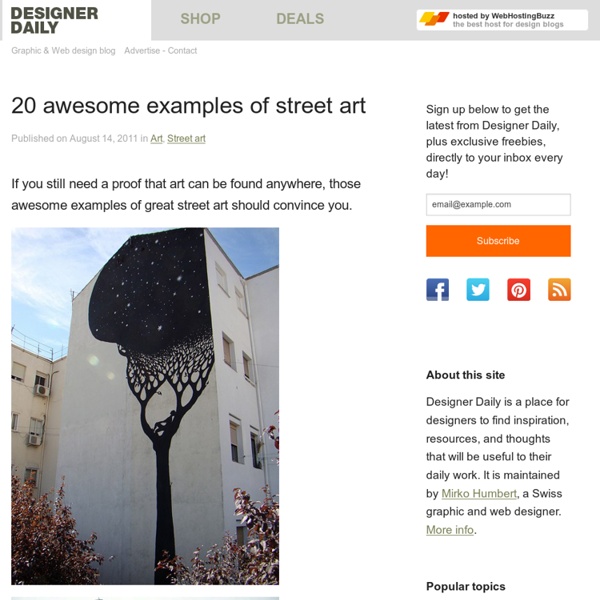 If you still need a proof that art can be found anywhere, those awesome examples of great street art should convince you.

Before I Die What matters most to you Interactive public art project that invites people to share their personal aspirations in public. After losing someone she loved and falling into depression, Chang created this experiment on an abandoned house in her neighborhood to create an anonymous place to help restore perspective and share intimately with her neighbors. The project gained global attention and thanks to passionate people around the world, over 1000 Before I Die walls have now been created in over 70 countries, including Kazakhstan, Iraq, Haiti, China, Ukraine, Portugal, Japan, Denmark, Argentina, and South Africa. The walls are an honest mess of the longing, pain, joy, insecurity, gratitude, fear, and wonder you find in every community, and they reimagine public spaces that nurture honesty, vulnerability, trust and understanding.

Show Me Your Money Face! Proving that money can buy happiness, these money/face mashups are stacking up quick around the web. The visual trick has been around for a while now, but not until this week when Reddit user MadSon11 posted his head matched with Alexander Hamiltons jaw (above) did the meme really get some legs. Redditors the world over have posted images using both U.S. bills and their own currency. Want to see MadSon11′s lower half? See the bottom of this post! BanksyInside - A Digital Magazine Dropping What's Fresh on the Web The mysterious Banksy just released some new paintings on his website. You heard it right, Banksy painted on a canvas. All Banksy fans will appreciate. Here are a few of my favourites.

Street Art In the first commission to use the building’s iconic river façade, and the first major public museum display of street art in London, Tate Modern presents the work of six internationally acclaimed artists whose work is intricately linked to the urban environment: Blu from Bologna, Italy; the artist collective Faile from New York, USA; JR from Paris, France; Nunca and Os Gemeos, both from São Paulo, Brazil and Sixeart from Barcelona, Spain. You can also take the Street Art Walking Tour: an urban tour of site-specific art from a group of five Madrid-based street artists: 3TTMan, Spok, Nano 4814, El Tono and Nuria – a map will be available in the gallery. Various events will take place during the exhibition, including an interactive evening with experimental New York artists Graffiti Research Lab, refacing Tate Modern with graffiti light projections.

Most Amazing Sand Sculptures Most Amazing Sand Sculptures Anyone who has ever been to the beach has probably tried to sculpt a simple sand structure of some sort.Well leave it to the pros, because we have some great sand sculpture pictures listed below. 36 Comments: rachael said... I've tried making sandcastles before.. 6 Terrifying Ways Crows Are Way Smarter Than You Think Mankind has a long and checkered past with crows and ravens: They have been feared as symbols of death, because they're all black and scary, revered as creators of the world because, well, it was either them or the seagulls, and worshiped as trickster gods, because of their baffling intelligence. Intelligent enough, in fact, for us to start worrying ... #6. They Can Remember Your Face Next time you see a group of crows, look closely. Try to remember which one is which, and see if you can tell the difference between them the next time you pass.