Sharing bird sounds from around the world 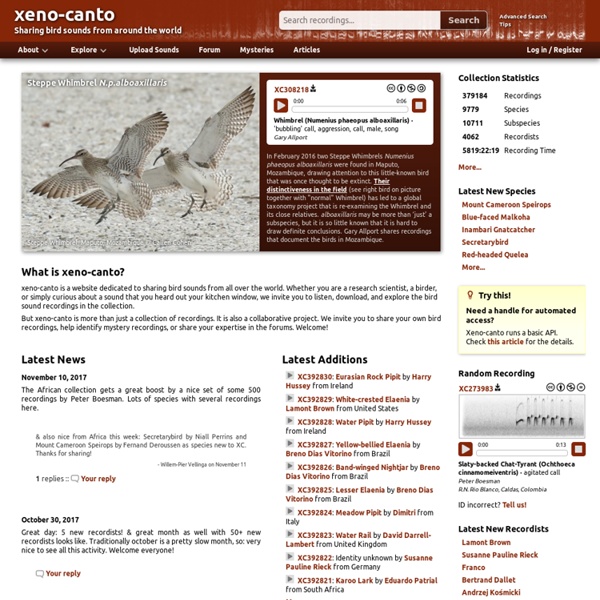 Common Buttonquail (Turnix sylvaticus) · female, song Tero Linjama Tero Linjama recently uploaded a recording of Common Buttonquail Turnix sylvaticus sylvaticus from Morocco. There are historical records from 6 countries in the Mediterranean, but at this moment the population in Morocco is the only one known. After lack of sightings in the 1990's it was considered extinct there. In recent years the birds have been found to survive in an area were fallow lands are part of the agricultural system.

SCIENCE FICTION TECHNOLOGY TERMS The following items are found in science fiction literature as technologies useful in authoring a plausible setting for a sci-fi story: PROPULSION: Faster Than Light Drive (FTL) is required for stories about star based exploits. Twentieth century rocketry is limited to activities in the Solar System. At present spacecraft velocities, the nearest star would require voyages of thousands of years. At the speed of light, the nearest stars could be reached in decades of time.

Beautiful Bird Photography Birds are beautiful creatures and with such a vast range of colourful species your sure to find a special photo opportunity. At the sight of an unusual bird your first thought would or will be to take a photo, so if this happens or you are a regular bird watcher here is some inspirational photographs for you to think about for the next time you discover a rare beauty! Please click any photograph you see below to find out more about the photographer’s photographic skill and possibly the secrets to great bird photography! If you’d like to know more about how to photograph birds please follow this link: How to photograph Birds

Legendary Parrot Who Saved His Species Dead at 80 Photo via AKO AOTEAROA Richard Henry may sound like an oddly dignified name for a bird -- but its bearer deserves nothing less. Richard was a highly-endangered Kakapo, a flightless parrot from New Zealand, who is credited by many with single-wingedly saving his species.

Edison's Files Reveal the Only Known Voice Recording of Someone Born in the 18th Century - Rebecca J. Rosen - Technology Many of the most significant moments of the 20th century are written in our brains not as naked text but as audio files. Who can think of Neil Armstrong words upon moon landing or Kennedy's exhortation to ask what we can do for our country without hearing the crackly recordings of their voices? Who can look at pictures of Nazi rallies without hearing the clipped German of Hitler? The soundtrack of history goes silent sometime in the late 19th century. We have no sound to attach to the great figures of those earlier times. But one voice thought lost has now been recovered, officials at the Thomas Edison Historical Park told the The New York Times yesterday.

All species Practise on the web – recognize out in the field Biofotoquiz offers the opportunity to train your skill to identify plant and animal species in a playful way. Biofotoquiz includes: A learning mode with three levels Four quiz modes with ranking lists The possibility „Extra 5 levels“ with increasing degree of difficulty and ranking lists Series of images and lists of species for printing A login-area to create individual series A search field to find reliable images of a species The possibility to incorporate user series in external websites At the moment there are modules of plants, grasshoppers, lepidopterans, amphibians & reptiles and birds with 29372 images of 2617 species in 324 series available. Choose a standard module, a partner module or a user module for further information.

Lushprojects.com - www.lushprojects.com - Circuit Simulator This electronic circuit simulator is highly interactive giving the feeling of playing with real components. It's very helpful for experimentation and visualization. Best of all, thanks to the power of HTML5, no plug-ins are required! The original implementation, in Java, belongs to Paul Falstad who kindly gave his permission for me to build this port. Click here to open the simulator in a full window. Taming Aggressive Birds - How to Stop Birds from Biting There is no such thing as a mean bird. It's true! There are, however, birds that are fearful, and birds with emotional problems that cause them to want to avoid handling at all costs. When birds with these problems find themselves in pet situations, it can be disastrous for both bird and owner. If your pet bird bites you when you try to handle it, it is critical that you address the issue.

Border collie takes record for biggest vocabulary - life - 22 December 2010 Video: Dog with the biggest vocabulary IN THE age-old war between cats and dogs, canines might just have struck the killer blow. A border collie called Chaser has been taught the names of 1022 items - more than any other animal. Humans Have a Lot More Than Five Senses Today I found out humans have a lot more than five senses. It turns out, there are at least nine senses and most researchers think there are more like twenty-one or so. Just for reference, the commonly held definition of a “sense” is “any system that consists of a group of sensory cell types that respond to a specific physical phenomenon and that corresponds to a particular group of regions within the brain where the signals are received and interpreted.” The commonly held human senses are as follows: Sight: This technically is two senses given the two distinct types of receptors present, one for color (cones) and one for brightness (rods).Taste: This is sometimes argued to be five senses by itself due to the differing types of taste receptors (sweet, salty, sour, bitter, and umami), but generally is just referred to as one sense. For those who don’t know, umami receptors detect the amino acid glutamate, which is a taste generally found in meat and some artificial flavoring.