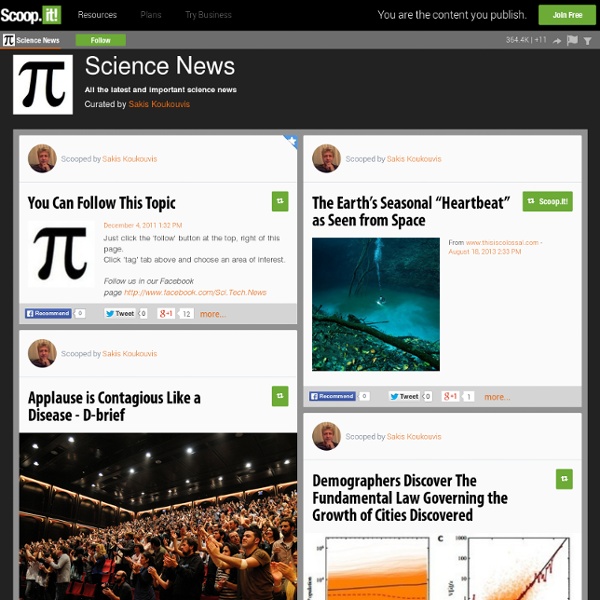 OnlyZen Definitions of Sciences and Studies Sciences and Studies This list defines 633 sciences, arts and studies of various degrees of respectability and rarity, ranging from the common and esteemed (chemistry) to the obscure and quirky (peristerophily). Over the past century, the range and scope of scientific endeavours has expanded exponentially, so that practically any field of study has a name associated with it. Most of these terms end in 'ology', from the Greek logos, meaning 'word'. I hope you have found this site to be useful. If you have any corrections, additions, or comments, please contact me.

Michio Kaku: Can We Have Brain-to-Brain Communication? | Science News Ligue des Droits de l'Homme An Interview with Douglas R. Hofstadter, following ''I am a Strange Loop'' Douglas R. Hofstadter is best-known for his book Gödel, Escher, Bach (GEB for short). In his latest book, I am a Strange Loop, he visits once again many of the themes originally presented in that book. The interview below was conducted in September 2007 and was originally published, in Hebrew, in the online culture magazine Haayal Hakore. The interview was conducted by Tal Cohen and Yarden Nir-Buchbinder. The first part of I am a Strange Loop reads like a condensed version of GEB, by explaining the idea of consciousness as a strange loop. I certainly did not believe intelligent machines were just around the corner when I wrote GEB. Am I disappointed by the amount of progress in cognitive science and AI in the past 30 years or so? I am a deep admirer of humanity at its finest and deepest and most powerful — of great people such as Helen Keller, Albert Einstein, Ella Fitzgerald, Albert Schweitzer, Frederic Chopin, Raoul Wallenberg, Fats Waller, and on and on. We'll return to Kurzweil soon.

Top 10 Mysteries of the Mind by Jeanna Bryner, Live Science Managing Editor | October 09, 2007 01:25pm ET Credit: NIH, NIDA Much of what we don't understand about being human is simply in our heads. The brain is a befuddling organ, as are the very questions of life and death, consciousness, sleep, and much more. Author Bio Jeanna Bryner Before becoming managing editor, Jeanna served as a reporter for Live Science and SPACE.com for about three years. Jeanna Bryner on

Coveting Freedom I Am a Strange Loop I Am a Strange Loop is a 2007 book by Douglas Hofstadter, examining in depth the concept of a strange loop to explain the sense of "I". The concept of a strange loop was originally developed in his 1979 book Gödel, Escher, Bach. Hofstadter had previously expressed disappointment with how Gödel, Escher, Bach, which won the Pulitzer Prize in 1980 for general nonfiction, was received. In the preface to its 20th-anniversary edition, Hofstadter laments that the book was perceived as a hodgepodge of neat things with no central theme. He states: "GEB is a very personal attempt to say how it is that animate beings can come out of inanimate matter. Hofstadter seeks to remedy this problem in I Am a Strange Loop by focusing and expounding on the central message of Gödel, Escher, Bach. As an exploration of the sense of "I", Hofstadter explores his own life, and those to whom he has been close.[4][5][6][7][8][9] See also[edit] References[edit] Jump up ^ Hofstadter, Douglas R. (1999).

Ask an Expert - BrainFacts.org | Science News CAP21 The Universe Magnified This is one of the most beautiful infographics we've ever seen: a high resolution view of different levels of the universe. Our favorite parts are the jaw-dropping nebulae and then the point where you see the size of Pluto compared to Texas. Puts things into perspective. Try it out in full-screen mode: Copyright 2012. Embed this infographic on your site! <iframe width="600" height="388" scrolling="no" src=" frameborder="0" allowfullscreen></iframe><br />Copyright 2012. To get started with the infographic, click on one of the nine entry point images. The slider at the bottom of the screen lets you move around from bigger to smaller and smaller to bigger. And in between you see every day objects like animals and buildings and planets and stars. Have fun with this!

Hi, Vincent. Yes, we met again, and here. I am going to have a good night (not a day) because now in Greece is midnight. I wish you a nice day. Sakis by sakiskoukouvis Jan 13