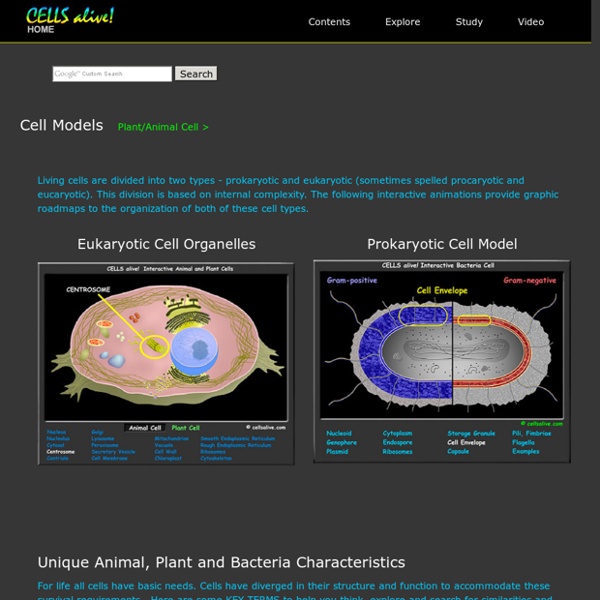 For life all cells have basic needs. Cells have diverged in their structure and function to accommodate these survival requirements. Here are some KEY TERMS to help you think, explore and search for similarities and significant differences that have become the characteristics of eukaryote (animal, plant) and prokaryotic (bacteria) cells. Examples might be searching: eukaryote prokaryote reproduction or animal plant cell energy. Reproduction / cell division Energy trapping, storage and consumption Form / shape / structure Cell specialization Compartmentalization of cell functions Communication within and beyond the cell Cell / organism survival

How to Search for Publicly Shared Google Docs, Slides, and Spreadsheets Searching by file type and searching by domains is a great way for students to refine their Google searches. Searching for and within a DOC, a PPT, or XLS file can lead students to resources that they might not otherwise have seen. But increasingly a lot of us are creating our documents, slides, and spreadsheets in Google Drive. DNA-RNA-Protein DNA carries the genetic information of a cell and consists of thousands of genes. Each gene serves as a recipe on how to build a protein molecule. Proteins perform important tasks for the cell functions or serve as building blocks. The flow of information from the genes determines the protein composition and thereby the functions of the cell. The DNA is situated in the nucleus, organized into chromosomes. Every cell must contain the genetic information and the DNA is therefore duplicated before a cell divides (replication).

Solar-powered sea slug harnesses stolen plant genes - life - 24 November 2008 Video: Watch a sea slug eat algae to nab some of its chloroplasts, and the genes that keep them functioning It's the ultimate form of solar power: eat a plant, become photosynthetic. Now researchers have found how one animal does just that. Elysia chlorotica is a lurid green sea slug, with a gelatinous leaf-shaped body, that lives along the Atlantic seaboard of the US. What sets it apart from most other sea slugs is its ability to run on solar power. Fallen Angel Names: Names of Fallen Angels The following list is of traditional fallen angel names gathered from different religions, mythologies and lore. These angel names are of those angels considered to be of a bad nature and not names of good angels. Fallen angel names find their roots within ancient cultures, such as Babylon, Assyria, and Egypt, as well as within Jewish, Christian and Muslim lore. Over thousands of years, angel names have evolved in spelling, meaning and use within religions, mysticism and magic, where the name of an angel is thought important in order to invoke angelic help. Some rituals are said to invoke good angels, while other rituals are performed to attempt to invoke fallen angels. Many good angel names include a suffix word meaning of God (-el), or yah, which means Lord.

Eternal inflation Eternal inflation is predicted by many different models of cosmic inflation. MIT professor Alan H. Guth proposed an inflation model involving a "false vacuum" phase with positive vacuum energy. Parts of the Universe in that phase inflate, and only occasionally decay to lower-energy, non-inflating phases or the ground state. In chaotic inflation, proposed by physicist Andrei Linde, the peaks in the evolution of a scalar field (determining the energy of the vacuum) correspond to regions of rapid inflation which dominate.

Membrane (M-theory) In string theory and related theories, D-branes are an important class of branes that arise when one considers open strings. As an open string propagates through spacetime, its endpoints are required to lie on a D-brane. The letter "D" in D-brane refers to the fact that we impose a certain mathematical condition on the system known as the Dirichlet boundary condition. The study of D-branes has led to important results, such as the anti-de Sitter/conformal field theory correspondence, which has shed light on many problems in quantum field theory. See also[edit]

Ergodic hypothesis The ergodic hypothesis is often assumed in the statistical analysis of computational physics. The analyst would assume that the average of a process parameter over time and the average over the statistical ensemble are the same. This assumption that it is as good to simulate a system over a long time as it is to make many independent realizations of the same system is not always correct. (See, for example, the Fermi–Pasta–Ulam experiment of 1953.)

Modal realism The term possible world[edit] The term goes back to Leibniz's theory of possible worlds, used to analyse necessity, possibility, and similar modal notions. In short: the actual world is regarded as merely one among an infinite set of logically possible worlds, some "nearer" to the actual world and some more remote. A proposition is necessary if it is true in all possible worlds, and possible if it is true in at least one. Main tenets of modal realism[edit] At the heart of David Lewis's modal realism are six central doctrines about possible worlds: Eternal return Eternal return (also known as "eternal recurrence") is a concept that the universe has been recurring, and will continue to recur, in a self-similar form an infinite number of times across infinite time or space. The concept is found in Indian philosophy and in ancient Egypt and was subsequently taken up by the Pythagoreans and Stoics. With the decline of antiquity and the spread of Christianity, the concept fell into disuse in the Western world, with the exception of Friedrich Nietzsche, who connected the thought to many of his other concepts, including amor fati. In addition, the philosophical concept of eternal recurrence was addressed by Arthur Schopenhauer. It is a purely physical concept, involving no supernatural reincarnation, but the return of beings in the same bodies.

Cyclic model A cyclic model (or oscillating model) is any of several cosmological models in which the universe follows infinite, or indefinite, self-sustaining cycles. For example, the oscillating universe theory briefly considered by Albert Einstein in 1930 theorized a universe following an eternal series of oscillations, each beginning with a big bang and ending with a big crunch; in the interim, the universe would expand for a period of time before the gravitational attraction of matter causes it to collapse back in and undergo a bounce. Overview[edit] In the 1920s, theoretical physicists, most notably Albert Einstein, considered the possibility of a cyclic model for the universe as an (everlasting) alternative to the model of an expanding universe. However, work by Richard C.