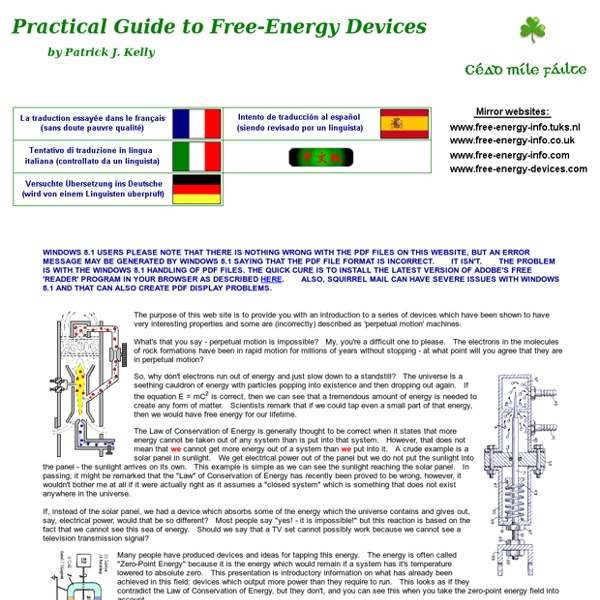 The purpose of this web site is to provide you with an introduction to a series of devices which have been shown to have very interesting properties and some are (incorrectly) described as 'perpetual motion' machines. What's that you say - perpetual motion is impossible? My, you're a difficult one to please. The electrons in the molecules of rock formations have been spinning steadily for millions of years without stopping - at what point will you agree that they are in perpetual motion? So, why don't electrons run out of energy and just slow down to a standstill? The universe is a seething cauldron of energy with particles popping into existence and then dropping out again.

Related:  zpe • ENERGY AND INNOVATION • On or Off grid energy • fergie213

Wind farms could become 'monuments of a failed civilisation', top environmentalist claims "We never intended a fundamentalist Green movement that rejected all energy sources other than renewable, nor did we expect the Greens to cast aside our priceless ecological heritage because of their failure to understand that the needs of the Earth are not separable from human needs." The veteran environmentalist added: "We need to take care that the spinning windmills do not become like the statues on Easter Island - monuments of a failed civilisation." The proposed tower would be installed in woodland close to his home in Broadwoodwidger, Devon. It has attracted fierce opposition from locals and he has now thrown his scientific reputation behind their campaign.

Caduceus Coil The Caduceus Coil Also called the Smith Coil or the Tensor Coil The caduceus coil is well known to some branches of orthodox science but largely neglected, waved away and often relegated to what is referred to as the realms of pseudoscience and free energy irrationality. However, many electronic experimenters have reported that they have observed numerous properties unexplained by this very same science. What the following represents is a veritable ocean of unexplored possibilities. To reject such things purely on the basis of lack of theory, when others have built the hardware and seen it working, is a strange brand of science. A description of a caduceus coil by Wilbert Smith. This Pedal-Powered Washing Machine Is Electricity-Free And Costs Only $40 By Amanda Froelich Everyone loves the smell and feel of clean clothes, but the amount of water and electricity needed for conventional washers isn’t exactly eco-friendly – or even accessible for those in third-world countries. Perhaps this pedal-powered washing machine, then, is one of the many solutions to the problem. The GiraDora washing machine, designed by Alex Cabunoc and Ji A You, is actually a combination washer and spin dryer that is powered by a foot pedal. The portable plastic tub can be filled with soap and water before a lid is placed on top, which acts as a seat. All the user needs to do, then, is rest on the washer and pump the spring-loaded foot pedal.

What Appliances Can You Power With Solar You can power many different devices from: 1. LED Light Bulbs – LED lights consume significantly less power for the brightness that they provide. They are a bit more expensive to buy but they last 50,000 hours, which is 5 times longer than CFL bulbs which only last 10,000 hours, and compared with incandescent bulbs which only last 1,200 hours. A 10 watt LED bulb is the equivalent of a 14 watt CFL bulb or a 60 watt incandescent bulb. You would save money in the long run because you don’t need to replace LED Light bulbs that often.

Italian company to sell portable cold fusion plant deliverable next year (Phys.org) —Italian company Energy Catalyzer (shortened to ECAT) has announced that it is right now taking preorders for its ECAT 1MW portable cold fusion plant. Founded by Italian scientist Andrea Rossi, the plant has the scientific community shaking its collective head—it's never been peer reviewed and neither Rossi nor anyone else at ECAT has ever published a single paper regarding cold fusion or describing how the plant works. Cold fusion, is of course, a theoretical means of harnessing enormous amounts of energy by fusing atoms together.

Science and Energy Index of articles from the Science in Society Archive on renewable energy. For articles in other categories, please see the SiS archive menu. Age of Oil Ending?Oil prices plunging to a five year low sparked a wave of downsizing in an industry desperate to rid itself of stranded assets; meanwhile renewable energy markets are booming with ‘100 % renewables’ on the climate action plan, and civil society grassroots movements are winning major campaigns to divest mega-investments from fossil fuels and leave oil in the groundDr Mae-Wan Ho 26th January 2015 Waste Plastics into Fuel Oil?One way to clear the existing mountains of waste plastics is to turn them into clean fuel oil; a company in New York appears to have done just that at a cost of 11 cents a gallon using unsorted, unwashed plastic wastes in a safe, environmentally friendly, and highly efficient process; but will this perpetuate our dependence on fossil fuel?