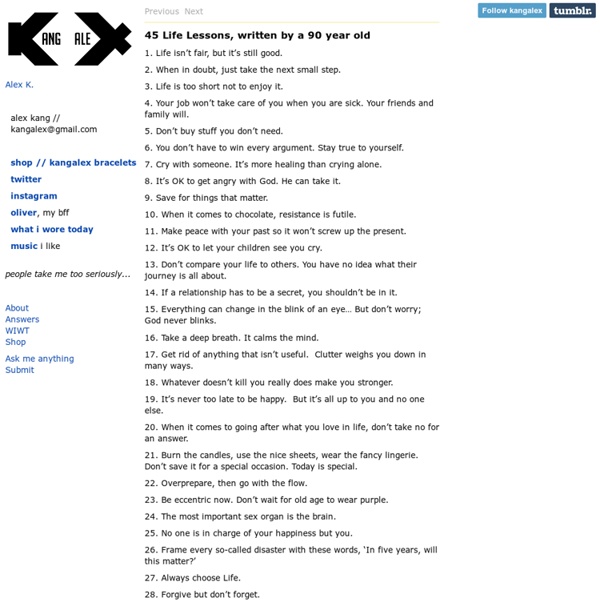 The SECRET for Undetectable Mind Control Unless you understand how reality is manifested, your destiny and the destiny of the planet will be in the hands of the ruling elite who do understand it. “Sometimes people don't want to hear the truth, because they don't want their illusions destroyed.” -Friedrich Nietzsche Living in the third dimension can be a blissful experience when you have power, health, wealth, comforts and freedom. That's what the ruling elite have manifested for themselves while the rest of the world struggles with poverty, disease, drug dependency, debt and servitude. The ultimate goal of the Illuminati is not only one world government. A Real-Time Map of Births and Deaths In 1950, there were 2.5 billion humans. Today there are just over 7 billion. In another 30 years, according to U.S. Census Bureau projections, there will be more than 9 billion. Brad Lyon has a doctoral degree in mathematics and does software development. He wanted to make those numbers visual.

16 things I know are true but haven't quite learned yet There’s a difference between knowing something and living as if it were true. At the end of 2013, these truths are all lingering on that awkward threshold, for me anyway. 1) The sooner you do something, the more of your life you get to spend with that thing done — even though it takes less effort (or at least no more) than it will later. It’s the ultimate sure-thing investment and I pass it up all the time. 2) I never regret working out. Mental Heuristics Page A heuristic is a "rule-of-thumb", advice that helps an AI program or human think and act more efficiently by directing thinking in an useful direction. Some of these heuristics are age-old wisdom, bordering on cliche, but most are actually helpful. If you want something done, do it yourself Comment: Obviously true, and doing it is usually very good for your self esteem. A surprising amount of work can be done this way, and experts are not always necessary. However, there is a risk of becoming overworked if you try to do everything yourself - we all need other people after all.

True Blood: Personality and Blood Types in Japan A blood type towel: not as gross as it sounds. Sometimes, it’s the small cultural differences you notice more than the big ones. For me, one of the most interesting things about Japanese culture is the fascination with blood types. It’s a pretty small aspect of Japanese culture, but it’s so different from what I’m used to in the United States that it really catches my attention. So what does Japan think about different blood types? In Japan, blood types are linked with personality. 30 Of The Hardest (But Most Necessary) Things That Must Be Done To Achieve Success Success is defined differently for everyone; however, facing difficulties on the road to success is a common denominator for anyone pursuing his or her passions. What separates those who see their dreams through and those who don’t is the ability to do what others will not. Everyone can dream of eventual success, but accomplishing one’s goals requires taking on the difficult tasks and functions for which many people do not have the courage or stamina. Winston Churchill said, “Success is not final, failure is not fatal: It is the courage to continue that counts.” Taking on the hard tasks time and time again is what defines a person’s character and generates the most rewarding results. Success is not a tangible product.

- StumbleUpon 1. If the enemy is in range, so are you. 2. Incoming fire has the right of way. 3. Is Google God? By Matt MacPherson Google is the closest thing to an Omniscient (all-knowing) entity in existence, which can be scientifically verified. She indexes over 9.5 billion WebPages, which is more than any other search engine on the web today. Motivational Quote Monday (28 Photos) » The Drop Kings Start your week on a positive note with some motivational quotes… For some more inspiration check out some motivating posters illustrated by Ryan McArthur…

Related:
Related:  lifestyle   -  Life's Secrets   -  Self improvment   -  Secrets Unsealed   -  Dreaminthelife.com   -  30 Challenges for 30 Days   -  The Official CIA Manual of Trickery and Deception: H. Keith Melton, Robert Wallace: 9780061725906: Amazon.com: Books   -  Amazing Posts: Life's Instructions   -  12 Practical Steps for Learning to Go With the Flow : zenhabits   -  10 Stubborn Food Myths That Just Won't Die, Debunked by Science   -  Carl Sagan on marijuana - YouTube   -  Carl Sagan attempts to debate with a creationist - YouTube   -  101 Important Questions To Ask Yourself | Personal Excellence   -  50 Adorable Animals To Melt Your Heart | The Design Inspiration   -  101 Ways To Live Your Life To The Fullest   -  7 Things Highly Productive People Do | Inc.com   -  Collecting rainwater now illegal in many states as Big Government claims ownership over our water   -  Work Abroad Sites and Resources - Flashpacker Headquarters   -  Polo Museale Fiorentino :: Sito Ufficiale   -  Shawn Achor: The happy secret to better work | Video on TED.com   -  25 Napping Facts Every College Student Should Know - Online College Courses   -  4h10 | Bikes, Lifestyle & More   -  Lifestyle Mirror: Shop the Style   -  10 of the Most Surprising Findings from Psychological Studies   -  Bucket List: 225 Things to Do Before You Die – Life'd   -  TEDxTeen - Tavi Gevinson: Still Figuring it Out - YouTube   -  How To Make Your Own Lotion Bars! | One Good Thing by Jillee   -  The 9 nastiest things in your supermarket | MNN - Mother Nature Network   -  9 Principles of Japanese Art and Culture   -  Rabbit38   -  20 Things I Should Have Known at 20   -  25 Great Motivational Quotes You've Never Heard Of - A Daring Adventure   -  How to Put Your Hair Up In A Cute Bun « Hairstyling   -  Welcome to StyleCraze - World's Largest Beauty Community   -  An Essay by Einstein -- The World As I See It   -  How to suck at your religion   -  Awesome Stuff to Buy - Find Cool Things to Buy