It’s Ayn Rand’s America now: Republicans have stripped the country of its last shred of morality 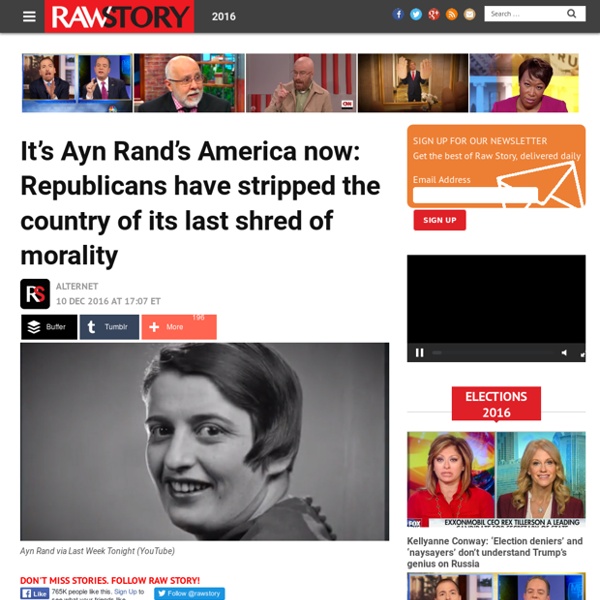 Ronald Reagan and The Great Social Security Heist : FedSmith.com View this article online at Ronald Reagan was one of the most popular presidents in modern history. As a former Hollywood actor, he had an uncommon degree of charisma. The conservatives absolutely loved Reagan for his efforts to reduce the size of government, but most liberals hated him with a passion. After the Election: ‘What a Pathetic Thing Is Decadence’ Today is finally Election Day, mercifully. Our tireless politics team is live-blogging events throughout the day and into the night. Over the past several weeks, scores and scores of your emails have poured in, covering a wide array of campaign topics, so here’s one final roundup of your smart opinions and analyses as the polls open this morning. (They’re already closed in Dixville Notch, New Hampshire, the first vote in the nation, and in that tiny hamlet Clinton beat Trump in a landslide, 4-2—a harbinger, we hope.)

What So Many People Don’t Get About the U.S. Working Class My father-in-law grew up eating blood soup. He hated it, whether because of the taste or the humiliation, I never knew. His alcoholic father regularly drank up the family wage, and the family was often short on food money. They were evicted from apartment after apartment. He dropped out of school in eighth grade to help support the family.

World's richest 1% grabbed 82% of all wealth created in 2017, Oxfam study finds - Jan. 21, 2018 That's according to a new report from Oxfam International, which estimates that the bottom 50% of the world's population saw no increase in wealth. Oxfam says the trend shows that the global economy is skewed in favor of the rich, rewarding wealth instead of work. "The billionaire boom is not a sign of a thriving economy but a symptom of a failing economic system," said Winnie Byanyima, executive director of Oxfam International. The head of the advocacy group argued that the people who "make our clothes, assemble our phones and grow our food" are being exploited in order to enrich corporations and the super wealthy. The study, released ahead of the World Economic Forum in Davos, was produced using data from Credit Suisse's (CS) Global Wealth Databook. Related: 5 ways the world is pulling apart

Maybe This is What Life is About – The Mission – Medium From the end to the beginning, people are the point. Yes, the ones you’re going to see today. Yes, the people you are going to see tomorrow. You may write the next Harry Potter and make a ton of money.

Koch Dark-Money Operative Is Trump's Liaison to Congress - BillMoyers.com Activists hold a protest near the Manhattan apartment of billionaire and Republican financier David Koch on June 5, 2014 in New York City. The demonstrators were protesting against the campaign contributions by the billionaire Koch brothers who are owners of Koch Industries Inc. (Photo by Spencer Platt/Getty Images) This post originally appeared at PRwatch.org. When the history of Donald Trump’s administration is written, people may point to the appointment of a Koch Brothers operative to a little-known White House position as a turning point in Trump’s evolution from unorthodox Republican candidate to doctrinaire corporate politician.

US in the middle of a coup by Donald Trump - The Independent The US is in the middle of a coup and hasn't realised, according to Michael Moore. The filmmaker and journalist, who was one of the few famous people to publicly predict that Donald Trump would become President, has warned that the US state is being overthrown by Mr Trump and the people he has appointed to govern alongside him. Linking to a New York Times piece about the role of senior advisor Steve Bannon, he posted on Twitter: "If you're still trying to convince yourself that a 21st century coup is not underway, please, please snap out of it". Deaf children losing out as English councils cut support, charity warns More than a third of councils in England are cutting educational support totalling £4m for deaf children, according to figures obtained by the National Deaf Children’s Society (NDCS). The figures, gained through freedom of information requests, show that councils in these areas are cutting 10% on average from deaf children’s services, which the charity warns are already near breaking point. In the last four years, one in 10 specialist teachers of the deaf have been cut, the charity claims.

Thoughts About Think Tanks: Are They Biased? Click 2x What Is a Think Tank? We've all heard of think tanks, but many people don't know exactly what think tanks do and what their influence is over public opinion and policies. A think tank is an organization that conducts research and attempts to influence public policy in many different areas including business and finance, economics, education, fiscal policy, defense, security, technology, science, foreign affairs, health and science and political strategy. There are think tanks all over the world, but the United States has by far the most – a whopping 1815 think tanks with 14.66 trillion dollars being poured into these idea factories.

The Rich Line Up at the White House ATM – BillMoyers.com Based on the assets revealed in recent financial disclosure reports, presidential advisers Kellyanne Conway, Jared Kushner and Steve Bannon are key players in the wealthiest administration in American history, making decisions that greatly impact less well-off Americans. (Photo by Mandel Ngan/AFP/Getty Images) Some of the latest hooey uttered by White House press secretary Sean Spicer — the man from whom a seemingly bottomless wellspring of hooey flows — was his pronouncement the other day that having so many fabulously wealthy men and women working in the White House is a good and wondrous thing. “The president has brought a lot of people into this administration, and this White House in particular, who have been very blessed and very successful by this country, and have given up a lot to come into government by setting aside a lot of assets,” Spicer said.

Future - A vast new tomb for the most dangerous waste in the world World leaders jostle with global executives and anonymous men dressed in full camouflage as platters of shrimp, foie gras and cheesecake are passed around by white-gloved staff. It would all seem quite normal were it not for the fact that we’re just 100m (330ft) away from the site of the worst nuclear disaster in history. Chernobyl's renewal Check out a photo gallery of life inside the exclusion zone Saudi Arabia accused of torturing female activists by electrocution and flogging leaving them unable to walk Campaigners have accused Saudi Arabia of subjecting several activists, including female human rights defenders, imprisoned since May to torture and sexual harassment. More than a dozen women’s rights activists have been detained for months, most of whom had campaigned for the right to drive and an end to the Kingdom’s male guardianship system, but some have since been freed. A group of UN experts last month called for the immediate release of six female human rights defenders they said were still being held incommunicado in Saudi Arabia.