Mail Online Readers Angry At 'Ridiculous' Claire Cisotti House Moving Article Following Storm Flood Chaos. A Mail Online story of a “devastated” woman who has to move from the country to London for work has been slammed by its readers for being “utterly absurd” and “ridiculous”. 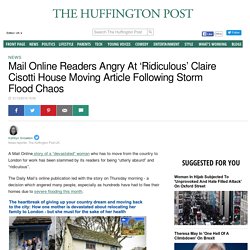 The Daily Mail’s online publication led with the story on Thursday morning - a decision which angered many people, especially as hundreds have had to flee their homes due to severe flooding this month. As Brexit Looms, Prime Minister Theresa May Looks to the Future of British Fashion. LONDON, United Kingdom — Just as the Marc Jacobs show was closing New York Fashion Week across the Atlantic, scores of London-based designers, editors, buyers, executives and educators — from Christopher Bailey and Dame Vivienne Westwood to Vogue’s Alexandra Shulman and Browns founder Joan Burstein — assembled yesterday evening at 10 Downing Street, home of the new British Prime Minister Theresa May, as the unofficial kick off to London Fashion Week. 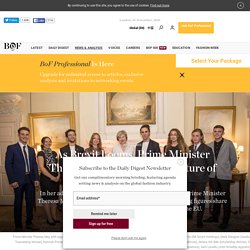 As the ornate room filled with people, guests wondered aloud, “Is she actually going to show up?” And if she did, “what will she say?” Ultra-skinny models were meant to have been banished from catwalks. So SARAH VINE was horrified by Posh's new show. Despite all the bluster, there is one currency in fashion that never loses its value: skinniness. 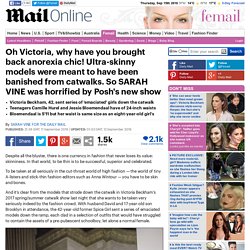 In that world, to be thin is to be successful, superior and celebrated. To be taken at all seriously in the cut-throat world of high fashion — the world of tiny A-listers and stick-thin fashion editors such as Anna Wintour — you have to be skin and bones. And it’s clear from the models that strode down the catwalk in Victoria Beckham’s 2017 spring/summer catwalk show last night that she wants to be taken very seriously indeed by the fashion crowd. With husband David and 17-year-old son Brooklyn in attendance, the 42-year-old former Spice Girl sent a series of emaciated models down the ramp, each clad in a selection of outfits that would have struggled to contain the assets of a pre-pubescent schoolboy, let alone a normal female. Haunted: Teen model Jessie Bloemendaal is 5ft 11in and has a tiny 24in waist. Victoria Beckham defends use of skinny models at New York fashion week. Victoria Beckham has rounded on critics who complained about the choice of ultra slim models in her latest catwalk show. 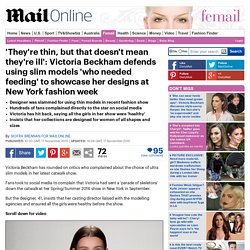 Fans took to social media to complain that Victoria had sent a 'parade of skeletons' down the catwalk at her Spring/Summer 2016 show in New York in September. But the designer, 41, insists that her casting director liaised with the modelling agencies and ensured all the girls were healthy before the show. Scroll down for video Victoria came under fire for choosing a gaunt looking Peyton Knight, 17, to close her Spring/Summer 2016 show at New York fashion week in September The collection was well received by fashion critics, but the designer received hundreds of complaints on social media for choosing ultra thin models to showcase her latest pieces. Tamara Mellon Sues Jimmy Choo. Gigi New York Issues Cease And Desist To Tommy Hilfiger. OFF the back of Tommy Hilfiger's star-studded, fairground-themed extravaganza in New York last week, the fashion house is facing the potential of legal action from a fellow American brand. 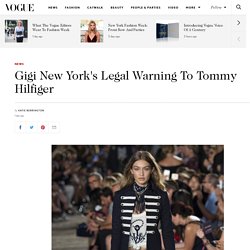 Leather goods label Gigi New York has issued a cease and desist letter over the Tommy X GiGi collection - the brand's collaboration with Gigi Hadid, which debuted on the runway last week. It became available to buy immediately following the show as part of Tommy Hilfiger's move to see-now, buy-now. "GiGi New York issued a cease and desist order to Tommy Hilfiger last week after discovering the misuse of its mark on product and in marketing of handbags in Tommy Hilfiger's autumn/winter 2016 collection," a statement released by Gigi New York asserted. 7 Lessons For Retail in the Age of E-Commerce. Rethinking Luxury CEO Pay. LONDON, United Kingdom — It is not so long ago that the share performances of luxury goods stocks were closely correlated, as strong growth throughout the industry masked differences in individual performance. 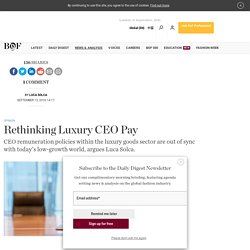 Over the long term, however, the actual returns for investors within the sector have become more uneven. In other words, some companies — and their investors — are making more money on their investment than others. This being the case, it would be reasonable if managers were encouraged — and incentivised — to achieve high returns. How Does Politics Affect the Fashion Industry? Fierceness and fabulousness aside, the fashion industry is a serious (and lucrative) business. 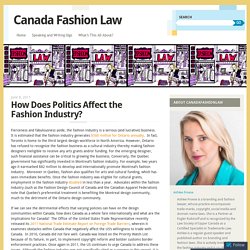 It is estimated that the fashion industry generates $500 million for Ontario annually. In fact, Toronto is home to the third largest design workforce in North America. However, Ontario has refused to recognize the fashion business as a cultural industry thereby making fashion designers ineligible to receive any arts grants and/or funding. For the emerging designer, such financial assistance can be critical to growing the business. Styling Politicians in the Age of Image Wars. PHILADELPHIA, United States — “Trump has a budget, Sanders has a budget, Hillary has a budget,” says Corey Roche, a personal stylist whose clients include politicians in Washington DC. 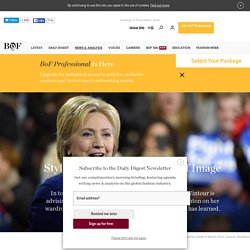 “There is [campaign] money allocated to fashion and clothes, because that is a huge part of marketing and branding.” Indeed, in today's media-saturated world, image is a key communications tool for heavyweight politicians as they craft their personal brands and election campaigns. Like actors, athletes and other celebrities, many major American politicians employ stylists and other image consultants. But the business of dressing politicians — some of the most heavily scrutinised public figures — comes with a unique set of challenges. At major political events like this week’s Democratic National Convention in Philadelphia, where Democratic party nominee Hillary Rodham Clinton is scheduled to make her acceptance speech on Thursday, the level of scrutiny is higher than ever.