The Taming of the Shrewd. Arvind Kejriwal: Getting Even With the Odd Chief Minister. The last month of 2015 was a trying month for the Aam Aadmi Party government in Delhi. 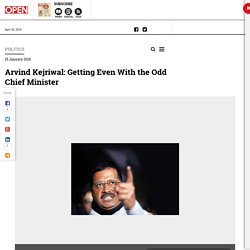 Less than a year since its leader Arvind Kejriwal had swept the state’s Assembly polls to become Chief Minister with 67 legislators in a house of 70, delivering a blow to a BJP basking in the glow of its all-India victory just half a year earlier, the government found itself lurching from crisis to crisis. It was subjected to a scathing rebuke from the Judiciary over its inability to curb air pollution, an embarrassing raid was carried out by the Central Bureau of Investigation (CBI) that sealed the office of one of its key officers, nearly 200 of its bureaucrats went on a one-day strike, and Union Finance Minister Arun Jaitley filed a defamation suit against Kejriwal for making allegations that linked him with financial irregularities at the Delhi & District Cricket Association (DDCA).

The good old typewriter is history now, but the movie seems to have left an imprint on the Delhi government. On Ambedkar's disappointment with the final draft of India's Constitution - The Caravan. On 29 August 1947, a Draft Committee was formed to prepare a draft constitution under the chairmanship of BR Ambedkar. 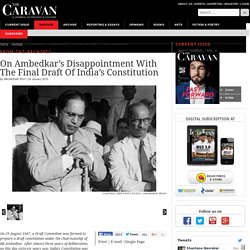 After almost three years of deliberation, on this day sixty-six years ago, India's Constitution was put into effect. In this excerpt from Arundhati Roy's essay in our March 2014 issue, 'The Doctor and the Saint,' Roy comments on the conflict Ambedkar faced, both within himself and with the newly formed Constituent Assembly, as he tried to draft a document "more enlightened than the society it was drafted for. " History has been unkind to Ambedkar. First it contained him, and then it glorified him. Forget Modi, Someone Else Is Running India's Show. As India’s politicians bicker, its Supreme Court judges are taking the lead in shaping policy. 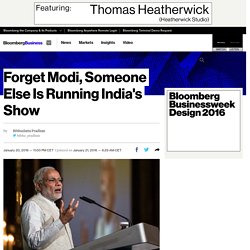 In the past six months, Indian courts doubled a tax on commercial vehicles entering Delhi, banned bullfighting and -- most controversially -- struck down a constitutional amendment that would give politicians a role in picking judges. Soon they will decide on the legality of 4G mobile-phone licenses and mining activities in the south. The speed at which India’s courts are handing down decisions contrasts with Prime Minister Narendra Modi’s struggle to push major legislation through parliament, including a national sales tax. The power of judges has also spawned a debate: Proponents view them as an antidote to India’s gridlock and a check on corrupt politicians, while detractors see a threat to democracy and a risk for investors. Business Standard Mobile Website. If Prime Minister Narendra Modi fails to live up to the expectations that he has raised, it will not be entirely his fault. 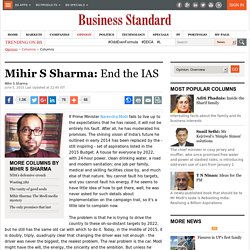 After all, he has moderated his promises. The shining vision of India's future he outlined in early 2014 has been replaced by the - still inspiring - set of aspirations listed in the 2015 Budget. A house for everyone by 2022, with 24-hour power, clean drinking water, a road and modern sanitation; one job per family, medical and skilling facilities close by, and much else of that nature. 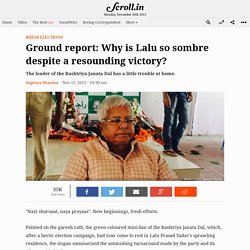 New beginnings, fresh efforts. Painted on the gareeb rath, the green coloured mini-bus of the Rashtriya Janata Dal, which, after a hectic election campaign, had now come to rest in Lalu Prasad Yadav's sprawling residence, the slogan summarised the astonishing turnaround made by the party and its 67-year-old chief. In India, Many Voters May See Corruption as the Lesser Evil. From the counting room to the newsroom: How TV channels messed up the Bihar election results. Slow and steady still wins the race. 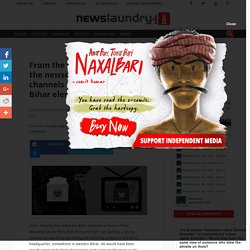 In the frantic world of TV news too. Arunabh Saikia Arunabh Saikia studied mechanical engineering, wanted to be a poet, but became a journalist. His short stories & essays occasionally get published in literary magazines. As our pro bono outreach programme we’ve agreed to listen to his poetry as long as he writes good pieces for us. Why Development in Bihar is About Social Justice. While it has now become a cliché to condemn Lalu Prasad Yadav for presiding over Bihar’s alleged descent into ‘casteist’ lawlessness from 1990 to 2005, his achievements cannot be overlooked RJD chief Lalu Prasad addressing a press conference at his party office in Patna on Saturday. 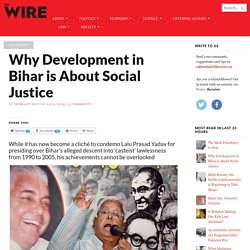 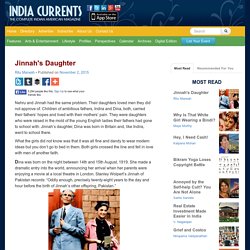 Their daughters loved men they did not approve of. Children of ambitious fathers, Indira and Dina, both, carried their fathers’ hopes and lived with their mothers’ pain. They were daughters who were raised in the mold of the young English ladies their fathers had gone to school with. Jinnah’s daughter, Dina was born in Britain and, like Indira, went to school there. What the girls did not know was that it was all fine and dandy to wear modern ideas but you don’t go to bed in them. Dina was born on the night between 14th and 15th August, 1919. When Dina was introduced to Neville Wadia she was 17 years old. Neville was born to a Parsee father and a Christian mother. Jinnah and RuttieJinnah, you see, was no stranger to love. Photo: Courtesy Dr.

An open letter to Anupam Kher: ‘Where were you when…’ is a lazy argument to make. Why should our silences of the past disqualify us from ever speaking again? 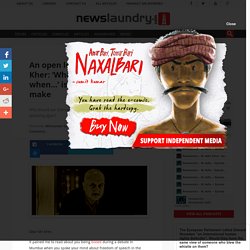 Abhinandan Sekhri Founding partner of Small Screen and newslaundry, Abhinandan Sekhri was a researcher at Newstrack and went on to become a reporter, always managing to do the story that was dropped. He scripted the political satire shows The Great Indian Tamasha and Gustakhi Maaf on NDTV’s news channels between 2004 and 2009. So he thinks he’s funny. Thinks! | Nov 2, 2015 in Criticles, Featured | 126 Comments Dear Mr Kher, It pained me to read about you being booed during a debate in Mumbai when you spoke your mind about freedom of speech in the context of the many artistes, scientists and writers returning their awards, protesting against what they feel is a climate of intolerance. Almost all the films that I associate my growing years with had you playing a major part.

This article is made possible because of Newslaundry's subscribers.Click here and Pay To Keep News Free. Perceptions matter: It’s no coincidence that the narrative of rising intolerance has been peaking around elections. It has been some months now since news reports of attacks on churches in India disappeared from the headlines. 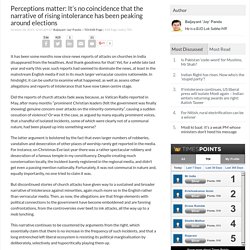 And thank goodness for that! Yet, for a while late last year and early this year, such reports had seemed to dominate the news, at least in the mainstream English media if not in its much larger vernacular cousins nationwide. In hindsight, it can be useful to examine what happened, as well as assess other allegations and reports of intolerance that have now taken centre stage.

Tehelka - Investigations, Latest News, Politics, Analysis, Blogs, Culture, Photos, Videos, Podcasts. The Alibis of a Chief Executive. In India, an entire industry is busy creating excuses to defend the Prime Minister from various misdemeanours by his associates Prime Minister Narendra Modi. Credit: PTI Amongst democracies, only in India is it possible that an elected Prime Minister has a set of fool-proof alibis that protect him from taking responsibility for the events taking place in various parts of the country. Our federal structure, the actions of so-called ‘fringe elements’, or unruly coalition partners – one or the other is deployed time and again to insulate the chief executive of the country from all blame. Therefore, when Prime Minister Narendra Modi speaks up only to ask how the Centre is responsible for the shameful events in Dadri or Mumbai, it comes as a surprise to none. Many analysts have rightly compared US President Barack Obama’s outright condemnations of every event of gun violence with his good friend Narendra Modi’s obfuscatory remarks that came after a long spell of studied silence.

This isn’t how you use data: A data-backed response to Rupa Subramanya. Subramanya, the young researchers argue, is already convinced of a conclusion, which she wants to support through any convenient digits. | Oct 21, 2015 in Criticles | 44 Comments As we write this, there are already reports in the media about another incident of mob-lynching over the bovine issue, this time in Himachal Pradesh. Can communal riots be addressed with statistics? We must fight the intangible intolerance that makes it heroic to kill for no reason other than difference of thought and belief.

Madhu Trehan Madhu Trehan is the founding editor of India Today, founder of Newstrack, senior journalist and writer, and also founding partner of newslaundry. Has Lok Sabha TV Become a Mouthpiece for the Government? After the Lok Sabha TV (LSTV) channel was launched in 2006, my bureaucrat father would often call home during parliament sessions, ask us to switch the television on, play the channel and leave the telephone receiver next to the television.

He would then listen to the proceedings for hours. LSTV—conceived of by the former Speaker of the Lok Sabha, Somnath Chatterjee as an instrument to acquaint citizens with the functioning of the parliament—was meant for such dedicated viewership. As Paranjoy Guha Thakurta, a former consultant for LSTV who was an anchor for the shows Talktime and 1-on-One on the channel from March 2007 to 2015, told me, “The channel was never market-driven. And it was unique in the sense that it was owned by the lower house. It was supposed to be didactic, informative and educative, unlike the screaming on private news channels.”