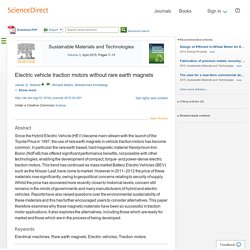 In particular the rare earth based, hard magnetic material Neodymium Iron Boron (NdFeB) has offered significant performance benefits, not possible with other technologies, enabling the development of compact, torque- and power-dense electric traction motors. This trend has continued as mass market Battery Electric Vehicles (BEV) such as the Nissan Leaf, have come to market. However in 2011–2012 the price of these materials rose significantly, owing to geopolitical concerns relating to security of supply. Keywords Electrical machines; Rare earth magnets; Electric vehicles; Traction motors 1. 1.1. The sintered Neodymium Iron Boron (NdFeB) hard magnetic material was patented by Sumitomo Special Metals in 1983 [1] (Fig. 1) and brought about a step change in terms of electric motor performance. Why Donald Trump is no Mitt Romney, in 1 chart.

Donald Trump (Seth Perlman/AP) Donald Trump has won 19 of the 32 contests so far in the Republican presidential primary race. 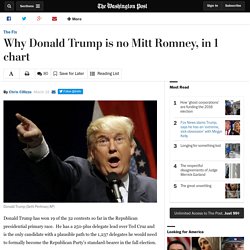 He has a 250-plus delegate lead over Ted Cruz and is the only candidate with a plausible path to the 1,237 delegates he would need to formally become the Republican Party's standard-bearer in the fall election. Far from uniting behind Trump, however, the national party -- or at least many of its leaders -- continue to huddle in hopes of devising a plan to stop him. The latest: House Speaker Paul D.

Ryan (Wis.) met with a number of major donors, including New York financier Paul Singer, on Thursday in Florida to discuss their options when it comes to Trump. That's a far cry from how the party treated Mitt Romney in 2012. Campaign 2016 Email Updates Get the best analysis of the presidential race. You’ve signed up for email updates on this story. Please provide a valid email address. Two things immediately jump out at me from the chart: A King in His Castle: How Donald Trump Lives, From His Longtime Butler.

6 Things Ted Cruz Wants You to Forget. For the last few days, cable news has been all Ted Cruz all the time. 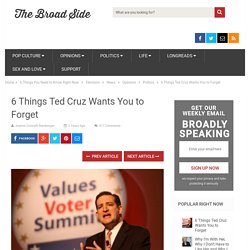 His 23-hour rant about Obamacare on the floor of the Senate? He wants you to think it was a filibuster to sound all grand and champion-like, but under the rules of the Senate, it wasn’t. He was not up against any extreme restrictions like his fellow Texan Wendy Davis was during her actual filibuster and his speech did nothing to prevent a vote on a bill, as Davis’ efforts did.

His effort really served only two purposes: (1) his own self-aggrandizement; and (2) to have his tea party fans focus on his Green Eggs and Ham moment in order to keep attention off some other things about him: 1. 2. 3. 4. American Communities Project. JCVJean-Claude Van Damme Just Took Over A Mainstream News Show To Expose The Ruling Class Elite D Is "Aware" And Speaks About Rothschild/Rockefeller Familes. The Story Of Your Enslavement In A Captivating Video. This video explains how our freedom was taken from us and how we can get it back. 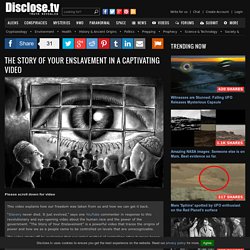 “Slavery never died. It just evolved,” says one YouTube commenter in response to this revolutionary and eye-opening video about the human race and the power of the government. “The Story of Your Enslavement” is a powerful video that traces the origins of power and how we as a people came to be controlled on levels that are unrecognizable.

The video starts off by explaining that our initial method of controlling other humans began when we became afraid of death, injury, and pain. Not only did we become controllable at just the threat of death, but we became valuable resources to those seeking to gain power and exploit other humans. Our enslavement travels and evolves throughout time, as the video explains, and has seen many different phases of evolution. This video even delves into why it seems that citizens have liberties and that the government is protecting them. How Obama Plans To Stay Longer In The White House – Departed. Washington, DC — President Barack Obama shocked the country this morning with news that he is running for a third term. 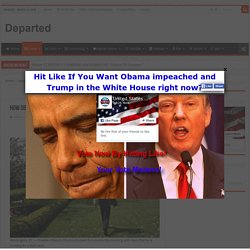 “I can’t abandon the American people now when they need me more than ever,” Obama told reporters at a press conference this morning. “We’ve come this far as a nation, now is not the time to do something different. This is the change you wanted and this is the change you’re getting.” Senator Rand Paul of Kentucky told CNN he does not agree with Obama and his announcement. “This defies everything the Constitution stands for,” Paul said. In the history of this country only two presidents have served more than two terms, Theodore Roosevelt and Franklin D.

A bill to abolish the 22nd Amendment was recently introduced into Congress by New York Democratic Rep. Paul Horner who is a spokesman for the Obama Administration told reporters how amazing this news is for the country.