(2) What the 1% Don't Want You to Know. (2) How American CEOs got so rich. 30 Major U.S. Companies Spent More on Lobbying than Taxes. Eamon Murphy, AOL.com Dec 13th 2011 11:00AM Thirty large American corporations spent more money on lobbying than they paid in federal taxes from 2008 to 2010, according to a report from the nonpartisan reform group Public Campaign. 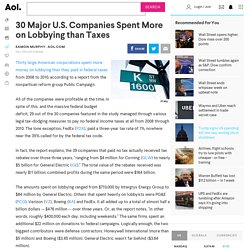 All of the companies were profitable at the time. In spite of this, and the massive federal budget deficit, 29 out of the 30 companies featured in the study managed through various legal tax-dodging measures to pay no federal income taxes at all from 2008 through 2010. The lone exception, FedEx (FDX), paid a three-year tax rate of 1%, nowhere near the 35% called for by the federal tax code.

In fact, the report explains, the 29 companies that paid no tax actually received tax rebates over those three years, "ranging from $4 million for Corning (GLW) to nearly $5 billion for General Electric (GE). " The amounts spent on lobbying ranged from $710,000 by Intergrys Energy Group to $84 million by General Electric. 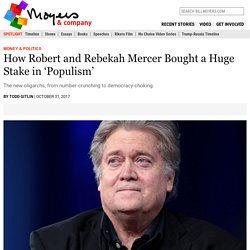 (Photo by Gage Skidmore/ flickr CC 2.0) A hoary riddle comes to mind. Question: Where does an 800-pound gorilla sit? Daily Reads: Sen. Corker on the Hot Seat for Tax Bill Reversal; Bill Will 'Turbocharge' Inequality in US – BillMoyers.com. Editor’s Note: Tomorrow will be the last day for our Daily Reads post and newsletter. 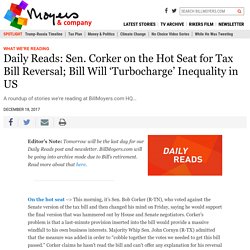 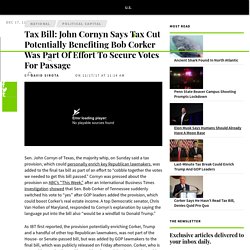 John Cornyn of Texas, the majority whip, on Sunday said a tax provision, which could personally enrich key Republican lawmakers, was added to the final tax bill as part of an effort to “cobble together the votes we needed to get this bill passed.” The GOP tax plan is filled with petty cruelties aimed at the vulnerable and the middle class. Here&apos;s a list. Trump ally Robert Kraft revealed as longtime owner of offshore firm. 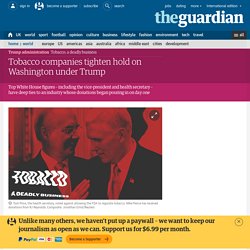 Day one of Donald Trump’s presidency started with tobacco donations, senior figures have been put in place within the Trump administration who have deep ties to tobacco, and lobbying activity has increased significantly. “As in so many areas, the promise to drain the swamp has been an extraordinary hypocrisy,” said Senator Richard Blumenthal, who supported anti-tobacco legislation and was one of the US attorneys general to broker a hundred-billion-dollar settlement with tobacco companies in the 1990s. “Many of his appointees have deep commitments to the tobacco industry,” he said. “Tobacco industry influence in Washington is pervasive, in many different ways,” Blumenthal said. It's Official: How the Koch Brothers Killed Trump’s Job Plan. It’s Official: How the Koch [...] 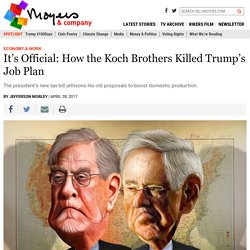 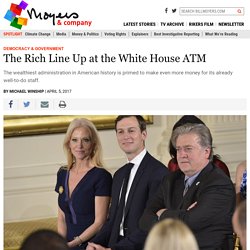 (Photo by Mandel Ngan/AFP/Getty Images) Some of the latest hooey uttered by White House press secretary Sean Spicer — the man from whom a seemingly bottomless wellspring of hooey flows — was his pronouncement the other day that having so many fabulously wealthy men and women working in the White House is a good and wondrous thing. “The president has brought a lot of people into this administration, and this White House in particular, who have been very blessed and very successful by this country, and have given up a lot to come into government by setting aside a lot of assets,” Spicer said. “… People are often told they have to sell an asset or get rid of something to come serve in the government. 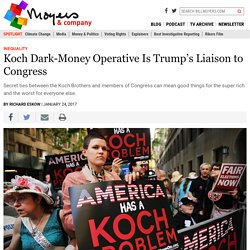 The demonstrators were protesting against the campaign contributions by the billionaire Koch brothers who are owners of Koch Industries Inc. (Photo by Spencer Platt/Getty Images) This post originally appeared at PRwatch.org. When the history of Donald Trump’s administration is written, people may point to the appointment of a Koch Brothers operative to a little-known White House position as a turning point in Trump’s evolution from unorthodox Republican candidate to doctrinaire corporate politician. The GOP of 2017 is the most extreme party coalition since the Civil War. Chip Somodevilla/Getty Images The Republican Party in 2017 isn’t an ordinary political party. 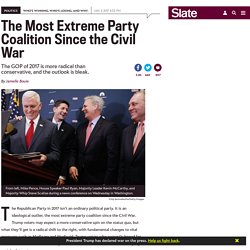 It is an ideological outlier, the most extreme party coalition since the Civil War. It’s Ayn Rand’s America now: Republicans have stripped the country of its last shred of morality. What Trump and the G.O.P. Can Agree On: Tax Cuts for the Rich. Beyond sharply cutting income tax rates across the board, both Mr. 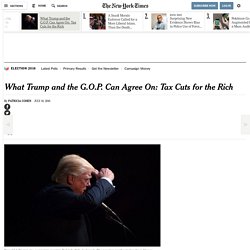 Trump and the House Republicans would eliminate the (which currently applies to only about 5,300 of the richest families); end the 3.8 percent surtax on high earners’ investment income, which helps pay for health coverage for lower-income Americans; and scrap the , which is aimed at making it harder for the affluent to take advantage of various tax breaks. But they reach those goals by different paths. While the Trump plan stays squarely within the traditional framework of an income tax, the Ryan plan takes a giant step toward taxing what people spend. Alan Viard, a tax expert at the conservative American Enterprise Institute and a proponent of consumption taxes, explained the difference. Koch Brothers lose big, Seattle voters pass I-122. Oil SCUM. The men who crashed the world.

Weight of Chains. Courting Business. In Antonin Scalia’s thirty years on the Supreme Court, his name became a byword for social conservatism. And when Senate Majority Leader Mitch McConnell announced that the Senate would refuse to consider any replacement President Obama nominates it was natural that opponents of same-sex marriage and abortion were relieved. Yet Scalia’s death will have only a limited impact on the culture wars, because regarding many social issues he was already in the minority on the Court.

But there is one area where the question of his replacement has huge consequences: business. As a member of the Court’s conservative majority, Scalia played a key role in moving American law in a more corporate-friendly direction. Now that majority is gone, and a huge amount rides on what happens next. Under Chief Justice John Roberts, the Court has not gone as far in limiting government power over the marketplace as many conservatives would have liked. The ‘Anti-Knowledge’ of the Elites. This post was first published at Consortium News. In a previous piece, I described how the Republican Party and its ideological allies in the fundamentalist churches have confected a comprehensive media-entertainment complex to attract low-information Americans and turn them into partisans.

It would be comforting to believe that somewhere in the commanding heights of our permanent government, there are important players who are serious grownups who know what they are doing. Why Today’s GOP Crackup Is the Final Unraveling of Nixon’s ‘Southern Strategy’ Fresh chatter among Washington insiders is not about whether the Republican Party will win in 2016 but whether it will survive. Donald Trump—the fear that he might actually become the GOP nominee—is the ultimate nightmare. Some gleeful Democrats are rooting (sotto voce) for the Donald, though many expect he will self-destruct. Nevertheless, Republicans face a larger problem.

The GOP finds itself trapped in a marriage that has not only gone bad but is coming apart in full public view. NSA Rats Out Republicans, Proves Netanyahu Bribed Them Against Iran Nuclear Deal Bipartisan Report. Politics can certainly make for a strange bedfellow. In this spy versus spy world, longtime bosom buddies Israel and America have been spying on each other for decades, even as they help each other spy on the rest of the world. As former Republican chairman of the House Intelligence Committee, Mike Rogers once stated, “Intelligence professionals have a saying: There are no friendly intelligence services.” Proving that Rogers was absolutely correct in his statement, the Wall Street Journal just uncovered hard evidence that Israeli Prime Minister Benjamin Netanyahu attempted to bribe Republicans for nay votes on America’s nuclear deal with Iran. Sheldon Adelson Bets It All. The G.O.P. Created Donald Trump. Photo The betting markets now say that the most likely Republican nominee for president is a man who mocks women, insults Latinos, endorses war crimes like torture, denounces party icons and favors barring people from the United States based on their religion.

He’s less a true-believer conservative than an opportunist, though, for he has supported single-payer health insurance, abortion rights and tighter gun measures. Lindsey Graham says he’s “crazy,” Jeb Bush says he would be worse than President Obama, and the conservative National Review warned that he is a “menace to American conservatism.” Watch This Congressman Plagiarize A Lobbyist On Payday Loans. This Is Sheldon Adelson's Election. There are a few universal conversations at large political events: Who's sleeping less, transportation woes, etc. Sheldon Adelson Is Ready to Buy the Presidency. He just hasn’t decided which Republican candidate to back. Care to make a pitch? 3 Republican Attacks on the Constitution. The ludicrous myth of Republican fiscal responsibility: A history lesson for the modern GOP. Why’s GOP Only Science-Denying Party on Earth? On Tuesday, Jeb Bush proposed to eliminate the Obama administration’s regulation of carbon pollution, and, in keeping with his self-styled goal of “growth at all cost,” proposes to make any further climate regulation essentially impossible.

In any other democracy in the world, a Jeb Bush would be an isolated loon, operating outside the major parties, perhaps carrying on at conferences with fellow cranks, but having no prospects of seeing his vision carried out in government. But the United States is different. Here in America, ideas like Bush’s fit comfortably within one of the two major political parties. America's Gun Business, By the Numbers.

Before a gun can be used to hunt, for protection, or in a mass shooting like Wednesday's tragic killing in San Bernardino, California that left 14 victims dead and 17 wounded, it must be bought. Posted by Christian Drake on 03 Dec 2015 President George W. Bush is a serious embarrassment to America.