Jagmeet Singh shuts down heckler with 'love and courage' NDP leadership candidate Jagmeet Singh was interrupted during a meet-and-greet Wednesday by a visibly angry woman who clapped in his face and accused him of supporting “sharia law.” 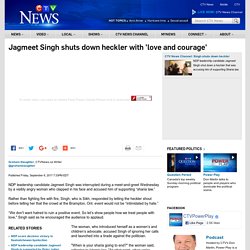 Theconversation. According to famed anthropologist Arjun Appadurai, the central question of our times is whether we’re witnessing the worldwide rejection of liberal democracy and its replacement by some sort of populist authoritarianism. 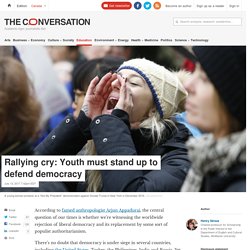 There’s no doubt that democracy is under siege in several countries, including the United States, Turkey, the Philippines, India and Russia. Yet what’s often overlooked in analyses of the state of global democracy is the importance of education. Education is necessary to respond to the formative and often poisonous cultures that have given rise to the right-wing populism that’s feeding authoritarian ideologies across the globe.

Under neo-liberal capitalism, education and the way that we teach our youth has become central to politics. Our current system has encouraged a culture of self-absorption, consumerism, privatization and commodification. Democracy demands questions. Single-payer healthcare for California is, in fact, very doable. The California Senate recently voted to pass a bill that would establish a single-payer healthcare system for the entire state. 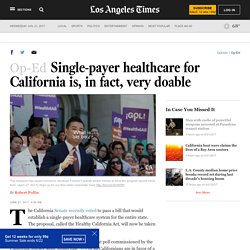 The proposal, called the Healthy California Act, will now be taken up by the state Assembly. The plan enjoys widespread support — a recent poll commissioned by the California Nurses Assn. found that 70% of all Californians are in favor of a single-payer plan — and with good reason. Under Healthy California, all residents would be entitled to decent healthcare without having to pay premiums, deductibles or copays. But as critics of the bill have pointed out, a crucial question remains: Is Healthy California economically viable? According to research I conducted with three colleagues at the University of Massachusetts, Amherst, the answer is yes. Why Conservative Evangelicals Like Trump - The Atlantic. GOP Health Bill Jeopardizes Out-of-Pocket Caps in Employer Plans - WSJ.

The Medicare-for-All Imperative: Beyond “Saving” the Affordable Care Act - Healthy California Campaign. How The Gospel of Prosperity Explains the American Health Care Act - The Atlantic. Stop me if you’ve heard this one. 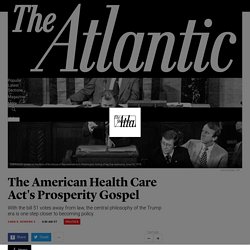 A Trump voter in Trump country—maybe a coal miner in West Virginia or the patron of a sleepy diner in rural Kentucky—is a recipient of Medicaid coverage under Obamacare for a life-threatening illness or chronic condition, but still maintains total support for President Trump and a zeal for repealing the program. Trump’s War on Dangerous Memory and Critical Thought. The ideal subject of totalitarian rule is not the convinced Nazi or the dedicated communist, but people for whom the distinction between fact and fiction, true and false, no longer exists. ― Hannah Arendt People living in the United States have entered into one of the most dangerous periods of the 21st century. 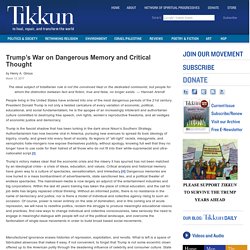 President Donald Trump is not only a twisted caricature of every variation of economic, political, educational, and social fundamentalism, he is the apogee of an increasingly intolerant and authoritarian culture committed to destroying free speech, civil rights, women’s reproductive freedoms, and all vestiges of economic justice and democracy. Why Republicans Can’t Come Up with an Obamacare Replacement. (Photo: AP/Tom Williams/CQ Roll Call) Representative Cathy McMorris Rodgers, Vice President-elect Mike Pence, Speaker Paul Ryan, House Majority Leader Kevin McCarthy, and Majority Whip Steve Scalise speak during a news conference after a meeting of the House Republican Conference on January 4, 2017, to discuss a strategy to repeal the Affordable Care Act. 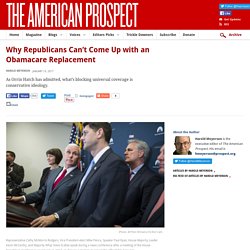 It took the United States three and two-thirds years to move from the standing start (to put it mildly) of Pearl Harbor to victory in World War II. Perhaps more germane, it took Franklin Roosevelt’s administration two years and three months from FDR’s first inauguration to conceive, refine, and enact its defining pieces of legislation, Social Security and the National Labor Relations Act—and just a few short weeks to enact federal insurance for depositors’ bank accounts. 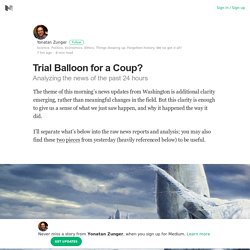 One is that the ban on Muslims will no longer be applied to green card holders. Notably absent from his statement was anything about people with other types of visa (including long-term ones), or anything about the DHS’ power to unilaterally revoke green cards in bulk. What Do We Tell The Children? Medicare as we know it in jeopardy if Trump supports Paul Ryan's reforms. House Speaker Paul Ryan's plan to phase out Medicare is nothing new. 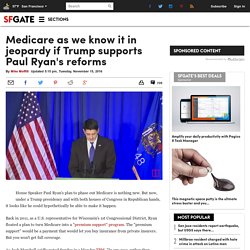 But now, under a Trump presidency and with both houses of Congress in Republican hands, it looks like he could hypothetically be able to make it happen. Back in 2011, as a U.S. representative for Wisconsin's 1st Congressional District, Ryan floated a plan to turn Medicare into a "premium support" program. The "premium support" would be a payment that would let you buy insurance from private insurers. But you won't get full coverage. Indivisible Guide. Why America should have more than 2 political parties.