Academics fact-check pervasive idea that liberal academics indoctrinate their students. Is an entire generation of voters “lost” to the Grand Old Party, and is academe at fault? 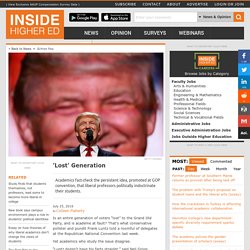 That’s what conservative pollster and pundit Frank Luntz told a roomful of delegates at the Republican National Convention last week. Yet academics who study the issue disagree. A realistic strategy for federal budget repair. A federal election is an opportunity to take stock of how Australia is doing, where it’s going, and what governments can do about it. 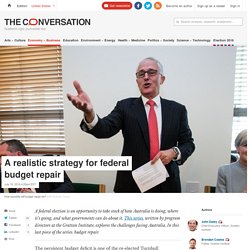 This series, written by program directors at the Grattan Institute, explores the challenges facing Australia. In this last piece of the series: budget repair. The persistent budget deficit is one of the re-elected Turnbull Government’s biggest challenges. But as revealed by the long list of zombie measures that the last government proposed and the Senate refused to pass, the politics of budget reform is never easy. Success will require tough decisions, and powerful public persuasion. If Hillary Clinton loses in November, it won't be Bernie Sanders' fault.

Democrats could lose the election this November: just watch Hillary Clinton being booed at her own party convention. 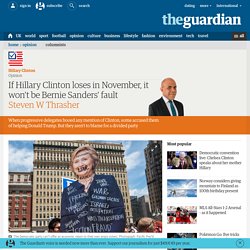 But, if that happens, it won’t be the fault of Sanders’ supporters. No – the blame will fall on the DNC. They could have played to the future of our country and the economic vision we desire. Instead, they gave us “super-predator” Clinton and milquetoast, pro-banking Tim Kaine. I had hoped Obama would deliver genuine economic change – but that didn’t happen.

How Rousseau Predicted Trump. “I love the poorly educated,” Donald Trump said during a victory speech in February, and he has repeatedly taken aim at America’s élites and their “false song of globalism.” 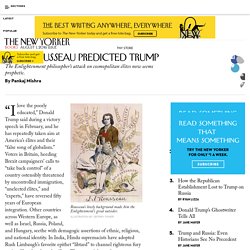 When big business influences social policy. Right up until that moment he becomes President, Donald Trump appears before us as a great American joke. 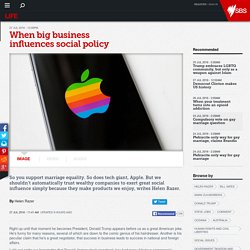 Forget cut-throat competition: to survive, try a little selflessness. How a Democrat Killed Welfare. Bill Clinton’s 1992 election was meant to be a turning point in American politics. 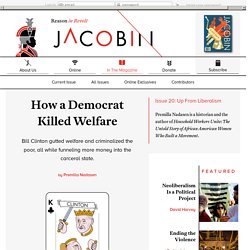 Liberals breathed a sigh of relief, believing him to be a much-needed break from the Reagan-Bush era of “small government” and social welfare cuts. But the optimism surrounding Clinton’s election — and favorable assessments of his time in office since — ignore the destruction his administration brought to poor and working people, especially African Americans, and mask not only the continuation but intensification of anti-poor policies.

Rather than offering a reprieve from punitive austerity, Clinton took the Reagan-Bush agenda a step further. If his administration was a turning point, it turned us in the wrong direction. In 1994, Clinton signed the Violent Crime Control and Law Enforcement Act, the largest crime bill in history, which allocated $10 billion for prison construction, expanded the death penalty, and eliminated federal funding for inmate education. Wage-theft. Epi. Millions of Americans struggle to get by on low wages, often without any benefits such as paid sick leave, a pension, or even health insurance. 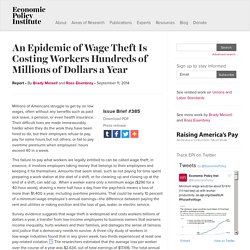 Their difficult lives are made immeasurably harder when they do the work they have been hired to do, but their employers refuse to pay, pay for some hours but not others, or fail to pay overtime premiums when employees’ hours exceed 40 in a week. This failure to pay what workers are legally entitled to can be called wage theft; in essence, it involves employers taking money that belongs to their employees and keeping it for themselves. What Is the Left? Our new issue, “Rank and File,” will be out August 8. 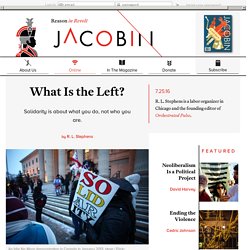 To celebrate its release, new subscriptions are discounted. I am Black. I capitalize Black and leave white lowercased. The Essential Struggle. Our next issue, “Between the Risings,” is out this month. 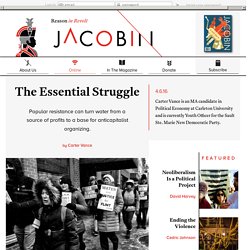 To celebrate its release, international subscriptions are $25 off. The state of Michigan is finally addressing Flint’s lead-tainted water crisis by funding bottled-water distribution in the community. But residents aren’t out of the woods yet; much of the water distributed was donated by companies like PepsiCo and Walmart, effectively making a large portion of Flint dependent on the largesse of some of the world’s biggest and most ethically pockmarked companies for an essential, life-sustaining good. This dynamic speaks volumes about how and why water has become a major site of contention both in the United States and globally. The Urban Green Wars. This article is part of a Jacobin symposium on Naomi Klein’s This Changes Everything. 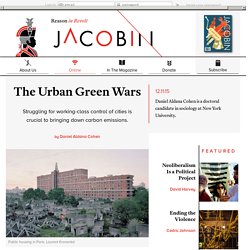 About half the planet’s carbon dioxide emissions originate in urban areas: the cities and suburbs where a growing majority of humanity lives. To survive this century, we’ll have to live together in new ways. Few issues are as fundamental to climate politics as this one. Who Should Fund Alt-Labor? Demonstrators outside of a Wendy’s fast food restaurant, April 4, 2013, in New York City. (AP Photo/Mary Altaffer) As the AFL-CIO holds meetings to mull its future, there’s increased talk inside and outside the federation about ways for workers to join the labor movement without winning collective bargaining.