A Game Designer’s Analysis Of QAnon. Q is a fictional character I’m afraid this needs to be said. Q is not a real person, but a fictional character. QAnon uses the oldest trope of all mystery fiction. The trolls are winning, says Russian troll hunter. Slaying online trolls can be a lonely business. Just ask Russia’s Lyudmila Savchuk, who first exposed the story of Russia’s disinformation campaign back in 2014. The journalist and 33-year-old mother of two, Savchuk started noticing websites and social media accounts attacking local opposition activists in her hometown of Saint Petersburg with a frequency she hadn’t seen before. The posts were all too similar. The verbal assaults too coordinated. So, when Savchuk later heard that an organization rumored to be behind the campaign — the Internet Research Agency or IRA — was hiring writers, she went for it. The Big Hack: How China Used a Tiny Chip to Infiltrate U.S. Companies. 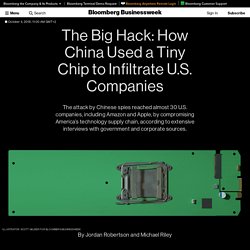 Based in Portland, Ore., Elemental made software for compressing massive video files and formatting them for different devices. Its technology had helped stream the Olympic Games online, communicate with the International Space Station, and funnel drone footage to the Central Intelligence Agency. Elemental’s national security contracts weren’t the main reason for the proposed acquisition, but they fit nicely with Amazon’s government businesses, such as the highly secure cloud that Amazon Web Services (AWS) was building for the CIA. To help with due diligence, AWS, which was overseeing the prospective acquisition, hired a third-party company to scrutinize Elemental’s security, according to one person familiar with the process. How the Hack Worked, According to U.S. ﻿The danger of left nationalism in the UK and Europe. What’s happened to Socialist Internationalism? 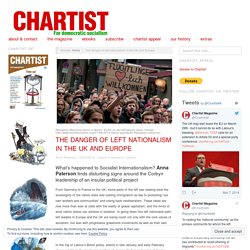 Anna Paterson finds disturbing signs around the Corbyn leadership of an insular political project From Germany to France to the UK, some parts of the left see clawing back the sovereignty of the nation state and curbing immigration as key to protecting “our own workers and communities” and rolling back neoliberalism. These ideas are now more than ever at odds with the reality of global capitalism, and the limits of what nation states can achieve in isolation.

20 reasons you should vote to leave the European Union  Rationalist destroys Leavers with list of all EU laws that have been forced on us against our will. Is the British establishment finally finished? In his 2014 book The Establishment, Owen Jones explained how and why Britain’s unequal, class-ridden system would always prevail. 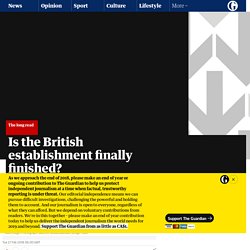 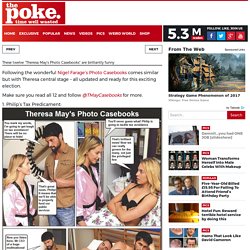 Make sure you read all 12 and follow @TMayCasebooks for more. Today's FAZ report on May's disastrous dinner with Juncker - briefed by senior Commission sources - is absolutely damning. : Scotland. British army creates team of Facebook warriors. The British army is creating a special force of Facebook warriors, skilled in psychological operations and use of social media to engage in unconventional warfare in the information age. 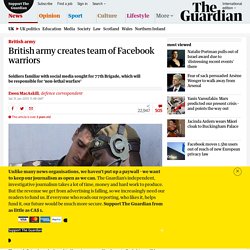 The 77th Brigade, to be based in Hermitage, near Newbury, in Berkshire, will be about 1,500-strong and formed of units drawn from across the army. It will formally come into being in April. The brigade will be responsible for what is described as non-lethal warfare. Both the Israeli and US army already engage heavily in psychological operations. Against a background of 24-hour news, smartphones and social media, such as Facebook and Twitter, the force will attempt to control the narrative. Revealed: US spy operation that manipulates social media. The US military is developing software that will let it secretly manipulate social media sites by using fake online personas to influence internet conversations and spread pro-American propaganda. 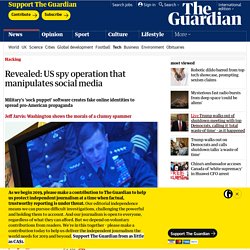 A Californian corporation has been awarded a contract with United States Central Command (Centcom), which oversees US armed operations in the Middle East and Central Asia, to develop what is described as an "online persona management service" that will allow one US serviceman or woman to control up to 10 separate identities based all over the world. Hypocrisy of the west over fake news claim. The defence secretary, Michael Fallon, appears ignorant of well-established UK and US military programmes designed to modify public perceptions in conflict zones (Nato must counter Russia’s ‘weaponising’ of lies – Fallon, 3 February). 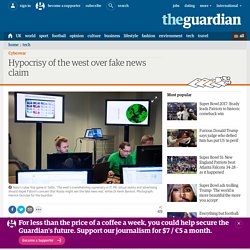 A prototype system was first reported in detail by Nick Fielding and Ian Cobain in the Guardian nearly six years ago – just as Nato began air attacks on Libya (Revealed: US spy operation that manipulates social media, 18 March 2011). I quote: “… it will allow the US military to create a false consensus in online conversations, crowd out unwelcome opinions and smother commentaries or reports that do not correspond with its own objectives … each fake online persona must have a convincing background, history and supporting details … up to 50 US-based controllers should be able to operate false identities from their workstations without fear of being discovered by sophisticated adversaries” 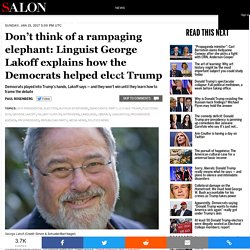 He was a founding father of cognitive linguistics, starting with his 1980 book, “Metaphors We Live By“ (co-authored with philosopher Mark Johnson). The book showed how immediate, concrete experience — bodily orientation, physical movement, and so on — structures our understanding of more complex and abstract experiences via “conceptual metaphors” such as “Consciousness Is Up,” “Love Is a Journey,” etc. What Gamergate should have taught us about the 'alt-right' It’s understandable that the world didn’t much care about Gamergate. 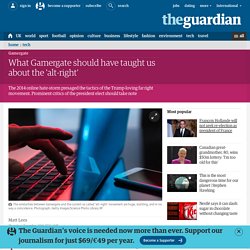 The 2014 hashtag campaign, ostensibly founded to protest about perceived ethical failures in games journalism, clearly thrived on hate – even though many of those who aligned themselves with the movement either denied there was a problem with harassment, or wrote it off as an unfortunate side effect. Sure, women, minorities and progressive voices within the industry were suddenly living in fear. The dark rigidity of fundamentalist rural America: a view from the inside. #Brexit, the populist surge and the crisis of complexity. The British vote in favour of an exit from the EU has thrown the UK’s political system into chaos and shocked Europe and the world. 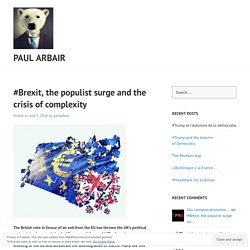 The long-term consequences of this vote are still unclear, but some fear it could trigger the undoing of the UK and accelerate the disintegration of the EU. Many see this outcome as a new victory for populist movements, which are on the rise across much of the Western world. Something more fundamental, however, might be at play. A tale of two disunions The British citizens’ vote in favour of an exit from the European Union has thrown the United Kingdom into an unprecedented crisis and sent shockwaves across Europe and the world. Prime Minister David Cameron, who seemed to have won a convincing re-election just over a year ago, stepped down and announced that he would leave it to his or her successor to deal with the fallout of the referendum result.

The UK’s political system – in fact, the UK itself – now appears to be at risk of imploding. Farewell, America - BillMoyers.com. The sun sets behind the Jefferson Memorial in Washington. (Photo By Bill Clark/CQ Roll Call) Log In. Photo Donald Trump schlepped across town on Tuesday to meet with the publisher of The New York Times and some editors, columnists and reporters at the paper. As The Times reported, Trump actually seemed to soften some of his positions: He seemed to indicate that he wouldn’t seek to prosecute Hillary Clinton.

But he should never have said that he was going to do that in the first place. The reply A C Grayling got when he wrote to Parliament (and how he reacted) - Articles - The New European. 17:20 23 November 2016 A C Grayling. For the ‘new yellow journalists,’ opportunity comes in clicks and bucks. AC Grayling on why now is the time for MPs to derail a disastrous Brexit deal - Articles - The New European. 18:32 16 November 2016. Brexit Voters: NOT the Left Behind. I’m a Coastal Elite From the Midwest: The Real Bubble is Rural America. Don't Panic. On “Woke” White People Advertising their Shock that Racism just won a Presidency. Farewell, America - BillMoyers.com. The Cinemax Theory of Racism.