Rules Of The Internet 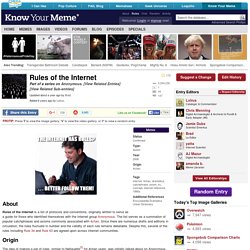 The list serves as a summation of popular catchphrases and axioms commonly associated with 4chan. Since there are numerous drafts and editions in circulation, the rules fluctuate in number and the validity of each rule remains debatable. Despite this, several of the rules including Rule 34 and Rule 63 are agreed upon across internet communities. Origin The idea of making a set of rules, similar to Netiquette for 4chan users, was initially talked about on Anonymous-related IRC channels before an entry was submitted to Encyclopedia Dramatica sometime in late 2006 and archived on January 10th, 2007. 1) Do not talk about rules 2-33 34) There is porn of it. Spread A set of 50 rules were posted on the text based 4chan discussion board on February 15th, 2007. Notable Rules Rule 1 & 2 Rule 1. Rules 3, 4 and 5 Rule 3. 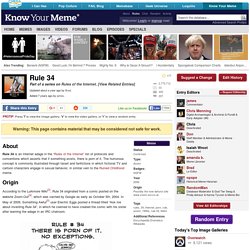 The humorous concept is commonly illustrated through fanart and fanfictions in which fictional TV and cartoon characters engage in sexual behavior, in similar vein to the Ruined Childhood meme. Origin According to the Lurkmore Wiki, Rule 34 originated from a comic posted on the website Zoom-Out, which was cached by Google as early as October 5th, 2004. In May of 2009, Something Awful user Electric Eggs posted a thread titled “Ask me about inventing Rule 34”, in which he claimed to have created the comic with his sister after learning the adage in an IRC chatroom. Spread On March 30th, 2006, the first Urban Dictionary definition for “Rule 34” was submitted by user Nukeitall, who claimed the adage was commonly used on a variety of message boards. Rule 34: There is porn of it, no exceptions.

Notable Examples. Rule 63. About Rule 63 is an internet adage which states that for every fictional character, there exists an opposite-gender counterpart. 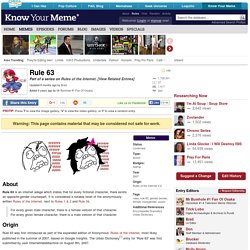 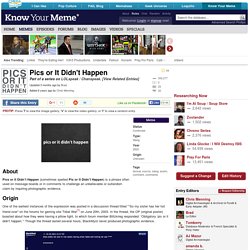 Origin One of the earliest instances of the expression was posted in a discussion thread titled "“So my sister has her hot friend over” on the forums for gaming site Tribal War on June 20th, 2003. In the thread, the OP (original poster) boasted about how they were having a pillow fight, to which forum member Blitzkrieg responded: “Obligatory ‘pix or it didn’t happen.’”

Though the thread lasted several hours, BlackMyst never produced photographic evidence. Spread Later in 2003, the phrase was used again on the Tribal War forums in response to the OP’s claim that he could flex his scrotum and move his gonads at will. There Are No Girls on the Internet. About “There are No Girls on the Internet” is a tongue-in-cheek adage which implies that there are no female entities actually participating in online activities, especially when it comes to anonymous exchanges in chatrooms and discussion forums. 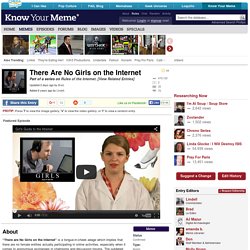 The outdated myth also jests that the Internet is essentially a “sausage fest” dominated and defined by male internet users and a smaller population of male trolls or griefers who pose as women in pursuit of lulz. The catchphrase also describes how any female privilige (percieved as social benefits got from the sex) on the Internet is stripped away. Origin The origin of the myth can be traced back to the male-prevalent days of Usenet, particularly in the virtual Multi-User Dungeons (MUDs), a genre of text-based online role-playing games and predecessor to MMORPG like World of Warcraft. “Many people, both male and female, enjoy the attention paid to female characters. Spread TITS or GTFO.

Tits or GTFO. Wheaton's Law. About Wheaton’s Law is an internet axiom which states “Don’t be a dick.” 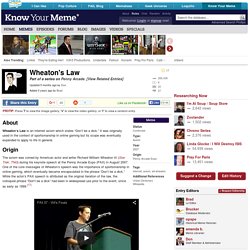 It was originally used in the context of sportsmanship in online gaming but its scope was eventually expanded to apply to life in general. Origin The axiom was coined by American actor and writer Richard William Wheaton III (Star Trek: TNG) during his keynote speech at the Penny Arcade Expo (PAX) in August 2007. One of the core messages of Wheaton’s speech was the importance of sportsmanship in online gaming, which eventually became encapsulated in the phrase “Don’t be a dick.” The keynote speech and his proposition were met by positive reception from the audience and the webcast viewers at home, as well as significant coverage from a number of well-known geek culture blogs like Ars Technica, 1UP, and Joystiq. One of the core messages of my speech was “don’t be a dick” when you play games online, and a lot of people told me how glad they were to hear that.