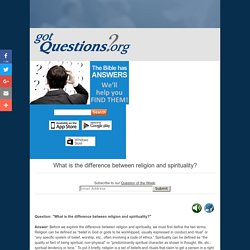 " Answer: Before we explore the difference between religion and spirituality, we must first define the two terms. “Religion is Just a Bunch of Rules.” What is the Christian religion all about? 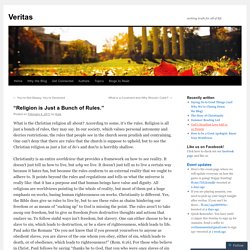 According to some, it’s the rules. Religion is all just a bunch of rules, they may say. In our society, which values personal autonomy and decries restrictions, the rules that people see in the church seem prudish and contraining. One can’t deny that there are rules that the church is suppose to uphold, but to see the Christian religion as just a list of do’s and don’ts is horribly shallow.

Christianity is an entire worldview that provides a framework on how to see reality. Most importantly, Christianity based on the Bible ultimately points to a personal God who desires to free us from slavery and enter into a relationship with us. Does following Jesus Christ rather than a set of rules make Christianity any less a 'religion of the book' than other religions that have a book? - Quora. 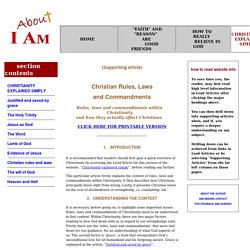 It is recommended that readers should first gain a quick overview of Christianity by accessing the Lead Article for this section of the website, “Christianity explained simply”, before reading any further. This particular article firstly explains the context of rules, laws and commandments within Christianity. It then describes how Christians principally know right from wrong. Lastly, it presents Christian views on the cost of disobedience or wrongdoing, i.e. committing ‘sin’. It is necessary, before going on, to highlight some important issues. Christianity is NOT Religion. Christianity is NOT Religion The Latin word from which the English word "religion" is derived means "to bind up. 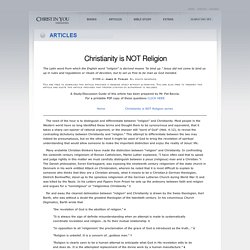 " Jesus did not come to bind us up in rules and regulations or rituals of devotion, but to set us free to be man as God inended. ©1998 by James A. Fowler. All rights reserved. The commandments - Taizé. Why does Jesus call the commandment to love one another a “new” commandment? 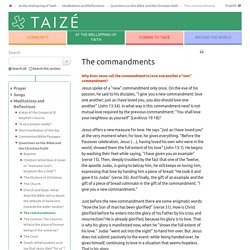 Religious Freedom and Christianity: An Overview. Religious freedom as currently understood is the condition in which individuals or groups are permitted without restriction to assent to and, within limits, to express and act upon religious conviction and identity in civil and political life free of coercive interference or penalties imposed by outsiders, including the state. 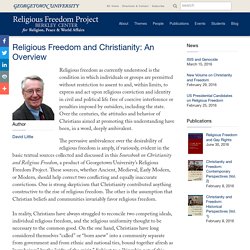 Over the centuries, the attitudes and behavior of Christians aimed at promoting this understanding have been, in a word, deeply ambivalent. The pervasive ambivalence over the desirability of religious freedom is amply, if variously, evident in the basic textual sources collected and discussed in this Sourcebook on Christianity and Religious Freedom, a product of Georgetown University’s Religious Freedom Project. These sources, whether Ancient, Medieval, Early Modern, or Modern, should help correct two conflicting and equally inaccurate convictions. 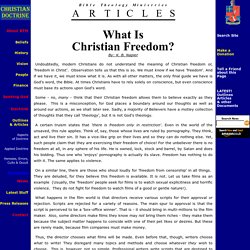 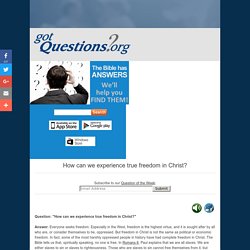 " Answer: Everyone seeks freedom. Especially in the West, freedom is the highest virtue, and it is sought after by all who are, or consider themselves to be, oppressed. But freedom in Christ is not the same as political or economic freedom. In fact, some of the most harshly oppressed people in history have had complete freedom in Christ. The Bible tells us that, spiritually speaking, no one is free. Although it seems like a contradiction, the only true freedom in Christ comes to those who are His slaves. Jesus gives us freedom through his scarfice, how do we get freedom from ourselves?

Jesus gives us freedom through his scarfice, how do we get freedom from ourselves? 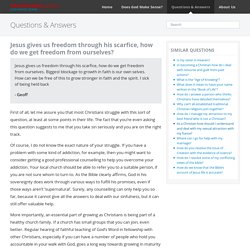 First of all, let me assure you that most Christians struggle with this sort of question, at least at some points in their life. The fact that you’re even asking this question suggests to me that you take sin seriously and you are on the right track. Of course, I do not know the exact nature of your struggle. If you have a problem with some kind of addiction, for example, then you might want to consider getting a good professional counselling to help you overcome your addiction.

Your local church should be able to refer you to a suitable person, if you are not sure whom to turn to. On the Freedom of a Christian. On the Freedom of a Christian, sometimes also called "A Treatise on Christian Liberty" (German: "Von der Freiheit eines Christenmenschen") (November 1520), was the third of Martin Luther’s major reforming treatises of 1520, appearing after his Address to the Christian Nobility of the German Nation (August 1520) and the work Prelude on the Babylonian Captivity of the Church (October 1520). 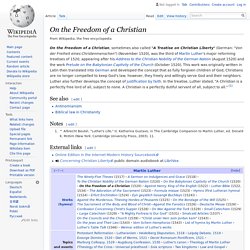 This work was originally written in Latin then translated into German and developed the concept that as fully forgiven children of God, Christians are no longer compelled to keep God's law; however, they freely and willingly serve God and their neighbors. Luther also further develops the concept of justification by faith. In the treatise, Luther stated, "A Christian is a perfectly free lord of all, subject to none. How Are We Free? Question of the Month The following answers to this central philosophical question each win a random book. To be completely free, or to do something of your own free will, it is essential that you could have acted otherwise. If you cannot avoid acting in a particular way, then your action is not free. While it is generally understood that human beings have the ability to think and act freely as rational and moral agents, the common causal laws by which all human activities and responses are governed are incontestable.

It is this conflict that provides the real problem of how we are free. It is hard to refute determinism in a world where almost all scientific disciplines depend on physical cause and effect. Existentialism. I. Absolute Individuality and Absolute Freedom. The Existentialist conceptions of freedom and value arise from their view of the individual. Since we are all ultimately alone, isolated islands of subjectivity in an objective world, we have absolute freedom over our internal nature, and the source of our value can only be internal. II. The Existentialist View of Human Nature. Existentialism is defined by the slogan Existence precedes Essence. 1. 2. 3. 4. The Existentialist View (We create our own nature.): We are thrown into existence first without a predetermined nature and only later do we construct our nature or essence through our actions.

Freedom in Christ - What is it? How can I experience true freedom in Christ? Subscribe to our Compelling Mail Newsletter: Freedom is a basic human desire, so we would expect to read about it in the Bible. Religion is Slavery, Christianity is Freedom. Religion Is Slavery,Christianity Is Freedom by Ernest L. Martin, Ph.D., 1980Edited by David Sielaff, September 2003 Read the accompanying Newsletter for September 2003 The style of this Exposition is different from others produced by FBR. 1It is primarily a transcript of the most popular lecture we have offered [during the days of FBR].

Some pertinent material has been added to the subject which we think will show in clear language what basic Christianity really is. Religion has been one of the greatest curses ever to afflict mankind. Religion has long been the cause of hatred and animosity between peoples. Jesus Is Not Your Sin-Manager. What comes to mind when you think of the word “financial debt?” College loans? Low-budget TV commercials? Interminable stress and prolonged discouragement? These are all possible, and understandable, responses. Here’s another one: Jesus Christ.

Jesus Came to Crush Our Debt. Christian Freedom May Not Mean What You’ve Been Told. Thank you for your interest in Patheos newsletters! Please enter your email address below and click the "Subscribe" button. Thank you for your subscription. You can visit your Preference Center to complete your profile and see what else we have to offer. We apologize, we were unable to complete your subscription at this time, please try again later. If this error persists please contact us at communications@patheos.com. How Are We Free? The commandments - Taizé. What is the difference between religion and spirituality?