US Gov and Politics 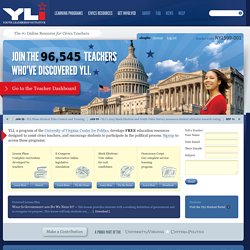 Go to the Teacher Dashboard YLI, a program of the University of Virginia Center for Politics, develops FREE education resources designed to assist civics teachers, and encourage students to participate in the political process. Signup to access these programs: Lesson Plans Complete curriculum developed by teachers. Constitutional Rights Foundation. C-SPAN Classroom. We the People. PBS Election. AP Central Classroom Resources. Choices.edu: History and Current Issues. National Issues Forums. National Issues Forums on PBS. Use one of the services below to sign in to PBS: You've just tried to add this video to your Watchlist so you can watch it later. 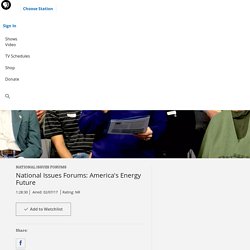 But first, we need you to sign-in to PBS using one of the services below. Lesson Plans for Learning Civics. Vote Smart: Civics Matters Curriculum. Annenberg Classroom. Student Governmental Affairs Program. Edutopia Elections: Digital Resources for Educators. This election has been unlike any in modern history. 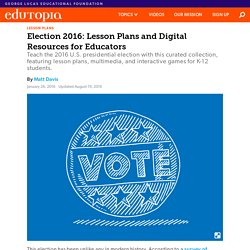 According to a survey of educators by Teaching Tolerance, the campaign’s contentious tone has spilled over into classrooms. Presidential elections are exciting for students and provide an opportunity to discuss and debate a range of issues in the classroom. But this year, that excitement is more likely to turn into conflict. University of Wisc: Center for the Study of the American Constitution LPs. We have provided some suggestions on how to use various parts of our website. 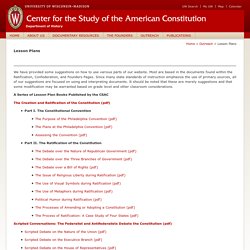 Most are based in the documents found within the Ratification, Confederation, and Founders Pages. Since many state standards of instruction emphasize the use of primary sources, all of our suggestions are focused on using and interpreting documents. It should be noted that these are merely suggestions and that some modification may be warranted based on grade level and other classroom considerations. 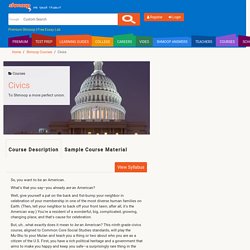 (Source) We wish we could tell you the best way to handle your money, but there are as many theories about it as there are Land Before Time movies. Stick it under your mattress in a tin can. Well, Adam Smith claimed to know exactly what was best for the economy of a nation, way back in 1776. Smith thought this tactic was counterproductive to a healthy economy, and Americans could not have agreed more.

Would it surprise you to learn that Adam Smith's ideas still have an impact on the way Americans think about the relationship between the government and the economy? Strata Academics – Gov Curriculum. Civic Action Project. Certell Gov and Econ Curriculums. Pen Pal Schools - American Perspectives. ABC News Politics Videos and Stories. The Lowdown. ProCon.org - Pros and Cons of Controversial Issues. Inquiries Archive - C3 Teachers. 2017 in graphics, charts and data visualizations - Washington Post.

CourseRedesignContentOutline. Infographics. How do people get health care in US? 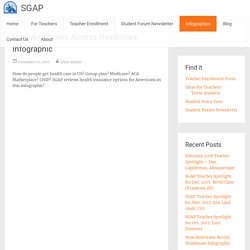 RealClearPolitics - Opinion, News, Analysis, Video and Polls. Cartoons. AP®︎ US Government and Politics. Home. Munk Debates - Home. Mountvernon. Using controversy as a teaching tool: An interview with Diana Hess  - kappanonline.org. Teaching students how to engage in civil discussions about important issues is even more essential in an environment as polarized and politicized as America is today. 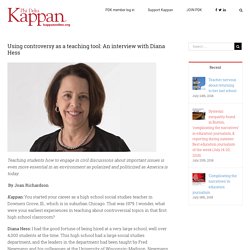 By Joan Richardson Kappan: You started your career as a high school social studies teacher in Downers Grove, Ill., which is in suburban Chicago. That was 1979. I wonder, what were your earliest experiences in teaching about controversial topics in that first high school classroom? Diana Hess: I had the good fortune of being hired at a very large school, well over 4,000 students at the time. So when I came into that school in 1979, the core courses were based on that approach. It’s one reason why I wanted to come to the University of Wisconsin-Madison. Kappan: What did they teach you about how to approach controversial topics in the classroom? Hess: One of the things I learned is that there were highly specific frameworks for how to do this. Define your terms. The Trump Effect. C-SPAN - AP GoPo Content Outline & Featured Resources.

Talking Across Divides: 10 Ways to Encourage Civil Classroom Conversation On Difficult Issues. In December, we wrote about the nearly 3,000 comments we received on the issues of immigration, guns, climate and energy, and race, gender and identity, as well as on many other topics suggested by students themselves in our open forum. 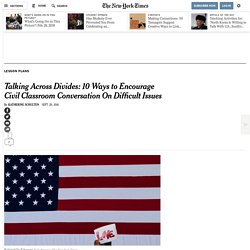 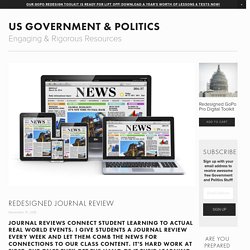 I give students a journal review every week and let them comb the news for connections to our class content. It's hard work at first, but once they get the hang of it their learning becomes powerfully authentic and their media literacy shoots through the roof. One of the best compliments I get every year are all articles that my graduates send me to share with my current crop of students.

AP American Government and Politics with Study Edge. The links to the Study Edge AP® U.S. 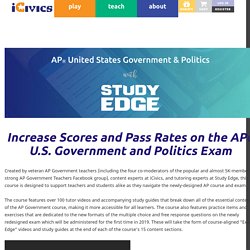