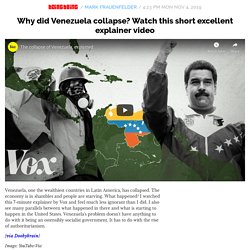 The economy is in shambles and people are starving. What happened? I watched this 7-minute explainer by Vox and feel much less ignorant than I did. I also see many parallels between what happened in there and what is starting to happen in the United States. Venezuela's problem doesn't have anything to do with it being an ostensibly socialist government. The Waiver. The Ozone Layer Was Doomed Until a Handful of Scientists Stood Up to Power. Uk.businessinsider. Log In. The refugee who took on the British government. One day in late 2010, a farmer – I will call him Opik – woke up in his village in the remote Ethiopian province of Gambella. 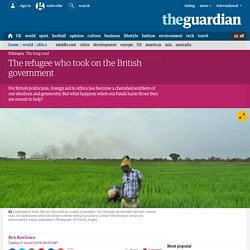 In this lush lowland area of savanna bordering South Sudan, the semi-nomadic Anuak people have lived for centuries, cultivating sorghum and maize, swimming in the river and gathering nuts, berries and fruits from the trees and wild honey from the forest. “It was paradise,” Opik recalled. The Anuak have an intimate relationship with their landscape. Their highest traditional authority is a spiritual leader called the wat-ngomi, who must sanction any human intervention in nature. Some trees are deemed sacred and cannot be cut down. Obama's Policy Legacy: The Nation He Built. On March 23, 2010, President Barack Obama signed the Patient Protection and Affordable Care Act, the 906-page health care reform law known as Obamacare. 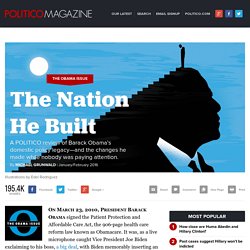 It was, as a live microphone caught Vice President Joe Biden exclaiming to his boss, a big deal, with Biden memorably inserting an extra word for emphasis—and for history—between “big” and “deal.” Obamacare would cover millions of the uninsured, a giant step toward the Democratic dream of health care for all. It also included dozens of less prominent provisions to rein in the soaring cost and transform the dysfunctional delivery of American medicine. It was the kind of BFD that the most consequential presidencies are made of, even though it had squeaked through Congress without any Republican votes, and few Americans truly understood what was in it. Story Continued Below Even fewer Americans understood what was in the Health Care and Education Reconciliation Act, the 55-page addendum that officially finalized Obamacare.

Yes, education. The Cracks in Britain's Big Plan to Build 30,000 Affordable Homes. The U.K. government is so tired of waiting on private developers to build new homes that it’s going to build its own. 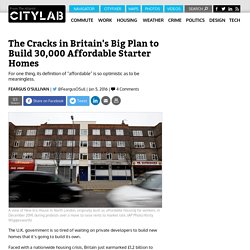 Faced with a nationwide housing crisis, Britain just earmarked £1.2 billion to directly commission 30,000 affordable new homes on brownfield sites by 2020, part of a target of 200,000 new homes in total. To speed things up, the first five new projects will be built on government land—ex-military sites, a goods yard, and a former hospital—in Southeast England. Given that someone on median salary (£26,500, or $39,000) cannot afford to buy a property in 91 percent of the country, the plan should ease the U.K.’s desperate affordable housing drought at least a little. But just how much relief it will provide is a tricky question. On closer look, the plan seems somewhat less promising, partly because its use of the term “affordable” is so optimistic as to be meaningless. British lawmakers will soon debate whether to ban Donald Trump from the U.K. Front pages of British newspapers on Dec. 9, which were published after Republican presidential candidate Donald Trump said that the Metropolitan Police are scared to patrol certain Muslim areas of London. 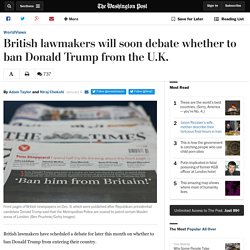 (Ben Pruchnie/Getty Images) British lawmakers have scheduled a debate for later this month on whether to ban Donald Trump from entering their country. These 5 Facts Explain the Worsening Saudi-Iran Rivalry. Saudi-Iran relations have spiraled downwards following Saudi Arabia’s execution of Nimr al-Nimr, a prominent Shia cleric and activist. 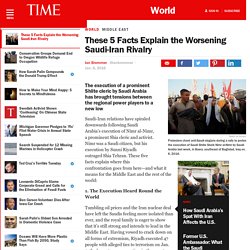 Nimr was a Saudi citizen, but his execution by Sunni Riyadh outraged Shia Tehran. From ISIS to Russia: How War Changed in 2015. From China in Asia to Russia in Europe and the Middle East, and ISIS just about everywhere, 2015 has seen the flourishing of conflicts that exist in a gray zone, one which is not quite open war but more than regular competition, which is attuned to globalization, which liberal democracies are ill-equipped to deal with, and which may well be the way power is exercised and conflict conducted in the foreseeable future. 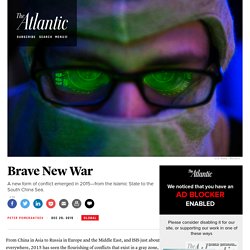 Described by scholars as “hybrid,” “full-spectrum,” “non-linear,” “next-generation,” or “ambiguous”—the variations in the description indicate the slipperiness of the subject—these conflicts mix psychological, media, economic, cyber, and military operations without requiring a declaration of war. China’s doctrine of the Three Warfares pushes these non-physical aspects even further, using “legal,” “psychological,” and “media” warfare to, in the words of the analyst Laura Jackson, who directed a Cambridge University and U.S.