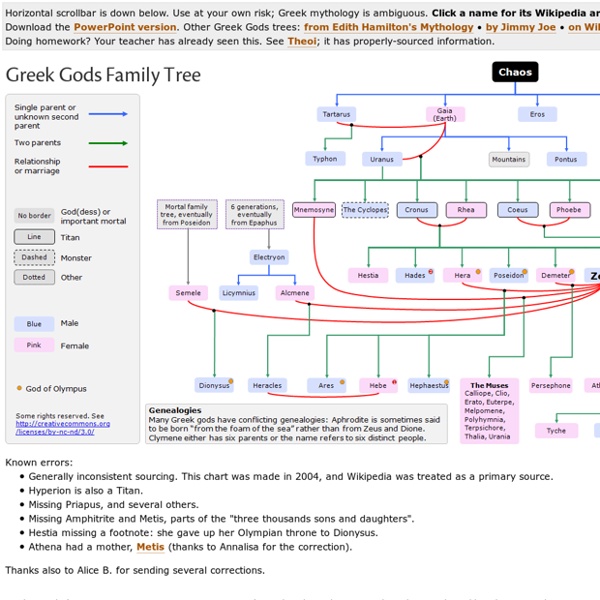 Sumerian cuneiform script and Sumerian language Sumerian was spoken in Sumer in southern Mesopotamia (part of modern Iraq) from perhaps the 4th millennium BC until about 2,000 BC, when it was replaced by Akkadian as a spoken language, though continued to be used in writing for religious, artistic and scholarly purposes until about the 1st century AD. Sumerian is not related to any other known language so is classified as a language isolate. Sumerian cuneiform Sumerian cuneiform is the earliest known writing system. Its origins can be traced back to about 8,000 BC and it developed from the pictographs and other symbols used to represent trade goods and livestock on clay tablets. Originally the Sumerians made small tokens out of clay to represent the items.

Mythical Chronology of Greece This Mythical Chronology of Greece depicts the traditional chronology established for the events of ancient Greek mythology by ancient chronographers and mythographers. This list largely reflects the work of Saint Jerome, whose work in turn was based primarily on the analysis of Apollodorus, Diodorus Siculus, and Eusebius. [1] In a few cases, the chronology also reflects the opinions of more recent scholars, who have cross referenced the mythology to archeological discoveries. These interpolations are noted with italics.

Five Documentaries You NEED To Watch On Netflix As Of 11/13/13 Documentaries offer you something very few fictional films can. You walk away from them smarter than you were when you showed up. That is how documentaries work. They often find a single subject, and focus their energy on informing those who don’t seem to know enough about it.

World’s longest underwater ‘crystal’ cave in deep Russian waters revea... - StumbleUpon Russian divers working on Orda Cave Awareness Project have revealed a set of unseen pictures of the world’s longest underwater cave. Located near Orda village in Perm region, Ural, Orda Cave is also the biggest underwater gypsum crystal cave in the world and second in Eurasia in terms of volumes of its galleries that stretch up to five kilometers. Famous underwater photographer, journalist and dive-instructor Victor Lyagushkin led the team of cave divers and took stunning images of the cave at less than zero degree temperature. “There is extremely low water temperature, about 3C and 20C below zero on surface.

The Magical Herbalist’s Mini Guide to Popular Herbs, Plants, Fruits, Flowers & Their Magical Properties… The herbs listed below that are marked with a * next to it, should never be consumed without the correct & legal amount made & distributed by that of a qualified herbalist. They are extremely dangerous herbs, especially when used incorrectly… Let us start the list of most popular herbs alphabetically: Absinthium *A healing herb that promotes good health, vigour & an active agent to fight off disease. Acorn *Promotes good luck, encourages fertility, spiritual growth & prosperity. Acacia *Promotes success, monetary gain, lasting love & helps develop your psychic powers.

Tiny Wind & Solar Powered Home Lets You Live Off The Grid Anywhere In The World Ecocapsules, designed by Bratislava-based Nice Architects, promise to let anyone live off the grid for up to a year. Each unit is equipped with solar panels, a retractable wind-turbine, and a design that captures rain water. Inside, you’ll find a kitchenette with running water, a flushing toilet, and hot shower. The Ecocapsule “is suitable for a wide range of applications,” write the designers, such as an “independent research station or a tourist lodge to an emergency housing or a humanitarian-action unit.”

The Battle with the Titans - Classical Mythology With his rescued siblings, Zeus had the beginnings of an army with which to challenge Cronus. However, Cronus had some difficulty in assembling his own forces. Some of the Titans refused to help him in the struggle. None of the Titanesses participated, and Oceanus, Cronus's brother, also refused to fight. month: "2008-10" Joker in a Dress The Halloween store clerk looked surprised when I asked for a non-slutty nurse costume. tags: halloween surprise costume nurse [add] 2008-10-30 22:14:28 / Rating: 650.25 / Video: Divers find large, unexplained object at bottom of Baltic Sea A team of salvage divers has discovered an unexplained object resting at the bottom of the Baltic Sea near Sweden. "This thing turned up. My first reaction was to tell the guys that we have a UFO here on the bottom," said Peter Lindberg, the leader of the amateur treasure hunters. Sonar readings show that the mysterious object is about 60 meters across, or, about the size of a jumbo jet.

Casting a Circle The Purposes of a Circle A sacred circle has several purposes, the most significant of which is to define an area where formal ritual work can be performed. A circle is a place in which the rules and conditions are different to that of the everyday world. A circle is not a barrier, but a doorway to another world. To contain any magickal energy raised and to prevent its dissipation until it has been used up is another purpose of the circle. How Whole Turmeric Heals The Damaged Brain Long considered impossible to accomplish, new research reveals how a simple spice might contribute to the regeneration of the damaged brain. Turmeric is hands down one of the, if not the, most versatile healing spice in the world with over 600 experimentally confirmed health benefits, and an ancient history filled with deep reverence for its seemingly compassionate power to alleviate human suffering. But, most of the focus over the past decade has been centered on only one of its many hundreds of phytocompounds: namely, the primary polyphenol in turmeric known as curcumin which gives the spice its richly golden hue. This curcumin-centric focus has lead to the development of some very good products, such as phospholipid bound curcumin concentrate (e.g. Meriva, BCM-95) which greatly helps to increase the absorption and bio-activity of curcumin.