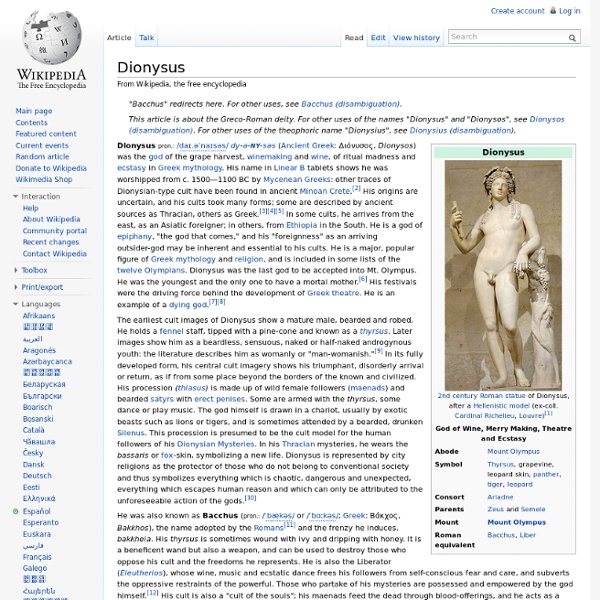 The earliest cult images of Dionysus show a mature male, bearded and robed. He holds a fennel staff, tipped with a pine-cone and known as a thyrsus. Later images show him as a beardless, sensuous, naked or half-naked androgynous youth: the literature describes him as womanly or "man-womanish".[10] In its fully developed form, his central cult imagery shows his triumphant, disorderly arrival or return, as if from some place beyond the borders of the known and civilized. His procession (thiasus) is made up of wild female followers (maenads) and bearded satyrs with erect penises. Some are armed with the thyrsus, some dance or play music. He was also known as Bacchus (/ˈbækəs/ or /ˈbɑːkəs/; Greek: Βάκχος, Bakkhos), the name adopted by the Romans[12] and the frenzy he induces, bakkheia. Names Etymology The dio- element has been associated since antiquity with Zeus (genitive Dios). Epithets Dionysus was variably known with the following epithets: Acroreites at Sicyon.[24] Mythology

DEMETER In ancient Greek religion and myth, Demeter (/diˈmiːtər/; Attic: Δημήτηρ Dēmḗtēr; Doric: Δαμάτηρ Dāmā́tēr) is the goddess of the harvest, who presided over grains and the fertility of the earth. Her cult titles include Sito (Σιτώ), "she of the Grain",[1] as the giver of food or grain[2] and Thesmophoros (θεσμός, thesmos: divine order, unwritten law; "phoros": bringer, bearer), "Law-Bringer," as a mark of the civilized existence of agricultural society.[3] Etymology[edit] Demeter's character as mother-goddess is identified in the second element of her name meter (μήτηρ) derived from Proto-Indo-European *méh₂tēr (mother).[11] In antiquity, different explanations were already proffered for the first element of her name. An alternative, Proto-Indo-European etymology comes through Potnia and Despoina; where Des- represents a derivative of PIE *dem (house, dome), and Demeter is "mother of the house" (from PIE *dems-méh₂tēr).[20] Agricultural deity[edit] Festivals and cults[edit] Myths[edit]

The Film Sufi: "About Elly" - Asghar Farhadi (2009) When middle-class Iranians in Tehran have a holiday, they often like to escape their dry urban confines and trek up north to the Caspian seaside, where everything is cooler and greener. It’s also an opportunity for people to be a little more casual and relaxed in the open air. About Elly (Darbareye Elly, 2009) is a deceptively clever film about one such holiday visit, where events don’t go exactly as planned. Over the course of the three-day weekend by the sea, the viewer is exposed to the fascinatingly complex social dynamics of people under stress. In particular, this film has things to say about some of the nuances of Iranian culture under these circumstances (but, of course, much of what happens relates generally to how all of us interact with others). The film was written and directed by Asghar Farhadi, whose subsequent production was the more famous and highly praised A Separation (2011), which won the US Oscar for Best Foreign Film. Now the finger-pointing begins. Notes:

ATHENA In Greek religion and mythology, Athena or Athene (/əˈθiːnə/ or /əˈθiːniː/; Attic: Ἀθηνᾶ, Athēnā or Ἀθηναία, Athēnaia; Epic: Ἀθηναίη, Athēnaiē; Ionic: Ἀθήνη, Athēnē; Doric: Ἀθάνα, Athānā), also referred to as Pallas Athena/Athene (/ˈpæləs/; Παλλὰς Ἀθηνᾶ; Παλλὰς Ἀθήνη), is the goddess of wisdom, courage, inspiration, civilization, law and justice, just warfare, mathematics, strength, strategy, the arts, crafts, and skill. Minerva is the Roman goddess identified with Athena.[3] Athena is portrayed as a shrewd companion of heroes and is the patron goddess of heroic endeavour. She is the virgin patroness of Athens. Athena's veneration as the patron of Athens seems to have existed from the earliest times, and was so persistent that archaic myths about her were recast to adapt to cultural changes. Origin traditions[edit] Patroness[edit] Mythology[edit] Birth[edit] Olympian version[edit] Plato, in Cratylus (407B) gave the etymology of her name as signifying "the mind of god", theou noesis.

(2) Chinese Room Menu, Menu for Chinese Room, Kothrud Pune Chinese Room Oriental ( CRO) Was my favourite restaurant when I was in school ....! Anytime, anyone , used to ask me where I wanted to go, pat came the reply.....CRO ! I was passing by the other day....and realized that it had been a very long time since I visited this place.... Hoping to have the same delightful experience....I walked in. Looks like nothing has changed in terms of decor, in all these years.....the same Oriental theme obvious in the artifacts and overall interior. Chicken Wonton soup- The same taste that I remember.....a teeny tiny piece of chicken inside huge wantons, in a clear broth....with lots of fresh spring onion. Paper wrapped Chicken (steamed) - Now this one is really good...! Veg Fried Rice - Decent... Shredded Lamb with diced Capsicum - This one had lamb, onion, capsicum in a medium spicy, brown sauce... Stewed Chicken with Green Onion - I like bland food in general.... so I liked this one. Desert- This was the moment I was waiting for...

Hades Names and epithets As with almost every name for the gods, the origin of Hades's name is obscure. The name as it came to be known in classical times was Ἅιδης, Hāidēs. Later the iota became silent.[3] Originally it was *Awides which has been claimed to mean "unseen".[4] This changed into Ἀΐδης, Aïdēs (and afterwards Āïdēs), with the dropping of the digamma. Poetic variants of the name include Ἀϊδωνεύς, Aïdōneus, and *Ἄϊς, Aïs (a nominative by conjecture), from which the derived forms Ἄϊδος, Āïdos, Ἄϊδι, Āïdi, and Ἄϊδα, Āïda, (gen., dat. and acc., respectively) are words commonly seen in poetry.[7] From fear of pronouncing his name and considering that from the abode below (i.e. the soil) come the riches (e.g. from the soil grow the fertile crops, from the soil come the metals and so on), c. 5th century BCE the Greeks started referring to Hades as Πλούτων, Ploutōn,[8] a name that is an abbreviation of Πλουτοδότης, Ploutodotēs, or Πλουτοδοτήρ, Ploutodotēr, meaning "giver of wealth".[9] Cult

polls - What is the best comment in source code you have ever encountered ARTEMIS In the classical period of Greek mythology, Artemis (Ancient Greek: Ἄρτεμις) was often described as the daughter of Zeus and Leto, and the twin sister of Apollo. She was the Hellenic goddess of the hunt, wild animals, wilderness, childbirth, virginity and protector of young girls, bringing and relieving disease in women; she often was depicted as a huntress carrying a bow and arrows.[6] The deer and the cypress were sacred to her. In later Hellenistic times, she even assumed the ancient role of Eileithyia in aiding childbirth. Etymology Didrachm from Ephesus, Ionia, representing the goddess Artemis Silver tetradrachm of the Indo-Greek king Artemidoros (whose name means "gift of Artemis"), c. 85 BCE, featuring Artemis with a drawn bow and a quiver on her back on the reverse of the coin Artemis in mythology Leto bore Apollon and Artemis, delighting in arrows, Both of lovely shape like none of the heavenly gods, As she joined in love to the Aegis-bearing ruler. Birth Childhood Intimacy Actaeon

Top 10 Pinterest Pins This Week We repin images on Pinterest that capture our attention and inspire new ideas. This week's top 10 Pinterest pins contains 10 items that will have you clicking the "repin" button. This week, we included pins that ranged from handy household items to helpful tips for living. Pinners this week were quick to repin a special hairbrush that uses absorbent microfiber bristles to dry your hair as you brush. (Don't worry, it has a mildew guard!) FOLLOW: Mashable on Pinterest For our top 10 pins post, we use Pinterest analytics tool Repinly to see what pinners are repinning and find interesting. What were some of your favorite Pinterest pins this week? Mashable See On Thumbnail Courtesy of Etsy, Fishstikks