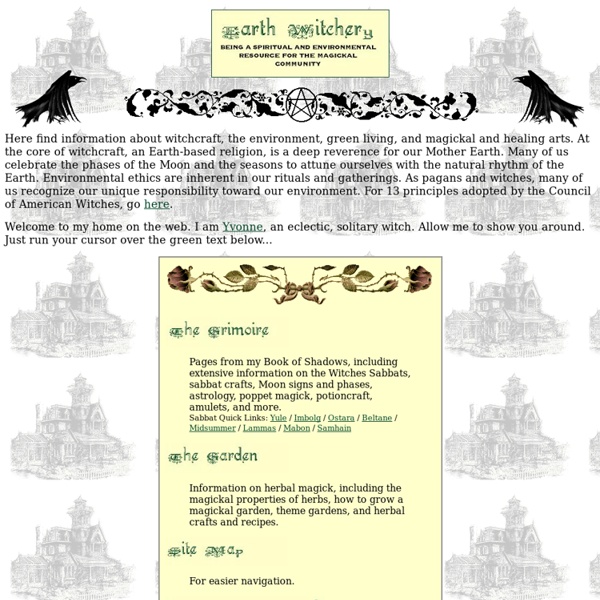 Magickal Athenaeum - WikiPagan The Magical Athenaeum is the largest collection of magickal PDF books on the internet, with several hundred files. The resource is maintained by Asiya's Shadows. Books are in the Adobe Portable Document Format (PDF) and may be viewed and printed using Adobe Reader. Magical Athenaeum Paganism & Witchcraft The Odin Brotherhood 8 Ways To Strengthen Your Auric Field! You are continuously receiving information from your environment, not only through your five senses, but also through your auric field! You are able to perceive when someone is staring at you without seeing them, you can sense how somebody is feeling despite a facade, and you find some people to be energizing while others might be draining. Your aura is an extension of you. It is the energy field that surrounds your body. Many ancient cultures believe that illness first starts because of a weakness in the aura.

Pagan Magic: Wicca and Witchcraft Shop - Delivery Worldwide - Articles - Rituals - Performing Wiccan Rituals – A Guide 1. Cleansing Yourself Although cleansing is often considered as a physical action, it' is also important to cleanse yourself on a spiritual level, shaking off any psychic debris. The Hedge Wife: Magical Herbalism Part 1 Witchcraft and herbalism go hand in hand and have done so for centuries. In the past, witches were called wise women or wise men and were often the only people their neighbors could go to for healing. Doctors were sparse and so expensive only gentry could afford them or...there were none to be found in general.

Hearth and Home Witchery Imbolg Crafts and Activities for Children There are so many activities to do with your young ones at Oimelc, many of which can also be done at the Spring Equinox. Older children can help make candles (there are lots of kits out there to make it easier) and candle holders. Younger children can make "candles" from toilet paper rolls and construction paper. If you choose to start your Spring Cleaning, a small brush broom and dustpan, a clean cloth to help wipe down cabinet doors or dust tables or child size cleaning equipment for those little "can I help?" little ones. The Smudging Ceremony Our Native elders have taught us that before a person can be healed or heal another, one must be cleansed of any bad feelings, negative thoughts, bad spirits or negative energy - cleansed both physically and spiritually. This helps the healing to come through in a clear way, without being distorted or sidetracked by negative "stuff" in either the healer or the client. The elders say that all ceremonies, tribal or private, must be entered into with a good heart so that we can pray, sing, and walk in a sacred manner, and be helped by the spirits to enter the sacred realm. Native people throughout the world use herbs to accomplish this. One common ceremony is to burn certain herbs, take the smoke in one's hands and rub or brush it over the body. Today this is commonly called "smudging."

Book of Shadows This Book of Shadows was found at #WICCAN WAY listed as 'Public Domain'. Most of the material contained here is from ourbooks EIGHT SABBATS FOR WITCHES, WITCHES WAY (Also published as THE WITCHES BIBLE), and several other of our works, although some of it is also from other published sources, and 'traditional'. We've 'reclaimed' the bits which are ours and added to it to our own Web Pages - after all, we did publish most of it in our books!

The Best Low Fat Vegan Chef Recipes of 2012 — Low Fat Vegan Chef Recipes A little bit of a prelude: 2012 was an incredibly crazy year for me. Here’s the short versionof it: My website really started growing back in January 2012. I went to Dr. John McDougall’s 3 Day Advanced Study Weekend in February and started promoting my site to the McDougalls and others I met there. I released my first solo recipe ebook in March, Comfort Soups To Keep You Warm. Nine Herbs Charm The Nine Herbs Charm is an Old English charm recorded in the 10th-century[1] Lacnunga manuscript.[2] The charm is intended for the treatment of poisoning and infection by a preparation of nine herbs. The numbers nine and three, significant in Germanic paganism and later Germanic folklore, are mentioned frequently within the charm.[2] The poem contains references to Christian and English Pagan elements, including a mention of the major Germanic god Woden. According to R. K. Gordon, the poem is "clearly an old heathen thing which has been subjected to Christian censorship.

The Recapitulation Exercise The recapitulation is an ancient technique for retrieving and healing your energy. It also teaches you how to prevent current energetic loss. Those who pursue it shamanically consider the recapitulation to be a never-ending process. The technique has steps, phases and ramifications as the process unfolds for the individual practicing it. It is not a new technique, and not one that I invented. One form or another of the core idea of the recapitulation is present in all the shamanic traditions. Gaia’s consciousness This Category, *Pagan Ethics, contains a series of posts that are a commentary on a book – Living with Honour – written by Emma Restall Orr. My interest in Pagan ethics emerges out of a need to capture in words the attitudes and behaviour that might manifest out of a person’s love of Gaia and dedication to an Earthen Spirituality. Emma’s beautiful book, which I at first eagerly skimmed, then read slowly and carefully and now enjoy re-reading has stimulated my thinking and inspired the comments in these posts. I obviously highly recommend the book and hope that my commentary serves the spirit of *Pagan Ethics and challenges the reader to examine their attitudes and world view toward a greater reverence for our place within and among the life of Gaia.

Top ten ancient Irish charms and spells Celebrate all things mysterious and magical on "Occult Day" with these ancient Irish rituals. Photo by: Getty Images/iStockphoto There are many practicing witches and druids in Ireland today who believe in ancient traditions and folk magic. We’ve put together a list of ancient charms and spells based on this Irish magic. Burning Incense Is Psychoactive: New Class Of Antidepressants Might Be Right Under Our Noses Religious leaders have contended for millennia that burning incense is good for the soul. Now, biologists have learned that it is good for our brains too. An international team of scientists, including researchers from Johns Hopkins University and the Hebrew University in Jerusalem, describe how burning frankincense (resin from the Boswellia plant) activates poorly understood ion channels in the brain to alleviate anxiety or depression.

DNA Activation, Upgrade and Ascension * Click HERE to visit our Official Facebook page and be sure to "Like" us!!! (opens in a new window) * Also visit in5D Connection where you can find your soul mate or join one of our amazing groups. EVERYONE is welcome! What is DNA activation, how can you activate your DNA and how is the ascension process involved with DNA activation?