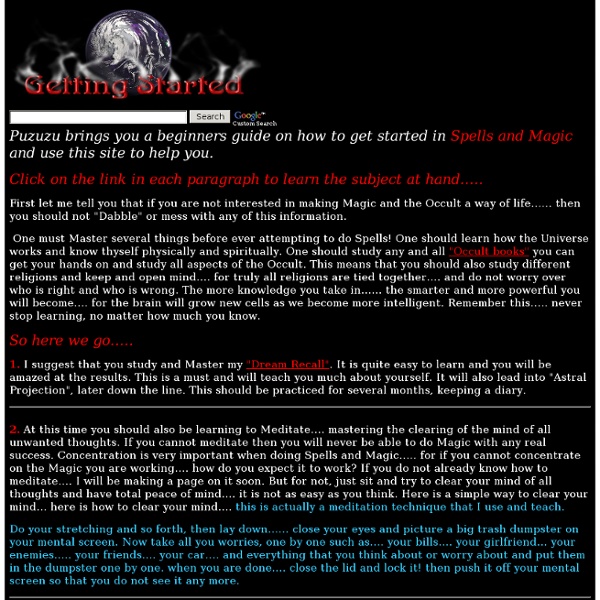 Puzuzu brings you a beginners guide on how to get started in Spells and Magic and use this site to help you. What is Thou looking for? If you can't find it, then search the web for right here... Custom Search Click on the link in each paragraph to learn the subject at hand. First let me tell you that if you are not interested in making Magic and the Occult a way of life, then you should not "Dabble" or mess with any of this information. One must Master several things before ever attempting to do Spells! So here we go... 1. 2. Do your stretching and so forth, then lay down, close your eyes and picture a big trash dumpster on your mental screen. 3. 4. 5. At this time I should warn you of one thing. Magic is a way of life, not a game. 6. Now remember this, Astral Projection or OBE's (out of body experience) can take anywhere from weeks to years to master and you must take your time and do not give up. 7. *Stay away from the Black Magic until you have a couple years of practice and knowledge.

Enochian Magick Reference Document Back Home Table of Contents Note: Due to their large size, the illustrations for this document are on separate linked pages. witch By Doreen Valiente Hear now the words of the witches, The secrets we hid in the night, When dark was our destiny’s pathway, That now we bring forth into the light. Mysterious water and fire, The earth and the wide-ranging air.

Magic Protection Defence Against The Dark Arts: Hexenspiegel Defense Against The Dark Arts: Hexenspiegel Hexenspiegel have been used as a major defence against the dark arts for as long as people have been around. There is something about the flowing, reflective, smooth properties of metal that makes for a natural defence against incoming bad energy, which is by nature, disturbed, impure and chaotic. In the olden days, people used to use mirrors made from highly polished pieces of silver or gold, sometimes also copper for reflecting the intention back on the sender of the black magic or evil eye - that's both a defence as well as an attack all rolled into one. The more the bad witch or bad person tries harder to send more and more negativity, the more it is reflected right back at them - and that's already happening with a fairly plain piece of reflective material.

The Sabbats of Wicca Learn Wicca / Wicca 101 / Faerie Tradition Because witches honor nature, they have eight festivals, or Sabbats, that mark the year as it turns through its seasons. The following is basic information about these Sabbats, and includes both standard Wiccan information as well as my personal Sabbat lore and experiences, in other words, what I perceive the Sabbats to be. Samhain happens near Halloween and is when the Wiccan year begins. My altar cloth is black, because we are in the time of year that is dark.

Sacred Texts: Evil Sacred-texts home Gothic Buy CD-ROM Evil is, on one level, a cultural construct. The Easter Islanders believed that stealing, if successful, was virtuous. This was probably a social mechanism for redistributing scarce items on a small island. Magickal Evocation and Invocation Magickal Evocation and Invocation There are basically two ways of summoning an entity or working with energy: "Evocation" and "Invocation." Spiritual evocation is summoning an entity whether it be a Demon, spirit, deceased person, elemental, or energy, and the being appears outside of the operator.

Book of Shadows This Book of Shadows was found at #WICCAN WAY listed as 'Public Domain'. Most of the material contained here is from ourbooks EIGHT SABBATS FOR WITCHES, WITCHES WAY (Also published as THE WITCHES BIBLE), and several other of our works, although some of it is also from other published sources, and 'traditional'. We've 'reclaimed' the bits which are ours and added to it to our own Web Pages - after all, we did publish most of it in our books!

The Hidden Children of the Goddess, don't worry, Goddess Has Your Back The Pentagram and the Five Elements When we begin a ritual and call in the Elements, we are inviting them to protect us and help us with something we want in life. For example, if I’m doing a ritual related to love, I may invoke Water because it focuses on emotions. I may want to bring passion to some situation in my life, and I would then invoke Fire. How do we invoke an Element? Western Esoteric Texts Sacred-texts home Neopaganism GrimoiresBuy CD-ROM Buy Esoteric and Occult Books This page indexes resources at this site in the Western Esoteric tradition. There is much more related to this topic at this site, listed below. The Divine Pymander of Hermes Mercurius Trismegistus, translated by John Everard [1650]

Chants, Blessings, Prayers and Charms A Spell to Cast Away Darkness Belisama Fire 2001 In the center of the darkest storm, Is a brilliant rainbow, bright and warm. Look past the darkness that you see, Everyday Magic Put one tablespoon of cinnamon and four tablespoons of parsley (not stated whether fresh or dried so take your pick) in the filter cup of your coffee maker. Use five cups of water and allow to brew. Draw a warm bath and add one cup of the tea. As you pour it into the bath, chant: Money come from far and near. *Magical Recipes Online* Your free online Magazine on Witchcraft, Occultism & Ancient Recipes: How to invoke the Phoenix, the Sacred Bird of Fire. Ancient Egyptian Spells, Rituals and Magic: How to Invoke the Sacred Phoenix, the Bennu Birdhow to call Phoenix for Sun's & Fire's Blessings What can someone write and say about the Sacred Phoenix, the Holy Bird Spirit, the King of Fire, the Great commander and Father of the Salamanders. As you have already read in the most detailed article of the Web, the Phoenix is the Soul of the Sun (Ba of Ra, the Sun God), the personification of the Circle of Sun, a symbol common in every ancient and great civilization. Although Phoenix is not worshipped as God, he is a universally respected Spirit summoned for inspiration and blessings!