How to Learn Witchcraft 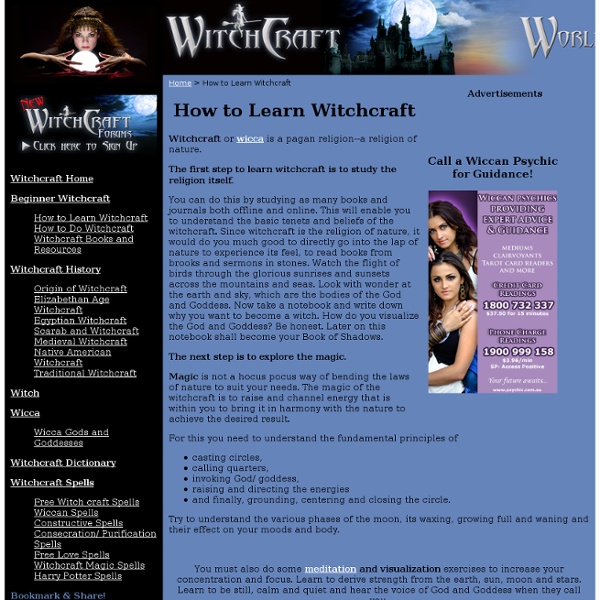 Advertisements Call a Wiccan Psychic for Guidance! Home > How to Learn Witchcraft Witchcraft or wicca is a pagan religion--a religion of nature. The first step to learn witchcraft is to study the religion itself. You can do this by studying as many books and journals both offline and online. The next step is to explore the magic. Magic is not a hocus pocus way of bending the laws of nature to suit your needs. For this you need to understand the fundamental principles of casting circles, calling quarters, invoking God/ goddess, raising and directing the energies and finally, grounding, centering and closing the circle. Try to understand the various phases of the moon, its waxing, growing full and waning and their effect on your moods and body. You must also do some meditation and visualization exercises to increase your concentration and focus. Now you can begin your basic spell work starting with your new moon ritual. Do not go after the word-for-word rituals that you read everywhere. Related:  Begginner & Advanced Wirchcraft Studies • witch information

Hecate Becoming a Witch Becoming a Witch How to become a Witch is one of the major questions asked when they are just discovering the Craft. The answer to that question is one does not become a Witch.....they are a Witch, and it is just reaching down and finding it within them. Becoming a Witch means learning how to work ritual and magick, methods of raising, containing and releasing power, how to work with the energies of the moon and earth and the principles of sympathetic magick upon which most Witchcraft magick is based. Witches are very unique individuals and some, no....... many, might call us strange. Some people who become interested in Witchcraft have expectations that Witches are gifted with amazing powers as the result of a particular ceremony or spell. The decision to become a Witch is not one you should take lightly. To become a Witch is to become changed within yourself and a changer of things outside you. Once your decision is made, you have already stepped onto the path of Witchcraft.

Witchcraft Training Witchcraft Training Witchcraft today is folk magic, a gentle and ancient use of little known and even less understood forces to effect positive change. Wicca is a modern term for a spiritual path rooted in the worship of the Goddess and God, with a deep and loving respect for nature. Magic and reincarnation are also accepted parts of this path, which has many diverse traditions. With the word about Witchcraft spreading today you may find yourself seeking out the craft; but how does one become part of it? Information on witchcraft is readily available, but how does the seeker wade through the sea of information and misinformation and know what is valid for them. General information on the Old Religion is available from witches themselves, but entry into their order is not. There is, of course, nothing wrong with this approach! At Willow’s Hollow we teach the basic tenants of Witchcraft, giving you the tools to travel your own path with the knowledge and foundation to build upon! 1.

Conjuring Spirits the Old Fashioned Way Agrippa is a great resource for all things magical. Using the tables of the scales of numbers in his 2nd Book of Occult Philosophy, you will be able to put together whatever type of ritual you could possibly need. However, the details on how to conjure spirits aren’t in the Three Books. Instead, you find a basic outline in the spurious Fourth Book of Occult Philosophy. This ritual can be used to conjure any of the spirits listed in the Tables of Book 2. What you need: Something with which to trace or form a large magic circle on the floor around your ritual area. What you don’t need, but are nice to have: Candles Incense Scrying crystals or a bowl of water, a pendulum, or imagination Some people would say that imagination is a necessary thing, and I agree. Now what I’m about to tell you is the bare bones basics of how to conjure a spirit. But it’s not necessary for spirit work. All you need is love. Oh wait, that’s a Beatles song. Here’s the real process: Draw the Spirit’s Symbol That’s it.

Wicca Altar Tools And Their Uses What do you need on your Wicca altar? Altar tools don't have to be complicated or costly. You don't really need anything other than what you have on hand, but you might want the customary Tools of the Witch Trade . . . See List Below. Ritual tools are as individual as the witch who uses them. But it helps to know what the basic tools are and how to use them. In the old Wicca, there are specific rules about these things. In modern Wicca, your own heart is your best guide to what you need on your altar. WITCH TIP: Don't Have An Altar? Altar tools are Wicca ritual tools - you need them even if you don't have an altar. If you haven't decided yet whether you should have one or why you need an altar, read Your Wicca Altar.) There are some standard Wiccan altar tools. While this article deals specifically with your personal altar, you may want to use your ritual items on public altars as well. WITCH TIP: All altar tools have symbolic meaning. Athame (It is pronounced AH-tha-may or ah-THAW-may.) Bell

Paganism and Wicca: Solitary witches and covens by Luthaneal Walking the Path: Going it alone vs. practicing with a group As a fresh, newbie pagan you're soon going to have the delightful choice of deciding whether to be solitary in your beliefs or flirt with joining a coven. Once a young Pagan or witch has established what they believe and the path that they wish to follow, they will sooner or later be presented with the choice of walking that path alone or joining a group with similar beliefs. Both methods have advantages and disadvantages that should be considered when deciding whether or not to join others. These and many other questions will need to be answered while you determine whether you are better suited to solitary practice or group practice. The first thing that you should determine about any potential group is whether or not their beliefs are compatible with your own. Each group will have their own way of practicing, whether they are more of a religious group or just a coven of witches following a magical path. . . . . .

Personal Experience: Nikki333 How to become a Wiccan or Witch How to Become a Wiccan or Witch Being a Wiccan or Witch is generally not something you are born as or just wake up one morning and decide to become. More often than not, you come across it by accident unless you were raised that way. As Silver RavenWolf accurately stated in her book To Ride A Silver Broomstick. If you are one who has seen striking similarities between what you believe and have found here, there are generally accepted ways to increase your awareness and find communion with others who feel the same. Read everything you can get your hands on that will tell you more about the beliefs of Wicca and Witchcraft. While doing this, you will begin to form associations and hopefully find correspondances within yourself. There are no right or wrong answers and it is not a test. Most importantly, listen to your inner voice. This ritual should be yours and yours alone. Mine was on the shore of a remote high cascade mountain lake here in Oregon. "An It Harm None." Herne

Magickal Wicca Resources | Wiccan History, Practice and Beliefs – Articles and other Free Information & Resources Wicca Spirituality Homepage The Sabbats of Wicca Learn Wicca / Wicca 101 / Faerie Tradition Because witches honor nature, they have eight festivals, or Sabbats, that mark the year as it turns through its seasons. The following is basic information about these Sabbats, and includes both standard Wiccan information as well as my personal Sabbat lore and experiences, in other words, what I perceive the Sabbats to be. Samhain happens near Halloween and is when the Wiccan year begins. Yule or winter solstice happens near December 21, which is the longest darkest night of the year. Brigid or Candlemas, on February 2, is the festival of the Goddess Brigid, patron of poetry, healing, and metalsmithing. Spring Equinox happens about March 21, and I pass from one time into the other, yet am between one time and another. Beltane or May-Day, is a celebration of love. The Ancient people, from the Priests and Priestesses to the farmers understood the power of love: loving company between two people is an echo of the act that created all things.