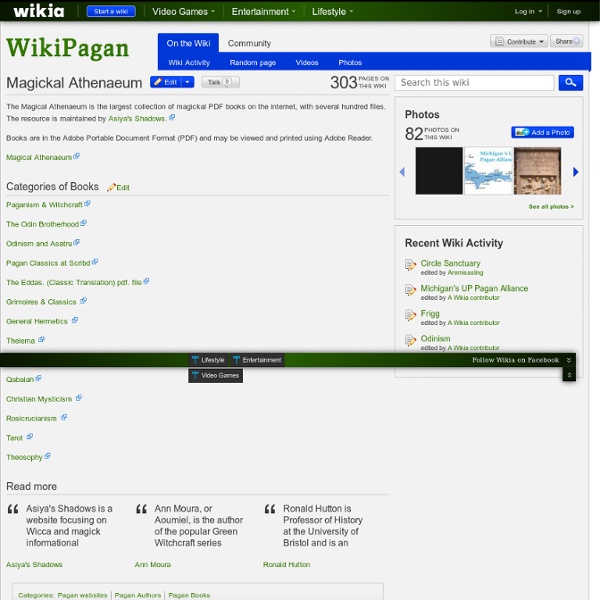 Hearth and Home Witchery Imbolg Crafts and Activities for Children There are so many activities to do with your young ones at Oimelc, many of which can also be done at the Spring Equinox. Older children can help make candles (there are lots of kits out there to make it easier) and candle holders. Younger children can make "candles" from toilet paper rolls and construction paper. If you choose to start your Spring Cleaning, a small brush broom and dustpan, a clean cloth to help wipe down cabinet doors or dust tables or child size cleaning equipment for those little "can I help?" little ones. Magickal Herbs V W X Y Z VALERIAN: Valeriana officinalis. Feminine, Venus/Mercury, Water/Earth. Origin: Over 150 species. Native to Europe, northern Asia, Africa, U.S.A., India and Japan. Part Used: Root. Uses: Animals, consecration, exorcism, happiness, hex-breaking, love, lust, peace, protection, purification, sleep.

Top ten ancient Irish charms and spells Celebrate all things mysterious and magical on "Occult Day" with these ancient Irish rituals. Photo by: Getty Images/iStockphoto There are many practicing witches and druids in Ireland today who believe in ancient traditions and folk magic. We’ve put together a list of ancient charms and spells based on this Irish magic. 9 Mindfulness Rituals to Make Your Day Better “Smile, breathe and go slowly.” - Thich Nhat Hanh, Zen Buddhist monk Post written by Leo Babauta. Are you simply moving through your day, without fully living? I did this for many years.

The Hedge Wife: Magical Herbalism Part 1 Witchcraft and herbalism go hand in hand and have done so for centuries. In the past, witches were called wise women or wise men and were often the only people their neighbors could go to for healing. Doctors were sparse and so expensive only gentry could afford them or...there were none to be found in general.

Crystals - Minerals and their Properties Minerals have been close to humans for as long as man has walked the earth and gazed with wonder at their natural beauty and mystery. There are thousands of types of minerals, each with it's own unique color patterns, shapes, energetic properties, and metaphysical properties. This is a list of minerals and their properties. You will find the minerals name, it's metaphysical properties, and a brief description of the minerals color and shape.

The Best Low Fat Vegan Chef Recipes of 2012 — Low Fat Vegan Chef Recipes A little bit of a prelude: 2012 was an incredibly crazy year for me. Here’s the short versionof it: My website really started growing back in January 2012. I went to Dr. John McDougall’s 3 Day Advanced Study Weekend in February and started promoting my site to the McDougalls and others I met there. I released my first solo recipe ebook in March, Comfort Soups To Keep You Warm. Buddhism and the Brain Credit: Flickr user eschipul Over the last few decades many Buddhists and quite a few neuroscientists have examined Buddhism and neuroscience, with both groups reporting overlap. I’m sorry to say I have been privately dismissive. One hears this sort of thing all the time, from any religion, and I was sure in this case it would break down upon closer scrutiny.

Nine Herbs Charm The Nine Herbs Charm is an Old English charm recorded in the 10th-century[1] Lacnunga manuscript.[2] The charm is intended for the treatment of poisoning and infection by a preparation of nine herbs. The numbers nine and three, significant in Germanic paganism and later Germanic folklore, are mentioned frequently within the charm.[2] The poem contains references to Christian and English Pagan elements, including a mention of the major Germanic god Woden. According to R. K. Gordon, the poem is "clearly an old heathen thing which has been subjected to Christian censorship.