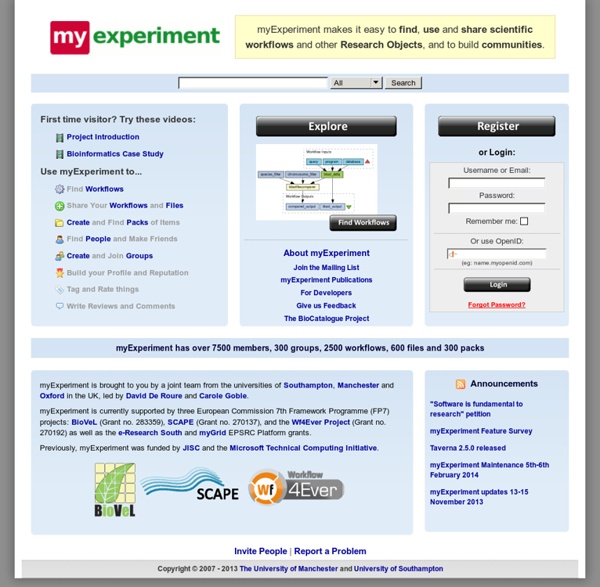 PLoS Biology : Publishing science, accelerating research A Peer-Reviewed, Open Access Journal Current Issue PLOS Biology is a peer-reviewed, open-access journal featuring research articles of exceptional significance in all areas of biological science, from molecules to ecosystems. Taverna The Biodiversity Virtual e‑Laboratory (BioVeL) project, led by the School of Computer Science and Informatics at Cardiff University, has €5 million in funding and is seeking to provide a vital service that will improve the way scientists share, analyse and present information in the growing area of biodiversity science. The project includes the application of Taverna, myExperiment and the BioCatalogue. Biodiversity science is the study of plants and animals that inhabit our planet and the environments they live in. Amid growing concerns over the extinction rate of certain species as their natural habitats are increasingly destroyed, and with biodiversity becoming as important as climate change on the political agenda, this new research project could not be more timely.

Scientists observe single gene activity in living cells in detail for first time Researchers at Albert Einstein College of Medicine of Yeshiva University have for the first time observed the activity of a single gene in living cells. In an unprecedented study, published in the April 22 online edition of Science, Einstein scientists were able to follow, in real time, the process of gene transcription, which occurs when a gene converts its DNA information into molecules of messenger RNA (mRNA) that go on to make the protein coded by the gene. Robert Singer, Ph.D., co-director of the Gruss Lipper Biophotonics Center at Einstein and professor and co-chair of anatomy and structural biology, is senior author of the paper. The study's lead author is Daniel Larson, Ph.D., previously a member of Dr.

DAVID: Gene Functional Classification What does this tool do? Quickly translate given gene IDs to corresponding gene names in a batch way Provide links for each genes to DAVID Gene Report for in-depth information Search functionally related genes within user's input gene list or genome Key Concepts of "Search Related Genes" Any given gene is associating with a set of annotation terms. If genes share similar set of those terms (annotation profile), they are most likely involved in similar biological mechanisms. How Water Shapes DNA Water molecules surround the genetic material DNA in a very specific way. Scientists at the Helmholtz-Zentrum Dresden-Rossendorf (HZDR) have discovered that, on the one hand, the texture of this hydration shell depends on the water content and, on the other hand, actually influences the structure of the genetic substance itself. These findings are not only important in understanding the biological function of DNA; they could also be used for the construction of new DNA-based materials. The DNA's double helix never occurs in isolation; instead, its entire surface is always covered by water molecules which attach themselves with the help of hydrogen bonds.

All Non-Africans Part Neanderthal, Genetics Confirm If your heritage is non-African, you are part Neanderthal, according to a new study in the July issue of Molecular Biology and Evolution. Discovery News has been reporting on human/Neanderthal interbreeding for some time now, so this latest research confirms earlier findings. Damian Labuda of the University of Montreal's Department of Pediatrics and the CHU Sainte-Justine Research Center conducted the study with his colleagues.

New Self-Cloning Lizard Found in Vietnam Restaurant {*style:<b>You could call it the surprise du jour: A popular food on Vietnamese menus has turned out to be a lizard previously unknown to science, scientists say. </b>*} What's more, the newfound is no run-of-the-mill reptile —the all-female species reproduces via cloning, without the need for male lizards. Single-gender lizards aren't that much of an oddity: About one percent of lizards can reproduce by parthenogenesis, meaning the females spontaneously ovulate and clone themselves to produce offspring with the same genetic blueprint.

PCR Virtual Lab Primers are short pieces of DNA that are made in a laboratory. Since they're custom built, primers can have any sequence of nucleotides you'd like. In a PCR experiment, two primers are designed to match to the segment of DNA you want to copy. Through complementary base pairing, one primer attaches to the top strand at one end of your segment of interest, and the other primer attaches to the bottom strand at the other end. In most cases, 2 primers that are 20 or so nucleotides long will target just one place in the entire genome. Primers are also necessary because DNA polymerase can't attach at just any old place and start copying away.

The Biology Project: Cell Biology en español Cell Membranes Learn that membranes are fluid, with components that move, change, and perform vital physiological roles as they allow cells to communicate with each other and their environment. Cell Signaling Learn that living organisms constantly receive and interpret signals from their environment. Cells of multi-cellular organisms also receive signals from other cells, including signals for cell division and differentiation. Studying Cells Introduce yourself to the cell as the fundamental unit of life and the scientific method. The Cell Cycle & Mitosis Understand the events that occur in the cell cycle and the process of mitosis that divides the duplicated genetic material creating two identical daughter cells.