Learn English podcast. Learn English through the use of jokes and humor. Math Jokes and Riddles for Kids at EnchantedLearning.com. The Best FREE Games. Free Online Games and Premium Games. Teaching English with Jokes. Chickens crossing. Why did the chicken cross the road? 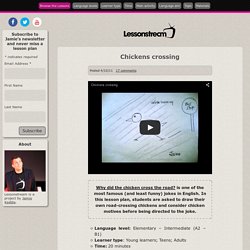 Is one of the most famous (and least funny) jokes in English. In this lesson plan, students are asked to draw their own road-crossing chickens and consider chicken motives before being directed to the joke. Language level: Elementary – Intermediate (A2 – B1)Learner type: Young learners; Teens; AdultsTime: 20 minutesActivity: Drawing; Writing sentencesTopic: Jokes; English humourLanguage: The infinitive of purposeMaterials: Materials freeChickens crossing [downloaded 3166 times] Lesson plan outline Give every student in the class a scrap piece of paper.Ask students to draw a picture of a chicken crossing the road.

Note: Some of your students may be reluctant artists. Ask everyone to think of a name for their chickens. Give an example or two to illustrate the infinitive of purpose. While students are writing their sentences, go around the class and help with language. Ask everyone to stand up. Variation Follow ups Image credit. By Jamie Keddie » The train tunnel joke. This short film was directed by Ehsan Amani (Iran). 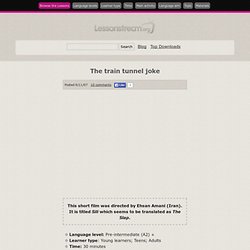 It is titled Sili which seems to be translated as The Slap. Language level: Pre-intermediate (A2) +Learner type: Young learners; Teens; AdultsTime: 30 minutesActivity: Listening; Writing; SpeakingTopic: TransportLanguage: Verbs of thought (wonder, wish, hope, etc)Materials: Video; WorksheetThe train tunnel joke [downloaded 1986 times] Lesson plan outline. Joke. A joke is something spoken, written, or done with humorous intention.[1] Jokes may have many different forms, e.g., a single word or a gesture (considered in a particular context), a question-answer, or a whole short story. 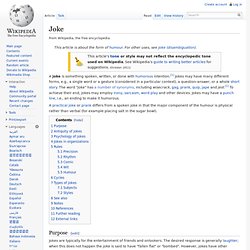 The word "joke" has a number of synonyms, including wisecrack, gag, prank, quip, jape and jest.[1] To achieve their end, jokes may employ irony, sarcasm, word play and other devices. Jokes may have a punch line, i.e., an ending to make it humorous. A practical joke or prank differs from a spoken joke in that the major component of the humour is physical rather than verbal (for example placing salt in the sugar bowl).

Purpose[edit] Jokes are typically for the entertainment of friends and onlookers. Jokes in English for the ESL/EFL Classroom - Riddles. Teachers often use jokes in the ESL/EFL classroom to teach culture, grammar and vocabulary. 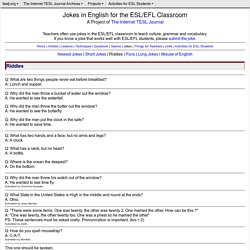 If you know a joke that works well with ESL/EFL students, please submit the joke. Home | Articles | Lessons | Techniques | Questions | Games | Jokes | Things for Teachers | Links | Activities for ESL Students Newest Jokes | Short Jokes | Riddles | Puns | Long Jokes | Misuse of English Q: What are two things people never eat before breakfast? A: Lunch and supper. Q: Why did the man throw a bucket of water out the window? Q: Why did the man throw the butter out the window?

Q: Why did the man put the clock in the safe? Q: What has two hands and a face, but no arms and legs? Q: What has a neck, but no head? Q: Where is the ocean the deepest? Q: Why did the man throw his watch out of the window? Q: What State in the United States is High in the middle and round at the ends? Jokes in English (Text and MP3 Files for ESL/EFL) 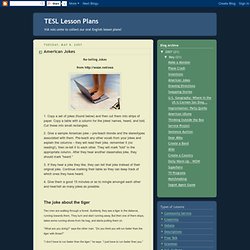 Copy a set of jokes (found below) and then cut them into strips of paper. Copy a table with a column for the jokes' names, heard, and told. Cut these into small rectangles. 2. 3. 4. The joke about the tiger. Good Clean Fun! A Family Humor Archive. Aha! Jokes: Clean Humor and Funny Pictures! Dumb Jokes That Are Funny - Clean Jokes. Kids Jokes. 50 easy jokes for Young English Learners. Sharing laughter after telling a joke to young learners shows we care. 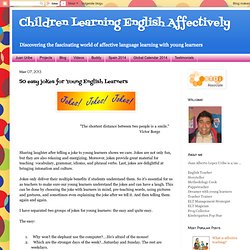 Jokes are not only fun, but they are also relaxing and energizing. Moreover, jokes provide great material for teaching vocabulary, grammar, idioms, and phrasal verbs. Last, jokes are delightful at bringing intonation and culture. Jokes only deliver their multiple benefits if students understand them. So it's essential for us as teachers to make sure our young learners understand the jokes and can have a laugh. Lesson Plan - The Joke's on You! - Grade One - Grade 01. Ims.ode.state.oh.us/ODE/IMS/Lessons/Web_Content/CER_LP_S01_BB_L01_I10_01.pdf.