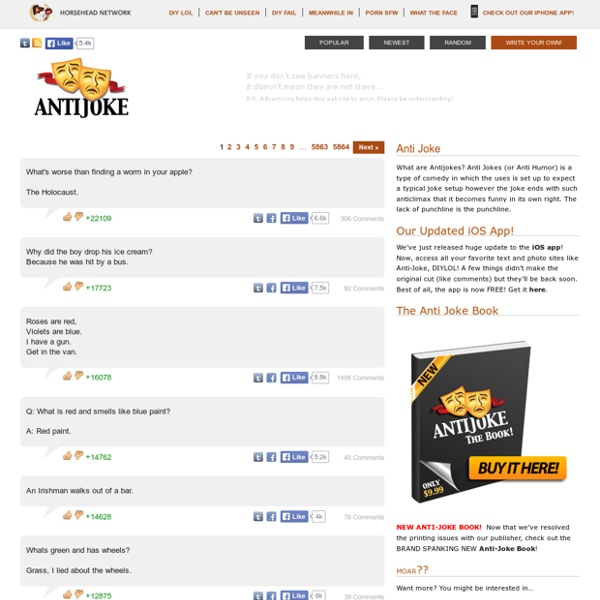 What are Antijokes? Anti Jokes (or Anti Humor) is a type of comedy in which the uses is set up to expect a typical joke setup however the joke ends with such anticlimax that it becomes funny in its own right. The lack of punchline is the punchline. We’ve just released huge update to the iOS app! Now, access all your favorite text and photo sites like Anti-Joke, DIYLOL! A few things didn’t make the original cut (like comments) but they’ll be back soon.

Lots of Jokes - Did You Know? Q. Why do men's clothes have buttons on the right while women's clothes have buttons on the left? A. When buttons were invented, they were very expensive and worn primarily by the rich. Since most people are right-handed, it is easier to push buttons on the right through holes on the left. Chimpanzee Chimpanzees, sometimes colloquially chimp, are two extant hominid species of apes in the genus Pan. The Congo River divides the native habitats of the two species:[2] Chimpanzees are members of the family Hominidae, along with gorillas, humans, and orangutans. Chimpanzees split from the human branch of the family about four to six million years ago. Chimpanzees are the closest living relatives to humans, being members of the tribe Hominini (along with extinct species of subtribe Hominina).

LOTS OF PUNS ...A guy goes into a nice restaurant bar wearing a shirt open at the collar and is met by a bouncer who tells him he must wear a necktie to gain admission. So the guy goes out to his car and he looks around for a necktie and discovers that he just doesn't have one. He sees a set of jumper cables in his trunk. In desperation he ties these around his neck, manages to fashion a fairly acceptable looking knot and lets the ends dangle free.

The OSTRICH Story A man walks into a restaurant with a full-grown ostrich behind him. The waitress asks them for their orders. The man says, "A hamburger, fries and a coke," and Milgram experiment The experimenter (E) orders the teacher (T), the subject of the experiment, to give what the latter believes are painful electric shocks to a learner (L), who is actually an actor and confederate. The subject believes that for each wrong answer, the learner was receiving actual electric shocks, though in reality there were no such punishments. Being separated from the subject, the confederate set up a tape recorder integrated with the electro-shock generator, which played pre-recorded sounds for each shock level.[1] The experiments began in July 1961, three months after the start of the trial of German Nazi war criminal Adolf Eichmann in Jerusalem. Milgram devised his psychological study to answer the popular question at that particular time: "Could it be that Eichmann and his million accomplices in the Holocaust were just following orders? Could we call them all accomplices?"

April Fools' Day 2011 - Internet April Fools' Jokes It’s April Fools’ Day, and you know what that means: All of your favorite tech companies, geek brands, and publications have poured inordinate amounts of time and effort into messing with you. But do you want to be momentarily fooled by their messings-with, or, what’s worse, not see them at all as you browse the Internet today? No, of course not. Luckily, Geekosystem is here to help: online paint program Flame Painter Gallery Flame Painter is a unique paint program, it belongs to my 'I am an Artist' experimental project. I think with tools which inspires you, everyone can be an artist. Strange Young Couple A Texas DPS Trooper was patrolling late at night off the main highway. He sees a couple in a car, with the interior light brightly glowing. He carefully approaches the car to get a closer look.

Speciation Speciation is the evolutionary process by which new biological species arise. The biologist Orator F. Cook seems to have been the first to coin the term 'speciation' for the splitting of lineages or "cladogenesis," as opposed to "anagenesis" or "phyletic evolution" occurring within lineages.[1][2] Whether genetic drift is a minor or major contributor to speciation is the subject matter of much ongoing discussion.

Tablet full of crude jokes and riddles about beer is found - dating from the time of the biblical Exodus By Rob Waugh Updated: 16:52 GMT, 27 January 2012 Crude jokes, beer and a hearty disregard for politicians were part of life in ancient Mesopotamia - 3,500 years ago. A newly translated tablet from the area of present-day Iraq runs through a series of riddles which show that even in 1,500BC, people liked a puzzle.