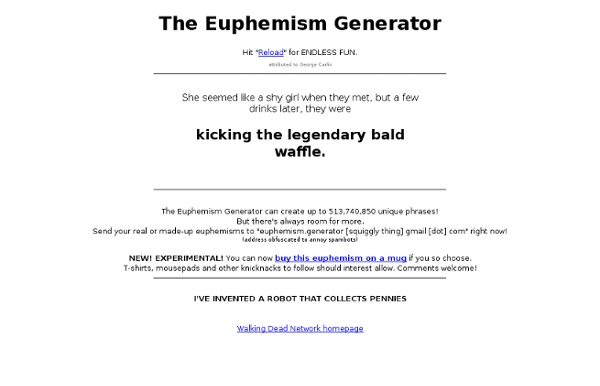 Shakespeare Insult Kit Shakespeare Insult Kit Since 1996, the origin of this kit was listed as anonymous. It came to me on a piece of paper in the 90's with no attribution, and I thought it would make a cool web page. Though I searched for the origin, I could never find it. In 2014, Lara M informed found the originating author. What Am I Riddles at Just Riddles and More 1-25 1. I can be long, or I can be short. I can be grown, and I can be bought. I can be painted, or left bare. I can be round, or I can be square. random word generator Stuck for a word? Need something to adequately describe your day yet doesn't already have some other meaning? Look no further than the random word generator! How does it work? By analyising the frequency of pairs of letters in 45,402 different words it is possible to generate new words which, although don't have any meaning, are reasonably syntactically correct. Sometimes you may get a word which does already exist, but there should be plenty there that don't.

65 Random Funnies - StumbleUpon ← Previous Post Next Post → 65 Random Funnies jon August 21, 2011 3 Click Here For Funny Rage Comics Word Families Advertisement. EnchantedLearning.com is a user-supported site. As a bonus, site members have access to a banner-ad-free version of the site, with print-friendly pages.Click here to learn more. (Already a member? Click here.) LOTS OF PUNS ...A guy goes into a nice restaurant bar wearing a shirt open at the collar and is met by a bouncer who tells him he must wear a necktie to gain admission. So the guy goes out to his car and he looks around for a necktie and discovers that he just doesn't have one. He sees a set of jumper cables in his trunk. In desperation he ties these around his neck, manages to fashion a fairly acceptable looking knot and lets the ends dangle free.

Top 10 Ways to Wake-up Students in Class - SimpleK12 The following is a guest post from Michelle Doman, a 7th and 8th grade Language Arts teacher at Brandon Middle School in Wisconsin. Top 10 Ways to Wake-up Students in Class Many people get a little squeamish, wiggly, and offer a scrunched expression when I respond to the question, “What grades do you teach?” 12 Hilarious Breakups via Letter and Text One woman's very polite yet still scathing break-up letter is spreading across the Internet like wildfire and making men everywhere think twice before even thinking about cheating. The letter, posted on Reddit, went viral and has been viewed more than 1.2 million times. It should be noted that the letter's authenticity has not been completely proven. Either way, it's worth the read. “Guess who left his Facebook open on the computer and got a message from Kelsi? Yeah!