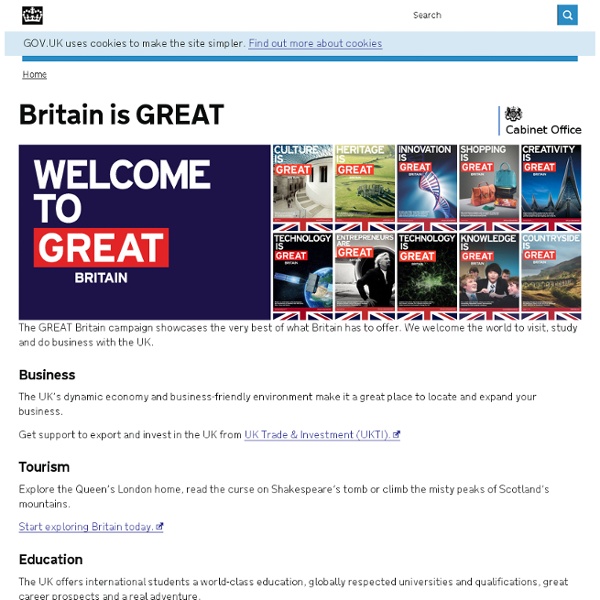 The GREAT Britain campaign showcases the very best of what Britain has to offer. We welcome the world to visit, study and do business with the UK. Business The UK’s dynamic economy and business-friendly environment make it a great place to locate and expand your business. Get support to export and invest in the UK from UK Trade & Investment (UKTI). Tourism Explore the Queen’s London home, read the curse on Shakespeare’s tomb or climb the misty peaks of Scotland’s mountains. Start exploring Britain today. Education The UK offers international students a world-class education, globally respected universities and qualifications, great career prospects and a real adventure. Get advice about studying in the UK including scholarships, choosing a course and life in the UK.

British Royal Family Arms Royal Coat of Arms The main element of the Royal Arms is the shield which is divided into four quarters (see diagram). The three golden lions on a red background, symbolising England, occupy the first and fourth quarters. The Arms of Scotland, a red lion rearing on its hind legs inside a red border, are in the second quarter, and the Arms of Ireland's golden harp with silver strings on a blue background - are in the third quarter. The lion and the unicorn supporting the shield represent England and Scotland respectively. Breaking News English ESL Lesson Plan on Racism An 80-year-old man has been found guilty in the killing of three men 41 years ago. A jury in Mississippi decided Edgar Ray Killen organized the murder of three civil rights workers in June 1964. He escaped murder charges but may spend up to twenty years in prison for manslaughter. Killen was first arrested 41 years ago but was released because of too little evidence.

150 Years of The Tube You are going to listen to a radio clip about the London Undergrounddo a comprehension activity Discuss Does your city have a metro or underground railway?How old is it?Have you ever been on the Tube in London? Differences Between American and British English By Kenneth Beare While there are certainly many more varieties of English, American English and British English are the two varieties that are taught in most ESL/EFL programs. Generally, it is agreed that no one version is "correct" however, there are certainly preferences in use. Let's talk about the UK (still with Scotland) At the beginning of the new school year teachers usually explain to their students what they are going to study. Sometimes efl teachers not only teach grammar but also British culture, so one of the first cultural topics they discuss with their students are the geography of the UK and its form of government. Here you can find an interactive mindmap, a digital poster and a collection of useful websites, just to simplify the work. Click on the Glogster digital poster below, you will find general information about the United Kingdom and some videos. Now take a look at my Cacoo mindmap below about the UK form of government.

FASTEN SEAT BELTS 2 - Travel by Continent - Europe Fasten Seat Belts, a light hearted guide to avoid misunderstandings while travelling. An innovative way to learn languages and pick up cultural tips. Travel by Continent / Europe In the Netherlands, it is the custom on someone's birthday to... Terrorists Kill More Than 100 in Paris French President Francois Hollande has called the deadly attacks on Paris “an act of war.” The French leader spoke after the Islamic State militant group said it was responsible for the violence in the French capital Friday. Six coordinated attacks killed at least 129 people. The French president blamed the Islamic State group for the night of horror. He promised to hunt down the attackers.

Listening: A Tour of London Tower Bridge, London (Copyright: Getty) When you visit a city for the first time, a good way to explore it is to go on an organised sightseeing tour. The tour will give you an overview of what there is to see and also provide you with some historical background. A popular way of seeing London is to go in one of the red double deck buses. Europe Lesson Plans and Resources In addition to the printables that can be used for any country study, I make additional sheets for specific countries ~ mapping activities and flag notebooking sheets {and sometimes more!}. Our studies of Europe included units on the following countries:FranceGermanyGreat BritainItalyNetherlandsRussia {also part of Asia}SpainBelow I have included links to the printables for each country as well as links for our favorite books and resources, along with blog posts that provide our weekly study schedule and some great websites to help you in your study of that country. While studying France we had to include two main things ~ the Eiffel Tower and Monet. The bulk of our first week was spent learning about the country itself: geographic features, the flag, working on mapping projects, and also reading The Little Prince.