BBC Radio 4 - The Film Programme, A tour of the British Isles in accents 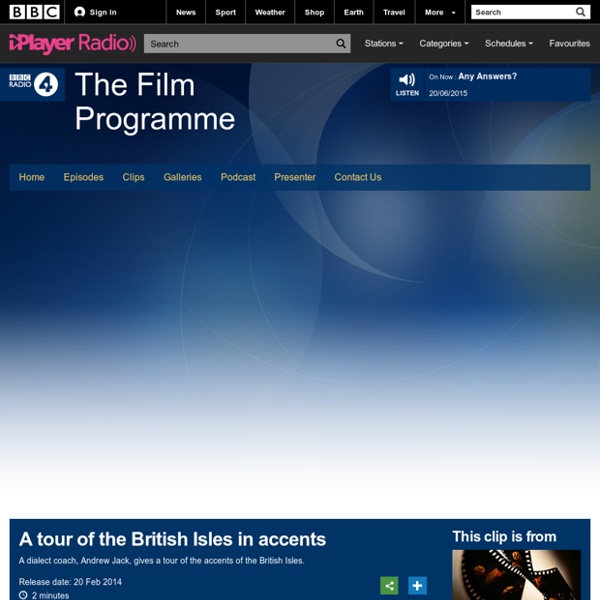 British Royal Family Arms Royal Coat of Arms The main element of the Royal Arms is the shield which is divided into four quarters (see diagram). The three golden lions on a red background, symbolising England, occupy the first and fourth quarters. The Arms of Scotland, a red lion rearing on its hind legs inside a red border, are in the second quarter, and the Arms of Ireland's golden harp with silver strings on a blue background - are in the third quarter. The lion and the unicorn supporting the shield represent England and Scotland respectively. They stand on a small frame called the compartment which sometimes incorporates the plant emblems of Scotland (thistle), Ireland (shamrock) and England (rose). The crayola-fication of the world: How we gave colors names, and it messed with our brains (part I) “Who in the rainbow can draw the line where the violet tint ends and the orange tint begins? Distinctly we see the difference of the colors, but where exactly does the one first blendingly enter into the other? So with sanity and insanity.”—Herman Melville, Billy Budd Spectral Rhythm.

Britain is GREAT The GREAT Britain campaign showcases the very best of what Britain has to offer. We welcome the world to visit, study and do business with the UK. Business The UK’s dynamic economy and business-friendly environment make it a great place to locate and expand your business. EWG's 2013 Shopper's Guide to Pesticides in Produce™ EWG's 2013 Shopper's Guide to Pesticides in Produce™ Eat fruits and vegetables! The health benefits of a diet rich in fruits and vegetables outweigh the risks of pesticide exposure. FASTEN SEAT BELTS 2 - Travel by Continent - Europe Fasten Seat Belts, a light hearted guide to avoid misunderstandings while travelling. An innovative way to learn languages and pick up cultural tips. Travel by Continent / Europe In the Netherlands, it is the custom on someone's birthday to... Gifts, Miscellaneous, Do's & Don'ts, Netherlands

Wonderfully Witty Dog Portraits by Ron Schmidt Though we've seen a lot of dog portraits in our time (see here, here and here) these might just take the cake as the most creative ever. Ron Schmidt is the person behind the company Loose Leashes, an online shop where he sells funny prints of our furry friends in wonderfully witty scenarios. Dog person or not, you can't help but fall in love with these photos. As he told Dogster, “All the images represent the freedom that a dog would have without someone holding its leash. These are the things dogs would do if no one was around and they had absolute freedom.”

Geography of the UK The official title of the UK is the United Kingdom of Great Britain and Northern Ireland . Great Britain (the formerly separate realms of England and Scotland, and the principality of Wales. ) Northern Ireland (also known as Ulster) Numerous smaller islands including the Isle of Wight, Anglesey, and the Scilly, Orkney, Shetland, and Hebridean archipelagos. The UK is an island nation in Western Europe just off the coast of France. Free PowerPoint to Flash Converter That Really Works iSpring Pro goes far beyond PowerPoint to Flash Converter. It provides versatility that will give your content an upgrade it deserves. 1. Audio and Video Narrations To make your presentation more dynamic and interactive, enrich it with voice overs and video narrations.