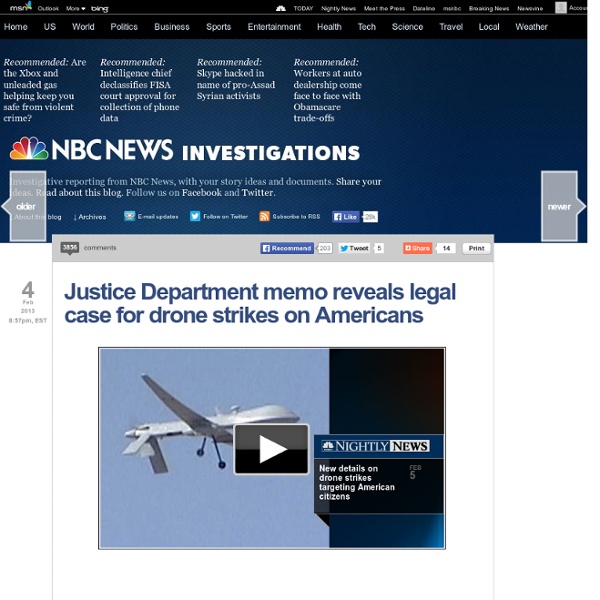 A secretive memo from the Justice Department, provided to NBC News, provides new information about the legal reasoning behind one of the Obama administration's controversial policies. Now, John Brennan, Obama's nominee for CIA director, is expected to face tough questions about drone strikes on Thursday when he appears before the Senate Intelligence Committee. NBC's Michael Isikoff reports. By Michael Isikoff, National Investigative Correspondent, NBC News A confidential Justice Department memo concludes that the U.S. government can order the killing of American citizens if they are believed to be “senior operational leaders” of al-Qaida or “an associated force” -- even if there is no intelligence indicating they are engaged in an active plot to attack the U.S. The secrecy surrounding such strikes is fast emerging as a central issue in this week’s hearing of White House counterterrorism adviser John Brennan, a key architect of the drone campaign, to be CIA director.

US control is diminishing, but it still thinks it owns the world | Noam Chomsky This piece is adapted from Uprisings, a chapter in Power Systems: Conversations on Global Democratic Uprisings and the New Challenges to US Empire, Noam Chomsky's new book of interviews with David Barsamian (with thanks to the publisher, Metropolitan Books). The questions are Barsamian's, the answers Chomsky's. Does the United States still have the same level of control over the energy resources of the Middle East as it once had? The major energy-producing countries are still firmly under the control of the western-backed dictatorships. So, actually, the progress made by the Arab spring is limited, but it's not insignificant. The western-controlled dictatorial system is being eroded. Take the US invasion of Iraq, for example. The United States was seriously defeated in Iraq by Iraqi nationalism – mostly by nonviolent resistance. Iraq was an attempt to reinstitute by force something like the old system of control, but it was beaten back. Declining because of economic weakness? Yes.

Waiting on the RIAA, feds held seized Dajaz1 domain for months Documents unsealed this week reveal that the year-long delay in returning the seized Dajaz1 domain name occurred in part because the government was waiting for copyright holders, including the Recording Industry Association of America, to provide more information. The documents were released in response to a joint request from the Electronic Frontier Foundation, the First Amendment Coalition and Wired (which shares a parent company with Ars). The documents raise fresh questions about the domain seizure process created by Congress in the 2008 PRO-IP Act. Dajaz1.com was (and is) a popular hip hop music blog. After Dajaz1 filed a request to get the seized domain back in early 2011, the government had until May 16 to either return the domain or file a formal forfeiture request. But after the Dajaz1 domain was finally released back to its owner, EFF and its partners pressured the government to unseal the documents in the case. On July 14, the government filed a second requested extension.

Lake Erie Correctional Institution, Ohio Private Prison, Faces Concerns About 'Unacceptable' Conditions When a private prison corporation paid Ohio $72.7 million in 2011 to purchase one of the state's facilities, the company touted the deal as a "groundbreaking" move that would serve as a model for other states looking to cut costs. But in the year since Corrections Corporation of America took over the 1,700-bed Lake Erie Correctional Institution, state audits have found patterns of inadequate staffing, delays in medical treatment and "unacceptable living conditions" inside the prison -- including inmates lacking access to running water and toilets. The state docked the company nearly $500,000 in pay because of the violations. In addition, a major uptick in crime near the private prison has burdened the small town of Conneaut, Ohio, with police there making a series of recent arrests related to attempts to smuggle drugs and alcohol into the facility. Private prison companies typically build their own facilities or manage existing prisons; the Ohio prison sale was the first of its kind.

William Dalrymple: How the affair of Karzai’s Afghanistan is replaying Imperial history – internet lookup list THE name Gandamak means little in the West today. Yet this small Afghan village was once famous for the catastrophe that took place there during the First Anglo-Afghan War in January 1842, arguably the greatest humiliation ever suffered by a Western army in the East. The course of that distant Victorian war followed a trajectory that is beginning to seem distinctly familiar. In 1839, the British invaded Afghanistan on the basis of dubious intelligence about a nonexistent threat: information about a single Russian envoy to Kabul, the Afghan capital, was manipulated by a group of ambitious hawks to create a scare about a phantom Russian invasion, thus bringing about an unnecessary, expensive and wholly avoidable conflict. Initially, the British conquest proved remarkably easy and bloodless; Kabul was captured within a few months and a pliable monarch, Shah Shuja, placed on the throne. The last 50 or so survivors made their final stand at Gandamak.

Confirmed: DOJ Uses Section 702 to Get Title I FISA Warrants In addition to the apparent miscommunication between Mark Udall and Acting (and presumably soon to be confirmed) DOJ National Security Division Head John Carlin, there was an even more telling exchange in today’s hearing. In it, Martin Heinrich asked whether DOJ had yet written down its radical new policy of giving notice to defendants caught using Section 702. Heinrich: As you know in October 2013, after months and months of discussion and debate in which you and the NSD were involved, DOJ adopted a new policy by which Federal prosecutors would inform defendants when they intended to offer evidence informed, obtained, or derived from intelligence collected under Section 702 of FISA. Now, Carlin might be forgiven for all the uming and ahing here. But kudos to Carlin for not using that verb — derived — in his answer, choosing instead to use “was used and led to information that led to.” Um. I’m glad that’s all cleared up.

Remember Aaron Swartz Drones, US Propaganda and Imperial Hubris Pakistanis should be more supportive of having their national sovereignty violated by Americans, according to US-based political scientists who favor drone strikes in Pakistan. I am trying hard not make this sound like an Onion article, even though it does. In a January 23 article for The Atlantic, professors Christine Fair, Karl Kaltenthaler and William J. Miller argue that Pakistani opposition to drone strikes is not as widespread as previously claimed, and that the US government should take steps to convert Pakistanis to the official US view on drone strikes: [The US] must draw to its side the large swath of the population that doesn’t even know about the program. This may mean using radio, non-cable TV (including local Pakistani networks) or even hyper-local media such as SMS -- and it means doing so in Urdu and perhaps other vernacular languages. This is some of the most propagandistic writing in support of President Barack Obama’s targeted kill lists to date. That was T.

DOJ: Our Delayed Notice Doesn’t Mean You Can Withdraw Your Plea DOJ has now given a third defendant, Agron Hasbajrami, notice his prosecution was “derived from” Section 702. The government submits this letter to supplement the government’s original Foreign Intelligence Surveillance Act (“FISA”) notice, which was filed on September 13, 2011. The original FISA notice advised you that the government intended to offer into evidence, or otherwise use or disclose “information obtained or derived from electronic surveillance and physical searches conducted pursuant to the Foreign Intelligence Surveillance Act of 1978 (‘FISA’), as amended, 50 U.S.C. §§ 1801-1812 and 1821-1829.” (Dckt. # 9). Oops! “Was aggrieved.” There’s just one problem: Hasbajrami already took a plea deal, pleading guilty to material support for terrorism on April 12, 2012. And DOJ says he can’t take it back. Still. No wonder John Carlin umed and ahed so much today.