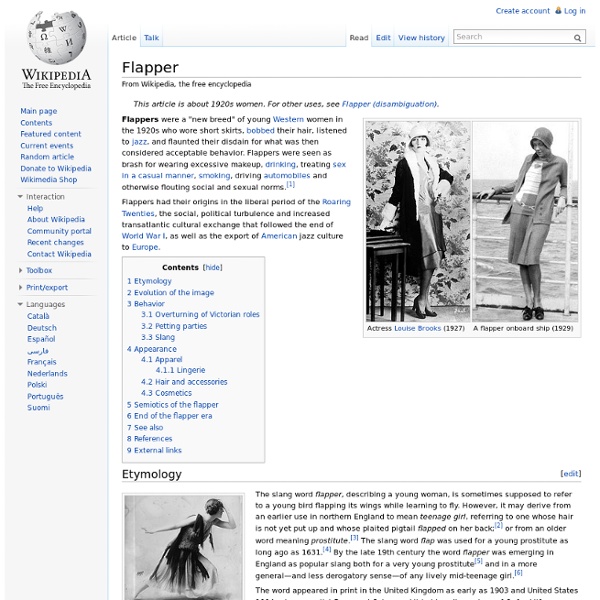 A flapper onboard ship (1929) Flappers were a "new breed" of young Western women in the 1920s who wore short skirts, bobbed their hair, listened to jazz, and flaunted their disdain for what was then considered acceptable behavior. Flappers were seen as brash for wearing excessive makeup, drinking, treating sex in a casual manner, smoking, driving automobiles, and otherwise flouting social and sexual norms.[1] Flappers had their origins in the liberal period of the Roaring Twenties, the social, political turbulence and increased transatlantic cultural exchange that followed the end of World War I, as well as the export of American jazz culture to Europe. Etymology[edit] The slang word flapper, describing a young woman, is sometimes supposed to refer to a young bird flapping its wings while learning to fly. By 1920, the term had taken on the full meaning of the flapper generation style and attitudes. Evolution of the image[edit] Writers in the United States such as F. Behavior[edit]

Roaring Twenties The Roaring Twenties is a term sometimes used to refer to the 1920s in the United States, Canada, and the United Kingdom, characterizing the decade's distinctive cultural edge in New York City, Chicago, Paris, Berlin, London, Los Angeles and many other major cities during a period of sustained economic prosperity. French speakers called it the "années folles" ("Crazy Years"),[1] emphasizing the era's social, artistic, and cultural dynamism. Normalcy returned to politics in the wake of hyper-emotional patriotism after World War I, jazz music blossomed, the flapper redefined modern womanhood, and Art Deco peaked. Economically, the era saw the large-scale diffusion and use of automobiles, telephones, motion pictures, and electricity, unprecedented industrial growth, accelerated consumer demand and aspirations, and significant changes in lifestyle and culture. Economy[edit] Chart 1: USA GDP annual pattern and long-term trend, 1920-40, in billions of constant dollars[4] Demobilization[edit]

Jazz Age The Jazz Age was a feature of the 1920s (ending with The Great Depression) when jazz music and dance became popular. This occurred particularly in the United States, but also in Britain, France and elsewhere. Jazz played a significant part in wider cultural changes during the period, and its influence on pop culture continued long afterwards. Jazz music originated mainly in New Orleans, and is/was a fusion of African and European music. The Jazz Age is often referred to in conjunction with the phenomenon referred to as the Roaring Twenties. The term "Jazz Age" was coined by F. African Americans[edit] The birth of jazz music is generally credited to African Americans,[1] but expanded and over time was modified to become socially acceptable to middle-class white Americans. Radio[edit] The spread of jazz was encouraged by the introduction of large-scale radio broadcasts in 1922. Youth[edit] Women[edit] Classical music[edit] Jazz today[edit] See also[edit] Roaring Twenties Notes[edit]

Speakeasy New York's 21 Club was a Prohibition-era speakeasy. A speakeasy, also called a blind pig or blind tiger, is an establishment that illegally sells alcoholic beverages. Such establishments came into prominence in the United States during the Prohibition era (1920–1933, longer in some states). During that time, the sale, manufacture, and transportation (bootlegging) of alcoholic beverages was illegal throughout the United States.[1] Speakeasies largely disappeared after Prohibition was ended in 1933, and the term is now used to describe some retro style bars. Etymology[edit] According to an 1889 newspaper, "Unlicensed saloons in Pennsylvania are known as 'speak-easies' Different names for speakeasies were created. In desperate cases it has to betake itself to the exhibition of Greenland pigs and other curious animals, charging 25 cents for a sight of the pig and throwing in a gin cocktail gratuitously.[7] History[edit] Another change that occurred was more participation from women. Jump up ^ 13.

Rum-running Rum-running, or bootlegging, is the illegal business of transporting (smuggling) alcoholic beverages where such transportation is forbidden by law. Smuggling is usually done to circumvent taxation or prohibition laws within a particular jurisdiction. The term rum-running is more commonly applied to smuggling over water; bootlegging is applied to smuggling over land. History[edit] Rum runner schoonerKirk and Sweeney with contraband stacked on deck One of the most famous periods of rum-running began in the United States with the 18th Amendment (ratified January 16, 1919) and the Volstead Act (passed October 28, 1919). At first, there was much action on the seas, but after several months the Coast Guard began reporting decreasing smuggling activity. With the start of Prohibition Captain McCoy began bringing rum from Bimini and the rest of the Bahamas into south Florida through Government Cut. The Rum Row[edit] Rum Row wasn't the only front for the Coast Guard. The ships[edit] See also[edit]

The Roaring Twenties Harlem gangs from the 1920s and 1930s — A Brief History BY Walter A. Bell Very little is known about organized black gangs that operated in , during the Prohibition and Depression years. Almost all organized crime in during that time was run by Italian, Jewish, and Irish gangsters. A few loosely run black crime factions did exist and primarily concentrated on policy and lottery gambling, prostitution and drugs. These are the true stories of a time, a place and a people who lived during one of our countrys darkest and most socially flamboyant periods. William Bojangles Robinson s troops were finally back from the war to end all wars. s returning black soldiers were sure they now would be treated as equals, having bravely proved their worth by serving honorably overseas. Lenox Avenue in Harlem, 1927 The housing situation grew worse. Times were hard for black people, not only in but throughout the nation.

The United States Turns Inward: the 1920s and 1930s After its participation in the conflagration then known as the Great War, the American nation was ready to turn inward and concentrate on domestic affairs (a "return to normalcy," as 1920 presidential candidate Warren Harding called it). Private concerns preoccupied most Americans during the 1920s until the Great Depression of the next decade, when increasing numbers turned, in their collective misfortune, to government for solutions to economic problems that challenged the very basis of U.S. capitalistic society. The 1920s: Decade of Optimism. Traditional WASP (white, Anglo-Saxon Protestant) America fought the new ways. New ideas, however, continued to inundate the country, and optimism remained high. Three Republican presidents occupied the White House during the 1920s. The 1930s: Decade of Depression. A new era commenced in American history, one in which a social democratic order similar to that of Western European countries appeared. Recovery was Roosevelt's first task.

Prohibition Prohibition of alcohol, often referred to simply as prohibition, is the legal act of prohibiting the manufacture, storage, transportation and sale of alcohol and alcoholic beverages. The term can also apply to the periods in the histories of the countries during which the prohibition of alcohol was enforced. History[edit] The Drunkard's Progress: A lithograph by Nathaniel Currier supporting the temperance movement, January 1846 The earliest records of prohibition of alcohol date back to the Xia Dynasty (ca. 2070 BC–ca. 1600 BC) in China. In the early twentieth century, much of the impetus for the prohibition movement in the Nordic countries and North America came from moralistic convictions of pietistic Protestants.[2] Prohibition movements in the West coincided with the advent of women's suffrage, with newly empowered women as part of the political process strongly supporting policies that curbed alcohol consumption.[3][4] Asia[edit] Bangladesh[edit] Brunei[edit] India[edit] Maldives[edit]