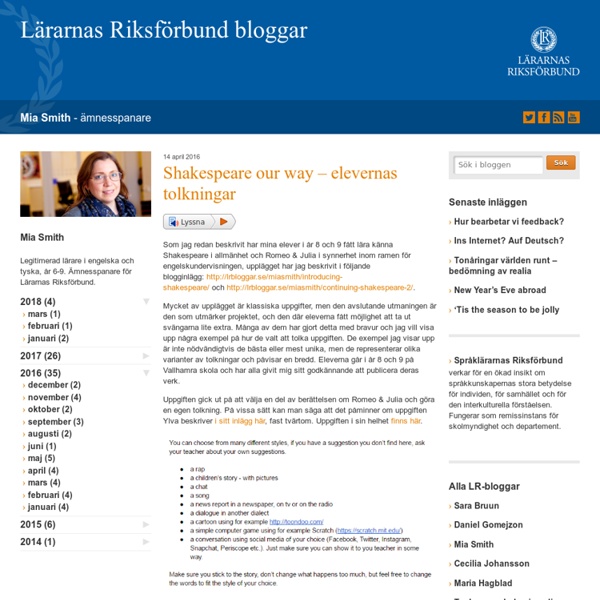 The Heroes Unit: Subunit 1 – Qualities of a Hero and the Heroic Journey – The... This is a mammoth of a blog post, so I am going to split it up into three parts for your viewing pleasure.This unit is on Heroes with three subunits – fictional heroes, modern day heroes and personal heroes. You can go through it in about 2 -3 months. Do me a favour. Ask your students who their heroes are.

The secret connection between Cervantes and Shakespeare As if neither man wanted to live in a world without the other, Miguel de Cervantes and William Shakespeare died on the same date in 1616. Or not exactly. They didn't actually succumb on the same day. Shakespeare and Cervantes probably died or were buried almost a fortnight apart, mostly because Catholic Spain preferred the Gregorian calendar, which ran 11 days behind Protestant England's. Still, each writer died around what he thought of as April 23, so April 23 it is.

Shakespeare Solos: watch the first six films Adrian Lester, Hamlet ‘To be or not to be’ Adrian Lester performs Hamlet’s soliloquy from act III, scene 1, in which the prince reflects on mortality and considers taking his own life. Joanna Vanderham, Romeo and Juliet ‘The mask of night is on my face’ Joanna Vanderham speaks Juliet’s monologue from the balcony scene in which she insists that her devotion to Romeo is true even if it has been a whirlwind romance.

US Presidential Election ⋆ Intermediate, Themes Background 2016 presidential candidates Basic details of each candidate’s backgroundWhere the Candidates Stand on 2016’s Biggest IssuesWhat happens when … and how The important dates, Feb-Nov, listed and explained2016 Primary Results and Calendar Quickview of the results so far by NYTimes Warm-up What do kids want in a president? (1:20) Kids talk about what kind of person they think the next president should be like. Who was William Shakespeare? William Shakespeare is known across the world as the writer of plays such as Romeo and Juliet and Hamlet, and as one of the most famous British people ever. Sometimes known simply as ‘the Bard’, he lived over four hundred years ago – not bad for the son of a man who made a living from making gloves. Part of the fascination is that despite being so well-known we don’t actually have much information about him; even his name is spelt differently each time it appears, ranging from ‘Shak-peare’ to ‘Shaksper’.

Origins of Shakespeare Although he&#xa0;did&#xa0;not&#xa0;invent&#xa0;the sonnet, he did make it popular! William Shakespeare is believed to have influenced the English language more than any other writer in history, popularizing terms and phrases that still appear in everyday conversation and text. Examples include the words “fashionable” (“Troilus and Cressida”), “sanctimonious” (“Measure for Measure”), “eyeball” (“A Midsummer Night’s Dream”) and “lackluster” (“As You Like It”); and the expressions “foregone conclusion” (“Othello”), “in a pickle” (“The Tempest”), “wild goose chase” (“Romeo and Juliet”) and “one fell swoop” (“Macbeth”). He is also credited with inventing the given names Olivia, Miranda, Jessica and Cordelia, which have become common over the years﻿. Hero Subunit 3: Three Paragraph Essay on a Personal Hero – The Canswedian Eng... Subunit 3: Three paragraph essay on a personal hero. Ask the students to think about their personal hero, or someone they look up to. It could be a family member, singer, someone from history, whoever…It is mindblowing how many will say they don’t know. If they don’t have one – they can research.