SONNET 130 UNSCRAMBLE. Royal Shakespeare Company. Shakespeare’s Work. A Theme Page about Shakespeare’s Plays and Language for intermediate level students, (A2.2 – B1), year 8-9 and above in Swedish Compulsory School. 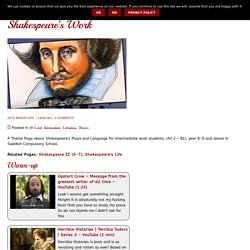 I’m Ben Crystal, an actor and stage producer of Shakespeare’s plays. I’m here to find out why this small town in the centre of England produced one of the country’s best-ever playwrights, and why people are still visiting Stratford-upon-Avon 400 years after Shakespeare’s death. Actor and actress: When shall we three meet again In thunder, lightning or in rain? When the hurly burly’s done, When the battle’s lost and won. Jana Kukla: I just love Shakespeare, always have, as a little kid too. Yichun Chao: Romeo and Juliet – it was a love story and it was very romantic.

Rose Hackl: He has the ability to show into the heart, into the soul of the human beings. Rand and Geraldine: They are kind of cross-cultural, you know. The words you can see in black and white are actually written on his grave. Ben: They seem to be in a big, nice house. Teflreflections: Shakespeare boom - a reading lesson. In one of my previous posts I blogged about using literature in EFL and gave an example lesson plan based around Hamlet's soliloquy. 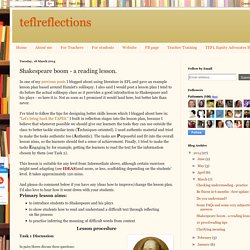 I also said I would post a lesson plan I tend to do before the actual soliloquy class as it provides a good introduction to Shakespeare and his plays - so here it is. Not as soon as I promised it would land here, but better late than never. I've tried to follow the tips for designing better skills lesson which I blogged about here in: "Let's bring back the TAPES. " I built in reflection stages into the lesson plan, because I believe that whenever possible we should give our learners the tools they can use outside the class to better tackle similar texts (Techniques-oriented).

I used authentic material and tried to make the tasks authentic too (Authentic). This lesson is suitable for any level from Intermediate above, although certain exercises might need adapting (see IDEAS)and more, or less, scaffolding depending on the students' level. Task 1 Discussion. Shakespeare In The Classroom - Pudding Lane Productions, Crytek Off The Map. 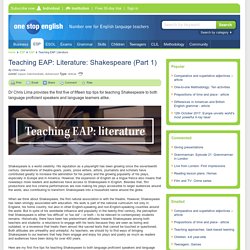 Shakespeare is a world celebrity. His reputation as a playwright has been growing since the seventeenth century. Generations of theatre-goers, poets, prose writers, artists, journalists and scholars have contributed greatly to increase the admiration for his poetry and the growing popularity of his plays, especially in Europe and in America. However, the expansion of English as a lingua franca also means that nowadays more readers and audiences have access to Shakespeare in English. When we think about Shakespeare, the first natural association is with the theatre. "Why Shakespeare? Because it's 2016" John Bolton: The power of imagination - Lessons from Shakespeare. Everyday, more fool you, you are quoting Shakespeare. 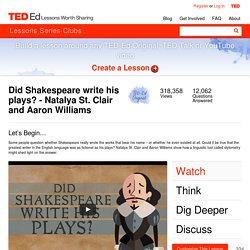 A great reference is Slate’s episode, How Mathematicians Determine Authorship. Most claims in the video are based on a study by Craig and Kinney, Shakespeare, Computers, and the Mystery of Authorship. Teflreflections: Shakespeare boom - a reading lesson. The 7 Most Savage Moments in Shakespeare. 17 Shakespeare Plays Summed Up by a Single Taylor Swift Lyric. Shakespeare is everywhere. 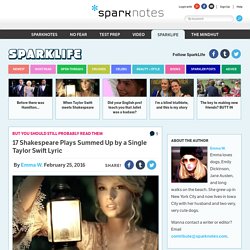 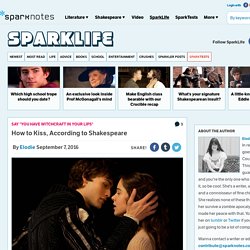 Let’s not dive too deeply into the haunted crypt that is my love life, but suffice it to say I have kissed a person or two in my time. No one's good at it right away; it takes practice. Learning to kiss is like learning to ride a bike. You have no clue what you’re doing, you’re nervous, your hands are sweaty, and the whole time you’re just hoping for the best while hurtling through the unknowable void. But if there’s anyone who can teach the masses how the navigate the forbidden and inexplicable witchcraft also known as "kissing," it’s William Shakespeare.

When you’re going in for the kiss but you panic at the last minute: "I…kiss the tender inward of thy hand. " When you're trying to resist the urge to say "thank you" after they kiss you (I mean, you've seen THAT episode of Gilmore Girls), but you’re not sure what else to say so instead you go with: "What's done, is done. " When you have no idea how to flirt: "You have witchcraft in your lips. " Monthly news lesson: Shakespeare’s 400th anniversary. 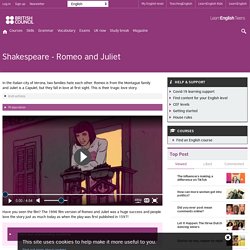 Two families, the Montagues and the Capulets, hate each other so much that they fight on the street whenever they meet. One of these families, the Capulets, organises a big party so that they can introduce their daughter Juliet to a rich nobleman, Count Paris, who has asked to marry her. Juliet is nearly 14, and her parents are keen for her to marry soon. Romeo is the son of the Montague family, and is also about 14. Romeo and his friends decide that it would be exciting to go to the Capulets’ party too.

That night, at the party, Romeo meets Juliet, and they fall in love at first sight. Juliet’s cousin, Tybalt, gets angry very easily. Meanwhile, the Capulets decide that Juliet must marry Count Paris immediately. When the guests arrive for Juliet’s wedding the next day, Juliet’s lifeless body is discovered. When the Capulets and Montagues discover both their children dead, they are united in their sadness. A painting of a map of the plays of Shakespeare. Shakespeare and %20his family lesson plan. Shakespeare is everywhere: Christopher Gaze at TEDxVancouver. William Shakespeare: All the world's a secret admirer. 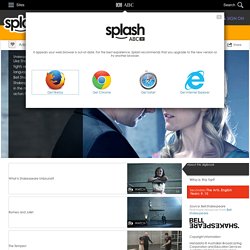 Splash and Bell Shakespeare bring you some of Shakespeare's most famous scenes set in the modern day. Then meet the actors to hear their interpretations. About this digibook. What accent did Shakespeare have? - Teaching English – British Council. The life of Shakespeare. This lesson is about Shakespeare’s life. 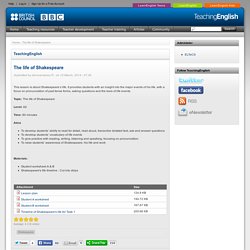 It provides students with an insight into the major events of his life, with a focus on pronunciation of past tense forms, asking questions and the lexis of life events. Topic: The life of Shakespeare Level: A2 Time: 80 minutes Aims To develop students’ ability to read for detail, read aloud, transcribe dictated text, ask and answer questionsTo develop students’ vocabulary of life eventsTo give practice with reading, writing, listening and speaking, focusing on pronunciationTo raise students’ awareness of Shakespeare, his life and work. The First Folio: A 400 Year Obsession. 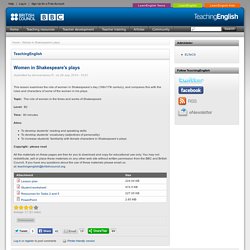 Medieval literature expert Rémy Cordonnier was searching for books to use in a planned exhibition of “Anglo-Saxon” authors when he stumbled across the 1623 tome in September. Cordonnier, a librarian, said that at first he had no idea that the battered book in his hands was a treasure. “It had been wrongly identified in our catalogue as a book of Shakespeare plays most likely dating from the 18th century,” he said on Tuesday. “I didn’t instantly recognise it as a book of value. Cordonnier contacted one of the world’s most eminent authorities on Shakespeare, Prof Eric Rasmussen of the University of Nevada in Reno, who – as luck would have it – was in London working at the British Library. Shakespeare's Insult Generator. David Crystal on English Idioms by Shakespeare. Shakespeare: Legacy and Modern Interpretations. Shakespeare: Original pronunciation. The Shakespeare Enigma. Shakespeare Lesson – A Shakespeare Lesson for Students new to the Bard.

Teaching Shakespeare - Top Tips for Teaching Shakespeare. Teaching Shakespeare can be one of the most challenging, yet enlightening jobs ever because there are always new techniques to try and fresh perspectives to discover. There is nothing more satisfying than when you get a student to engage with Shakespeare because you know that experience will stay with them for the rest of their life. However, Shakespeare gets an undeservedly bad reputation in schools.

I think that those with negative feelings about Shakespeare are more vocal than students with positive experiences. No Fear Shakespeare. Duncan Fewins works with the Royal Shakespeare Company to improve the quality of Shakespeare education in the UK. He is also a drama lecturer and programme manager at Stratford-upon-Avon College. Here, he speaks to About.com about overcoming your fear of Shakespeare. About.com: What do you aim to achieve in your workshops at the Royal Shakespeare Company and in your lecturing career at Stratford-upon-Avon College? Duncan Fewins: Obviously, these texts were written 400 years ago and can sometimes appear intimidating, so my main aim is to make them accessible and alive. I think that there’s still a stigma attached to classical texts: people are still in reverence of Shakespeare, and perhaps even a little afraid. About.com: Is this easy to achieve, or does it require training?

Duncan Fewins: I think it does require training and skill – and that sounds arrogant. Shakespeare's Birthplace - A Tour of Shakespeare’s Birthplace in Stratford upon Avon.