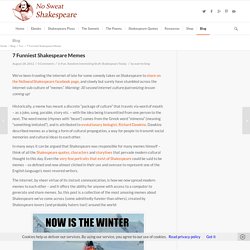 Warning: 30 second internet culture/patronizing lesson coming up! Historically, a meme has meant a discrete “package of culture” that travels via word of mouth – as a joke, song, parable, story etc. – with the idea being transmitted from one person to the next. The word meme (rhymes with “beam”) comes from the Greek word “mimema” (meaning “something imitated”), and is attributed to evolutionary biologist, Richard Dawkins. Dawkins described memes as a being a form of cultural propogation, a way for people to transmit social memories and cultural ideas to each other.

In many ways it can be argued that Shakespeare was responsible for many memes himself – think of all the Shakespeare quotes, characters and storylines that pervade modern cultural thought to this day. Juliet hits facebook. Analysis of Shakespeare's Sonnets and Paraphrase in Modern English. Shakespeare's Sonnets The Sonnets are Shakespeare's most popular works, and a few of them, such as Sonnet 18 (Shall I compare thee to a summer's day), Sonnet 116 (Let me not to the marriage of true minds), and Sonnet 73 (That time of year thou mayst in me behold), have become the most widely-read poems in all of English literature. 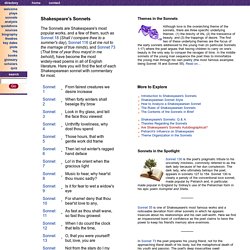 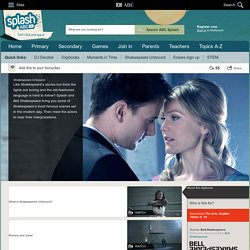 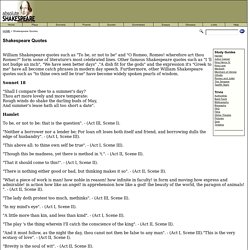 Wherefore art thou Romeo? " form some of literature's most celebrated lines. Other famous Shakespeare quotes such as "I 'll not budge an inch", "We have seen better days" ,"A dish fit for the gods" and the expression it's "Greek to me" have all become catch phrases in modern day speech. Furthermore, other William Shakespeare quotes such as "to thine own self be true" have become widely spoken pearls of wisdom. Sonnet 18 "Shall I compare thee to a summer's day? Hamlet To be, or not to be: that is the question". - (Act III, Scene I). "Neither a borrower nor a lender be; For loan oft loses both itself and friend, and borrowing dulls the edge of husbandry". - (Act I, Scene III). "This above all: to thine own self be true". - (Act I, Scene III). "Though this be madness, yet there is method in 't. ". - (Act II, Scene II). 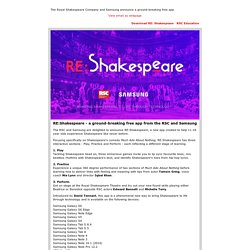 Introduced by David Tennant, this app is a phenomenal new way to bring Shakespeare to life through technology and is available on the following devices: It is completely free to download from the Google Play Store. Shakespeare Documented. Shakespeare: Original pronunciation. Macbeth l Historical Background l Elizabethan World Order. Elizabethan World Order This theory, based on the Greek philosopher Aristotle’s concept of the universe, was of great importance to Shakespeare’s contemporaries and was used by him in developing events in his plays. 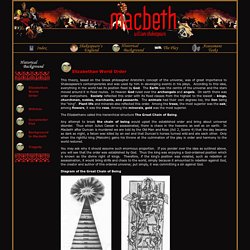 According to this idea, everything in the world had its position fixed by God. The Earth was the centre of the universe and the stars moved around it in fixed routes. In Heaven God ruled over the archangels and angels. On earth there was order everywhere. Society reflected this order with its fixed classes from the highest to the lowest – kings, churchmen, nobles, merchants, and peasants. High position (such as a King, Nobleman or General) could expect (owing to a change in fortune) to suffer some disappointment or “fall”.