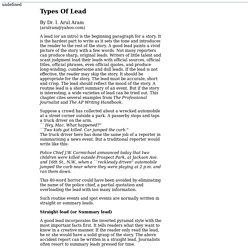 I. Arul Aram (arulram@yahoo.com) A lead (or an intro) is the beginning paragraph for a story. It is the hardest part to write as it sets the tone and introduces the reader to the rest of the story. A good lead paints a vivid picture of the story with a few words. Suppose a crowd has collected about a wrecked automobile at a street corner outside a park. Police Chief J.W. This 40-word horror could have been avoided by eliminating the name of the police chief, a partial quotation and overloading the lead with too many information. Such routine events and spot events are normally written in straight or summary leads. Straight lead (or Summary lead) A good lead incorporates the inverted pyramid style with the most important facts first. Two children at play were killed today when a sports car jumped the curb outside Prospect Park and ran them down. Police Chief J.W. Punch lead is a variation of summary lead. Unfolding a bizarre story, police said . . .

Descriptive lead Quotation lead Mrs. Types & Examples of Leads. William Shakespeare - Poet, Playwright. Who Was William Shakespeare? William Shakespeare (baptized on April 26, 1564 to April 23, 1616) was an English playwright, actor and poet and is often called England’s national poet. Born in Stratford-upon-Avon, England, he was an important member of the Lord Chamberlain’s Men company of theatrical players from roughly 1594 onward. Written records give little indication of the way in which Shakespeare’s professional life molded his artistry. All that can be deduced is that, in his 20 years as a playwright, Shakespeare wrote plays that capture the complete range of human emotion and conflict. Known throughout the world, the works of William Shakespeare have been performed in countless hamlets, villages, cities and metropolises for more than 400 years.

William Shakespeare: Plays Early Works: Histories and Comedies With the exception of the tragic love story Romeo and Juliet, William Shakespeare's first plays were mostly histories. Works after 1600: Tragedies and Tragicomedies Family. WILLIAM SHAKESPEARE. William Shakespeare - Google 検索. Introductory Paragraphs. Students are told from the first time they receive instruction in English composition that their introductory paragraphs should accomplish two tasks: They should get the reader's interest so that he or she will want to read more. 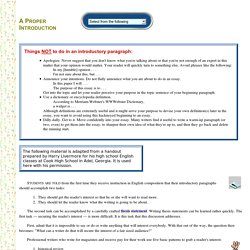 They should let the reader know what the writing is going to be about. The second task can be accomplished by a carefully crafted thesis statement. Writing thesis statements can be learned rather quickly. The first task — securing the reader's interest — is more difficult. First, admit that it is impossible to say or do or write anything that will interest everybody. Professional writers who write for magazines and receive pay for their work use five basic patterns to grab a reader's interest: historical review anecdotal surprising statement famous person declarative What follows is an explanation of each of these patterns with examples from real magazine articles to illustrate the explanations.

The victory brought pure elation and joy. Definition of Controversy by Merriam-Webster. The Shakespeare Authorship Controversy: The Case Summarily Stated. Who wrote the works of Shakespeare? 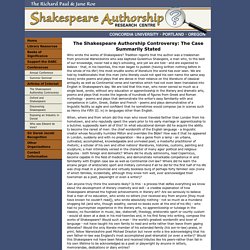 Tradition reports that the author was a tradesman from provincial Warwickshire who was baptized Gulielmus Shakspere, a man who, to the best of our knowledge, never had a day's schooling, and yet we are told - and are expected to believe - that, in his twenties, this man began to publish (having written nothing before in the whole of his life!) The most erudite works of literature the world has ever seen. We are told by traditionalists that this man (who literally could not spell his own name the same way twice) wrote poems and plays that are dense in their reliance on the literature of classical antiquity as well as Continental verse and narrative which had not even been translated into English in Shakespeare's day. When, where and from whom did this man who never traveled farther than London from his hometown, and who reputedly spent the years prior to his early marriage in apprenticeship to a butcher, supposedly learn all of this? Literature. Shakespeare.

The Shakespeare Authorship Controversy. By Lee Jamieson Could William Shakespeare, the country bumpkin from Stratford-upon-Avon, really be the man behind the World’s greatest ever literary texts? 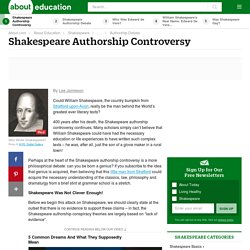 If you subscribe to the idea that genius is acquired, then believing that this little man from Stratford could acquire the necessary understanding of the classics, law, philosophy and dramaturgy from a brief stint at grammar school is a stretch. Shakespeare Was Not Clever Enough! Continue reading below our video Play Video Enter Edward de Vere Marlowe and Bacon. The Shakespeare Authorship Controversy. 4 Shakespeare controversies. Sign Up for Our free email newsletters William Shakespeare may be widely seen as the greatest writer of all time, but he can't seem to get a break from critics. 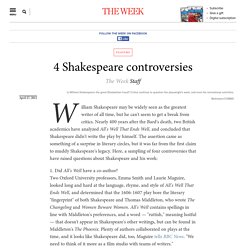 Nearly 400 years after the Bard's death, two British academics have analyzed All's Well That Ends Well, and concluded that Shakespeare didn't write the play by himself. The assertion came as something of a surprise in literary circles, but it was far from the first claim to muddy Shakespeare's legacy. Here, a sampling of four controversies that have raised questions about Shakespeare and his work: 1. 2. 3. 4. Shakespeare.