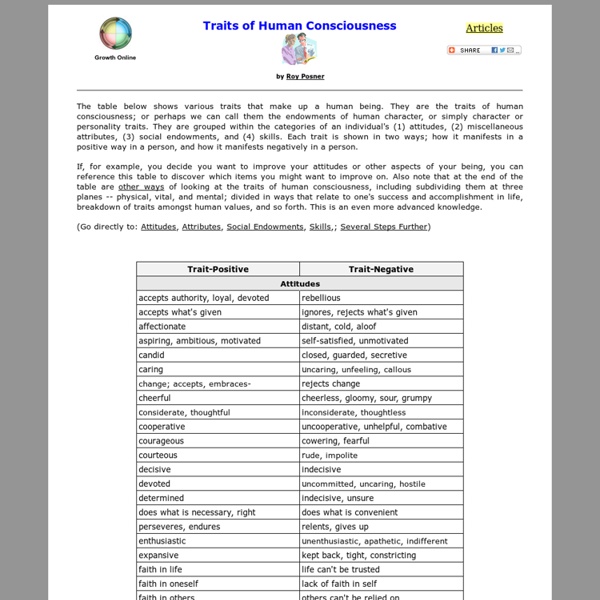 Several Steps Further: Aside from the listing above, traits of human consciousness can be viewed from a number of other perspectives. Here are several: Traits Organized from Psychological (Inner-oriented) to Social (Outer-oriented) Human personality/character traits can be divided by those that are inner/psychological; and those that are outer-oriented/social. (They can then be further divided positively and negatively.) Traits Expressing in the Vertical Scale of Human Consciousness (Physical, Vital, Mental) The individual human expresses exits at three fundamental planes or levels of being -- mental, vital, and physical. ARTICLE: Positive and Negative Human Traits (from a spiritual perspective) New Fundamental Traits/Capacities that Enable Higher Achievement and Personal Growth Spiritual Traits/Capacities that Enable Vastly Higher Achievement, and Personal Growth Negative Traits/Capacities that Retard Achievement & Personal Growth Personal and Society's Values

Dragon Writing Prompts Here’s an extensive list of character traits. You can pick a couple or three to form the basis of a character. Then create a character with the opposite traits to form a friend, enemy, sibling, mentor … ? While there’s a great deal to be said about nature forming our characters, it’s a lot more interesting for a story if there’s a background reason!

D&D Item Clip Art One hassle I've run into, when running various fantasy RPGs, is to deal with the mass accumulation of treasure items - and, for that matter, anything else that is or isn't nailed down that the player-characters might think to take. If the characters decide to "loot", and I recite, aloud, what items they find, sometimes things get lost in the shuffle. Someone writes down an item on his sheet, and then bargaining takes place among the players as to who gets what, and in the midst of it, someone forgets to erase something here or write something there. A useful item disappears into the aether ... or it gets mysteriously multiplied across multiple character sheets.

First practical nanogenerator produces electricity with pinch of the fingers After six years of intensive effort, scientists are reporting development of the first commercially viable nanogenerator, a flexible chip that can use body movements — a finger pinch now en route to a pulse beat in the future — to generate electricity. Speaking here today at the 241st National Meeting & Exposition of the American Chemical Society, they described boosting the device's power output by thousands times and its voltage by 150 times to finally move it out of the lab and toward everyday life. "This development represents a milestone toward producing portable electronics that can be powered by body movements without the use of batteries or electrical outlets," said lead scientist Zhong Lin Wang, Ph.D. "Our nanogenerators are poised to change lives in the future. Their potential is only limited by one's imagination." The latest improvements have resulted in a nanogenerator powerful enough to drive commercial liquid-crystal displays, light-emitting diodes and laser diodes.

Character Chart for Fiction Writers - EpiGuide.com If you're a fiction writer -- whether you're working on a novel, short story, screenplay, television series, play, web series, webserial, or blog-based fiction -- your characters should come alive for your reader or audience. The highly detailed chart below will help writers develop fictional characters who are believable, captivating, and unique. Print this page to complete the form for each main character you create. IMPORTANT: Note that all fields are optional and should be used simply as a guide; character charts should inspire you to think about your character in new ways, rather than constrain your writing. Fill in only as much info as you choose. Have fun getting to know your character! List of superhuman features and abilities in fiction Origins Examples of ways in which a character has gained the ability to generate an effect. Methods

Character Name Generator Ever get stuck for names of NPCs your player characters run into that you never expected to provide them? Here?s a fast and easy way to have many monikers on hand when Rodar the fighter wants to know the name of the brash drunk challenging him to a fight in the tavern, or the name of the shy barmaid over whom they?re fighting. Literary Theory and Schools of Criticism Summary: This resource will help you begin the process of understanding literary theory and schools of criticism and how they are used in the academy. Contributors:Allen Brizee, J. Case TompkinsLast Edited: 2012-05-14 12:46:21 Introduction A very basic way of thinking about literary theory is that these ideas act as different lenses critics use to view and talk about art, literature, and even culture.

Creative Writing Prompts: Secrets and Lies for Your Characters Nothing is better (or more fun for the writer) than a story-relevant secret or lie. Give some dilemma beneath the surface story to give your character depth, add suspense and tension, and keep your reader turning the pages. You can drop hints throughout your writing and when the reveal comes—you will surprise, shock, and delight your reader. Creating a character with a strong internal conflict, secret, or burden makes for one compelling read! (To see more on writing a compelling protagonist, check out The Compelling Protagonist Part 1 and Compelling Protagonist Part 2.)

The 7 Commandments All Video Games Should Obey Thou shalt not pad the length of your games. Violators:Mass Effect, The Godfather games, Legend of Zelda: Twilight Princess, Elder Scrolls: Oblivion IV, ah, fuck it. Any open-world game this generation. Black Death Spread of the Black Death in Europe (1346–53) The Black Death is thought to have originated in the arid plains of central Asia, where it then travelled along the Silk Road, reaching the Crimea by 1343.[6] From there, it was most likely carried by Oriental rat fleas living on the black rats that were regular passengers on merchant ships. Spreading throughout the Mediterranean and Europe, the Black Death is estimated to have killed 30–60% of Europe's total population.[7] In total, the plague reduced the world population from an estimated 450 million down to 350–375 million in the 14th century.

California Learning Resource Network (CLRN) Are you looking for standards-aligned electronic learning resources to help your students? Here, you can find free Open Educational Resources, reviews of Online Courses, and commercial Electronic Learning Resources. OnlineCourse Reviews Online course reviews aligned to content standards and iNACOL's online course standards. 25 Things You Should Know About Character Previous iterations of the “25 Things” series: 25 Things Every Writer Should Know 25 Things You Should Know About Storytelling And now… Here you’ll find the many things I believe — at this moment!