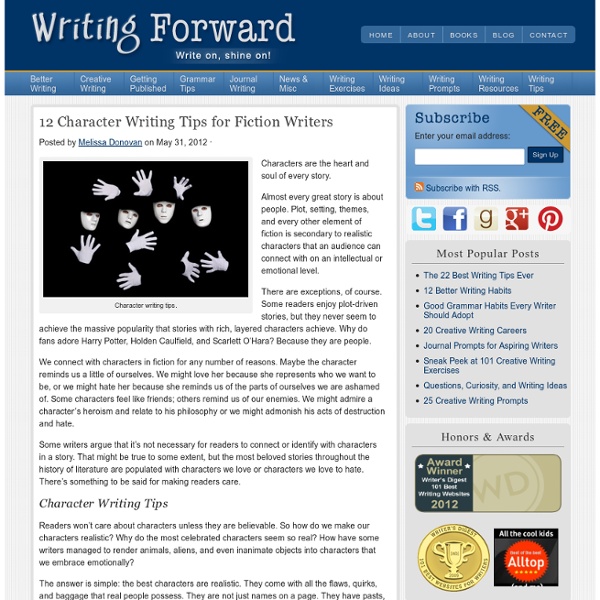 Character writing tips. Characters are the heart and soul of every story. Almost every great story is about people. Plot, setting, themes, and every other element of fiction is secondary to realistic characters that an audience can connect with on an intellectual or emotional level. There are exceptions, of course. Some readers enjoy plot-driven stories, but they never seem to achieve the massive popularity that stories with rich, layered characters achieve. We connect with characters in fiction for any number of reasons. Some writers argue that it’s not necessary for readers to connect or identify with characters in a story. Character Writing Tips Readers won’t care about characters unless they are believable. The answer is simple: the best characters are realistic. Here are 12 character writing tips to help you develop characters that feel like real people: Backstory: we are born a certain way, but our life experiences continually mold and shape us. How do you create characters?

Charting Titans River System For many years, Titan’s thick, methane- and nitrogen-rich atmosphere kept astronomers from seeing what lies beneath. Saturn’s largest moon appeared through telescopes as a hazy orange orb, in contrast to other heavily cratered moons in the solar system. In 2004, the Cassini-Huygens spacecraft — a probe that flies by Titan as it orbits Saturn — penetrated Titan’s haze, providing scientists with their first detailed images of the surface. Radar images revealed an icy terrain carved out over millions of years by rivers of liquid methane, similar to how rivers of water have etched into Earth’s rocky continents. While images of Titan have revealed its present landscape, very little is known about its geologic past. Now researchers at MIT and the University of Tennessee at Knoxville have analyzed images of Titan’s river networks and determined that in some regions, rivers have created surprisingly little erosion. What accounts for a low crater count? Charting a river’s evolution

The Future of Energy is Here! Nanotechnology is the study of manipulating matter on an atomic and molecular scale. Generally, nanotechnology deals with developing materials, devices, or other structures possessing at least one dimension sized from 1 to 100 nanometres (one billionth of a metre). "In the United States around 56% of all the energy we generate - equivalent to $1.68 trillion – is wasted..." Justin Hall-Tipping nanoholdings.com Each day the Flixxy team looks through hundreds of new videos to pull out a few we think are the best.