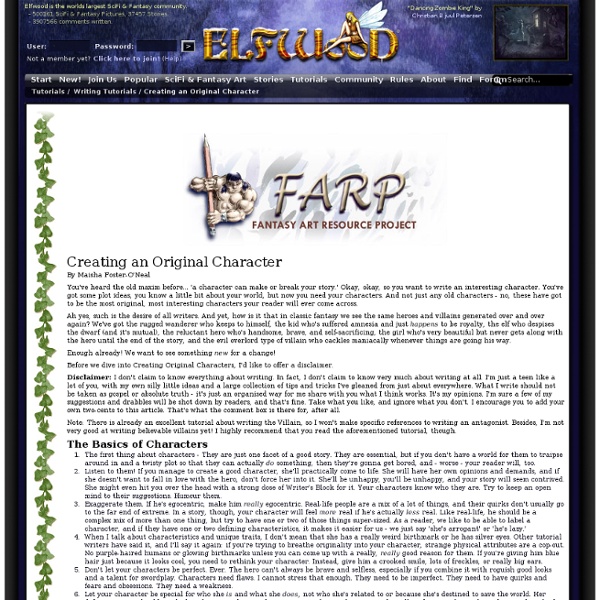 By Maisha Foster-O'Neal You've heard the old maxim before... 'a character can make or break your story.' Okay, okay, so you want to write an interesting character. You've got some plot ideas, you know a little bit about your world, but now you need your characters. And not just any old characters - no, these have got to be the most original, most interesting characters your reader will ever come across. Ah yes, such is the desire of all writers. Enough already! Before we dive into Creating Original Characters, I'd like to offer a disclaimer. Disclaimer: I don't claim to know everything about writing. Note: There is already an excellent tutorial about writing the Villain, so I won't make specific references to writing an antagonist. The Basics of Characters The first thing about characters - They are just one facet of a good story. Character Creation: Little Exercises Open up a phonebook and pick out a name, and write a description of that person based only on their name. A note on Romance

Trade in Ancient Egypt Trade has always been a vital aspect of any civilization whether at the local or international level. However many goods one has, whether as an individual, a community, or a country, there will always be something one lacks and will need to purchase through trade with another. Ancient Egypt was a country rich in many natural resources but still was not self-sufficient and so had to rely on trade for necessary goods and luxuries. Trade began in the Predynastic Period in Egypt (c. 6000 - c. 3150 BCE) and continued through Roman Egypt (30 BCE-646 CE). For most of its history, ancient Egypt's economy operated on a barter system without cash. It was not until the Persian Invasion of 525 BCE that a cash economy was instituted in the country.

Creating a character profile When you get an idea for a short story or a novel you probably get the basic idea of the characters with it. But in order to build believable characters you need more than just a basic idea of them. You need to really them. The easiest way to flesh out a character is with a character profile, so get out a blank sheet of paper and follow the sample profile below. NAME: Put your characters full name - first, last, and any nicknames that he goes by. English 50 Exercises for Story Writers English 50 – Intro to Creative Writing: Exercises for Story Writers Basic Theory: What is a short story?

Ancient Egypt Military Egypt’s defensive advantages were not enough to stop the conquering Hyskos, who invaded at the end of the Middle Kingdom. The Egyptians learned from their defeat and reinvented their army, ushering in a new age of military glory. The Egyptian lands of the Archaic Period, Old Kingdom and Middle Kingdom were not devoid of armies or enemies, however. Nomads raided from the desert; Libyans attacked the Nile delta; and the Nubians threatened the southern border. The Pharaohs responded with force. Fortresses and outposts were built and garrisoned to protect the Nile delta, eastern desert and the southern border.

Plotting Made Easy - The Complications Worksheet Want to create a book readers can't put down? A book you'll itch to write? A protagonist you'll love? An antagonist who will give you shivers? And (simultaneously) the first draft of a synopsis you can send to literary agents? How I Planned My First Novel by Joanna Cravit©2004, Joanna Cravit Last year I wrote my first novel. I knew that it would not be publishable; although I have written dozens of short stories, and lots of nonfiction for my day job, this was my first attempt at a novel-length story, and I resolved to treat it as a practice run. Scholarly publishing is broken. Here’s how to fix it The world of scholarly communication is broken. Giant, corporate publishers with racketeering business practices and profit margins that exceed Apple’s treat life-saving research as a private commodity to be sold at exorbitant profits. Only around 25 per cent of the global corpus of research knowledge is ‘open access’, or accessible to the public for free and without subscription, which is a real impediment to resolving major problems, such as the United Nations’ Sustainable Development Goals. Recently, Springer Nature, one of the largest academic publishers in the world, had to withdraw its European stock market floatation due to a lack of interest.

Writing The Perfect Scene Having trouble making the scenes in your novel work their magic? In this article, I’ll show you how to write the “perfect” scene. Maybe you think it’s impossible to write the perfect scene. After all, who can choose every word perfectly, every thought, every sentence, every paragraph? What does perfection mean, anyway? Honestly, I don’t know. How to Plot and Write a Novel: Plan Your Novel Writing with the Snowflake Method Many novelists mull over story ideas, letting them ripen and develop over time. When the story is ready to be told, instead of just sitting down and starting to type, try the Snowflake Method. This step-by-step way to write a novel begins with essential elements and becomes more detailed with each step. Essential Elements for Novel Structure Snowflakes have a structure which begins with a simple form and adds more elements to create complex patterns. Novelist and physicist Randy Ingermanson created the Snowflake Method to break novel-writing into steps that build on each other in the same way.

Story Values If there is anything in that stands out as the most useful bit of technique you can learn, this is it. Story Values. Everything else in this book is important or useful. But this is a concept that truly revolutionizes your work and sets it above the pack. How to Write a Character Sketch: Learning More About Your Characters’ Motivations and Personalities Regardless of the type of writing you are doing, knowing who your characters are and knowing them well will add greatly to your work. Understanding your characters’ personalities through a character sketch helps you to understand where they are coming from and what motivates them. This, in turn, helps you understand what drives all of the action in your work, and the clearer this is, the easier your audiences will be able to connect with your writing. But how do you go about writing a character sketch? There are numerous ways to go about it. What follows is a look at a few different methods for exploring your characters.

For academics, what matters more: journal prestige or readership? With more than 30,000 academic journals now in circulation, academics can have a hard time figuring out where to submit their work for publication. The decision is made all the more difficult by the sky-high pressure of today’s academic environment—including working toward tenure and trying to secure funding, which can depend on a researcher’s publication record. So, what does a researcher prioritize? According to a new study posted on the bioRxiv preprint server, faculty members say they care most about whether the journal is read by the people they most want to reach—but they think their colleagues care most about journal prestige. Perhaps unsurprisingly, prestige also held more sway for untenured faculty members than for their tenured colleagues.