The Secret History of America The Greatest Conspiracy On Earth 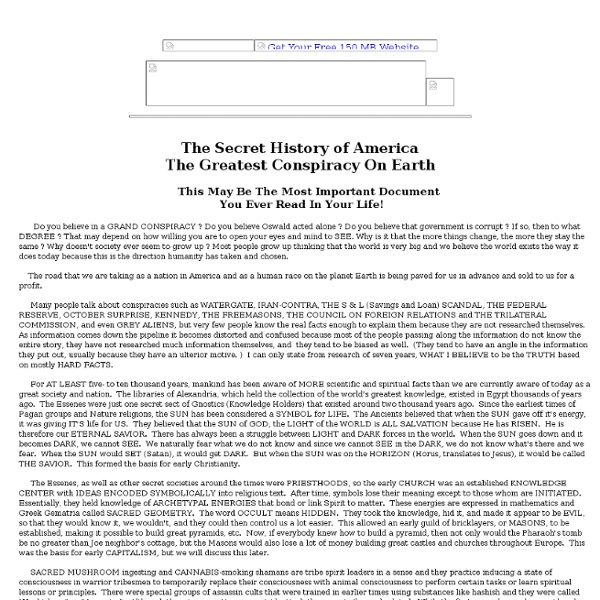 This May Be The Most Important Document You Ever Read In Your Life! Do you believe in a GRAND CONSPIRACY ? Do you believe Oswald acted alone ? Do you believe that government is corrupt ? If so, then to what DEGREE ? That may depend on how willing you are to open your eyes and mind to SEE. The road that we are taking as a nation in America and as a human race on the planet Earth is being paved for us in advance and sold to us for a profit. Many people talk about conspiracies such as WATERGATE, IRAN-CONTRA, THE S & L (Savings and Loan) SCANDAL, THE FEDERAL RESERVE, OCTOBER SURPRISE, KENNEDY, THE FREEMASONS, THE COUNCIL ON FOREIGN RELATIONS and THE TRILATERAL COMMISSION, and even GREY ALIENS, but very few people know the real facts enough to explain them because they are not researched themselves. For AT LEAST five- to ten thousand years, mankind has been aware of MORE scientific and spiritual facts than we are currently aware of today as a great society and nation. Related:  `test 1016

Freud's *The Interpretation of Dreams* Chapter 1, Section D Back to Psych Web Home Page Back to The Interpretation of Dreams Table of Contents D. Why Dreams Are Forgotten After Waking That a dream fades away in the morning is proverbial. The forgetting of dreams is treated in the most detailed manner by Strumpell. In the first place, all those factors which induce forgetfulness in the waking state determine also the forgetting of dreams. * Periodically recurrent dreams have been observed repeatedly. According to Strumpell, other factors, deriving from the relation of the dream to the waking state, are even more effective in causing us to forget our dreams. Finally, we should remember that the fact that most people take but little interest in their dreams is conducive to the forgetting of dreams. It is therefore all the more remarkable, as Strumpell himself observes, that, in spite of all these reasons for forgetting the dream, so many dreams are retained in the memory. Jessen (p. 547) expresses himself in very decided terms: The observations of V.

EPA Reverses Itself on Fluoride For decades, fluoride has been marketed and heralded as essential for good dental hygiene and used in most toothpastes and mouthwashes. In addition, parents have been routinely encouraged to give their kids cavity-fighting fluoride treatments when they visit the dentist. Beginning in the late 1940s, aided by mass industry lead lobbying campaigns, the government encouraged municipal water authorities to add fluoride to their community’s drinking water. The “experts” and the government told us fluoride would strengthen tooth enamel, help prevent tooth decay and is, of course, perfectly safe. “Community water fluoridation is an equitable, cost-effective, and cost-saving method of delivering fluoride to most people,” noted Dr. Click here to find out more. But that was then and this is now. There have always been fluoride critics who questioned the chemical’s safety and challenged the decision to use fluoride in municipal drinking water.

Resilient people more satisfied with life Public release date: 23-May-2012 [ Print | E-mail Share ] [ Close Window ] Contact: Joaquín T LimoneroJoaquin.limonero@uab.cat Universitat Autonoma de Barcelona When confronted with adverse situations such as the loss of a loved one, some people never fully recover from the pain. Others, the majority, pull through and experiment how the intensity of negative emotions (e.g. anxiety, depression) grows dimmer with time until they adapt to the new situation. Researchers at the Basic Psychology Unit at Universitat Autònoma de Barcelona analysed the responses of 254 students from the Faculty of Psychology in different questionnaires. Research data shows that students who are more resilient, 20% of those surveyed, are more satisfied with their lives and are also those who believe they have control over their emotions and their state of mind. "Some of the characteristics of being resilient can be worked on and improved, such as self-esteem and being able to regulate one's emotions.

» Congress To Fund Massive Expansion Of TSA Checkpoints Alex Jones Fears over burgeoning police state increase after passage of NDAA Paul Joseph Watson Infowars.com Friday, December 23, 2011 Congress is set to give the green light on funding for a massive expansion of TSA checkpoints, with the federal agency already responsible for over 9,000 such checkpoints in the last year amidst increased fears America is turning into a police state following the passage of the ‘indefinite detention’ bill. The increase in funding has nothing to do with the TSA’s role in airports – this is about creating 12 more VIPR teams to add the federal agency’s 25 units that are already scattered across the country and responsible for manning checkpoints on highways, in bus and train terminals, at sports events and even high school prom nights. “The TSA’s 25 “viper” teams — for Visible Intermodal Prevention and Response — have run more than 9,300 unannounced checkpoints and other search operations in the last year. This article was posted: Friday, December 23, 2011 at 9:33 am

One Sentence - True stories, told in one sentence. Skype makes chats and user data more available to police The changes to online chats, which are written messages conveyed almost instantaneously between users, result in part from technical upgrades to Skype that were instituted to address outages and other stability issues since Microsoft bought the company last year. Officials of the United States and other countries have long pushed to expand their access to newer forms of communications to resolve an issue that the FBI calls the “going dark” problem. Microsoft has approached the issue with “tremendous sensitivity and a canny awareness of what the issues would be,” said an industry official familiar with Microsoft’s plans, who like several people interviewed for this story spoke on the condition of anonymity because they weren’t authorized to discuss the issue publicly. The changes, which give the authorities access to addresses and credit card numbers, have drawn quiet applause in law enforcement circles but hostility from many activists and analysts. More from The Washington Post:

5 Psych Experiments That Sounded Fun (Until They Started) So you see an ad in the paper from a lab looking for test subjects. They say they want to study the effects of getting high, or eating too much, or having sex. Oh, and they'll pay you to do all of those things. Preposterous, right? The Have Sex For Money Experiment Wanted: a healthy, sexually functional male to have sex with a woman. Yes, that happened, and yes, it was legal. No, he needed to study the humping first hand. For the subjects, it offered all of the benefits of prostitution without the constant threat of genital sores and being locked in a rape dungeon that normally goes along with it. The Harsh Reality First, you found out that these people would be watching you the whole time: That's Masters and Johnson. Putting the "strange" in "sex with a total stranger," partners were matched randomly (if you still think that sounds awesome, the next time you're in line at Burger King, imagine getting randomly matched up for sex with any one of the people around you). This won't help.

33 Conspiracy Theories That Turned Out To Be True Most people can’t resist getting the details on the latest conspiracy theories, no matter how far-fetched they may seem. At the same time, many people quickly denounce any conspiracy theory as untrue … and sometimes as unpatriotic or just plain ridiculous. Lets not forget all of the thousands of conspiracies out of Wall Street like Bernie Madoff and many others to commit fraud and extortion, among many crimes of conspiracy. USA Today reports that over 75% of personal ads in the paper and on craigslist are married couples posing as single for a one night affair. When someone knocks on your door to sell you a set of knives or phone cards, anything for that matter, do they have a profit motive? Conspiracy theory is a term that originally was a neutral descriptor for any claim of civil, criminal or political conspiracy. To many, conspiracy theories are just human nature. I find it extremely odd that the assumption is on thousands of participants in a conspiracy. The Dreyfus Affair: 23.

Women's exercise linked to lower cognitive skill - health - 07 January 2011 WOMEN who habitually take strenuous exercise might be at risk of damaging their cognitive function later in life. Strenuous exercise is known to reduce oestrogen levels in women and girls. This can delay the start of menstruation, and can lead to irregular periods in adult women. Low levels of oestrogen in premenopausal women have been linked to impaired mental function in later life. Mary Tierney at the University of Toronto, Canada, reasoned that strenuous exercise might therefore lead to impaired cognition in later life. The overall benefits of regular exercise are well established, but Tierney says the possible impact of strenuous exercise on cognition should be investigated further to see if it is significant. Subscribe to New Scientist and you'll get: New Scientist magazine delivered every week Unlimited access to all New Scientist online content - a benefit only available to subscribers Great savings from the normal price Subscribe now! More From New Scientist More from the web

Mindfulness meditation training changes brain structure in eight weeks Participating in an 8-week mindfulness meditation program appears to make measurable changes in brain regions associated with memory, sense of self, empathy and stress. In a study that will appear in the January 30 issue of Psychiatry Research: Neuroimaging, a team led by Massachusetts General Hospital (MGH) researchers report the results of their study, the first to document meditation-produced changes over time in the brain's grey matter. "Although the practice of meditation is associated with a sense of peacefulness and physical relaxation, practitioners have long claimed that meditation also provides cognitive and psychological benefits that persist throughout the day," says Sara Lazar, PhD, of the MGH Psychiatric Neuroimaging Research Program, the study's senior author. "This study demonstrates that changes in brain structure may underlie some of these reported improvements and that people are not just feeling better because they are spending time relaxing."

Where is The Mind?: Science gets puzzled and almost admits a non-local mentalscape. This will be the last "home-produced" blog entry for a while [save the short "Everyday Spirituality" which will follow it as a sign-off] . West Virginia beckons tomorrow morning and off I will go to whatever that entails. As I said in one of the commentary responses the other day, I hope that reading two journal runs "cover-to-cover" will bring up a few thoughts worth sharing. This day's entry was inspired by two articles bumped into coincidentally which had scientists puzzling about a holographic universe and a non-local mind. Those scientists would cringe to see how I've taken their sign-posts-on-the-path, but that is their hang-up, not mine. The first of these articles [both from the New Scientist] was "Where in the World is the Mind?" That brings in the second serendipitous article. It reminded me then, also, of a moment when I was able to spend a [too short] time with David Bohm, the famous theoretical physicist.