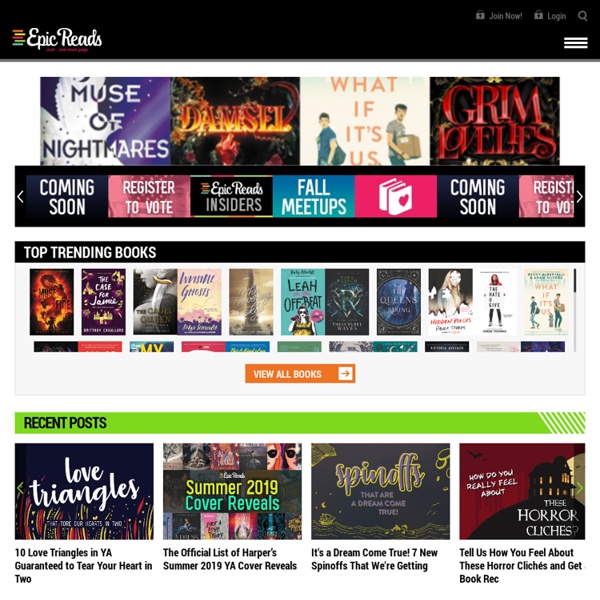 The Horn Book — Publications about books for children and young adults “Nazis. I hate these guys.” August 14, 2017 By Horn Book Preaching to the choir here (Trump voters notwithstanding), but we are disgusted, enraged, and horrified by the violence and hate perpetrated by White Supremacists in Charlottesville, Virginia, and also by what they stand for. The Ultimate YA Bookshelf YALSA's Ultimate Teen Bookshelf (PDF) highlights must-have teen materials for libraries. The Ultimate Teen Bookshelf, with titles listed on this webpage and as a PDF download, was developed in conjunction with the United We Serve initiative. The list includes 50 books, five magazines and five audio books. Subscribers to the YALSA-BK electronic discussion list suggested titles for the Ultimate Teen Bookshelf, which were vetted by Pam Spencer Holley, former YALSA president and author of Quick and Popular Reads for Teens (ALA Editions, 2009), and Judy Sasges, district manager for Sno-Isle Libraries in Marysville, Wash., a 2002 Printz Award committee member and a 2010 YALSA Nonfiction Award committee member.

Open Circle Names 25 Best Books for Kids’ Social and Emotional Learning To celebrate its 25th anniversary, the Open Circle Program at the Wellesley Centers for Women (WCW), a provider of evidence-based social and emotional learning for K–5 kids, has released its list of the top 25 children’s books that connect to kids’ social and emotional development. The chosen books cover a range of important skills, such as self-awareness, self-management, empathy, dealing with conflict, and problem-solving. The Hundred Dresses, by Eleanor Estes, tops the list. “Of the countless books that teachers use to shed light on such issues as friendship, inclusion, empathy, problem solving, or understanding differences, some titles stand out for being especially authentic and memorable,” Open Circle says in its announcement. “Like good friends, the books on this list are potential sources of comfort, validation, laughter, surprises, and new perspectives for children.” 1.

reviews of fiction of interest to LGBTQ teens James Klise, April 2014. Sophomore tennis player Saba Khan is devastated when a fire destroys her family’s West Rogers Park apartment. Saba goes to private school, and the other students and their families rally around her, offering their help to get her back on her feet. The school decides to hold an auction to benefit the Khan family, and in the process, siblings Kevin and Kendra Spoon find artwork in an alley. The art turns out to be lost works by Henry Darger, and is worth at least half a million dollars. Then it disappears.

Best Books 2014: Young Adult June 17, 2015 School Library Journal The world's largest reviewer of books, multimedia, and technology for children and teens Best Books 2014: Young Adult Recent Posts The Hub - Today’s Quick Picks nominees are filled with thrills and chills. Breaking by Danielle RollinsBloomsbury USA Children’sPublication Date: June 6, 2017ISBN: 9781619637405 Charlotte has never been a top student at her prestigious, expensive, academically rigorous boarding school. Her best friends Ariel and Devon, however, are true Weston Prep material – freakishly smart and incredibly talented at a multitude of things. Understandably, Charlotte is reeling after they both commit suicide within weeks of each other – they were pretty much her only real family.

15 Online Tools for Students and Teachers to Create Presentations Online learning solutions like those offered by Creedo allow instructors to pose questions to students and instantly evaluate results. If presentations are not done right, they could lead to boring, mind wandering time wasters, where the message doesn’t really get through properly. But, help is available in the form of great online tools that’ll help you create engaging presentations, whether you’re a student or a teacher. Keep their attention, get your message across, and dazzle them with eye catching presentations using these online resources. The Inspiring Stories Behind 15 Classic Novels  According to Jack London, "You can't wait for inspiration, you have to go after it with a club." London himself took the inspiration for The Call of the Wild (1903) from his time spent living in Canada and Alaska during the Klondike Gold Rush when high-quality sled dogs -- like those that feature in the book -- were in impossibly high demand. The stories and inspirations behind fifteen more of literature's most memorable titles are explained here: Anna Karenina (1877), Leo Tolstoy In January 1872, the death of a 35-year-old woman was reported in the Russian press: smartly dressed and carrying a bag containing a change of clothes, the girl had thrown herself under a freight train at Yasenki Station outside Moscow.

YALSA Book and Media Awards and Lists for Libraries *YALSA has launched the new Teen Book Finder Database, which is a one-stop shop for finding selected lists and award winners. Users can search this free resource by award, list name, year, author, genre and more, as well as print customizable lists. This new resource will replace the individual award and list web pages currently on YALSA’s site that are not searchable and that are organized only by year. Awards & Seals | Selected Lists I Teen Book Finder app & database I Committee Contacts | Additional Resources