How People Learn to Become Resilient 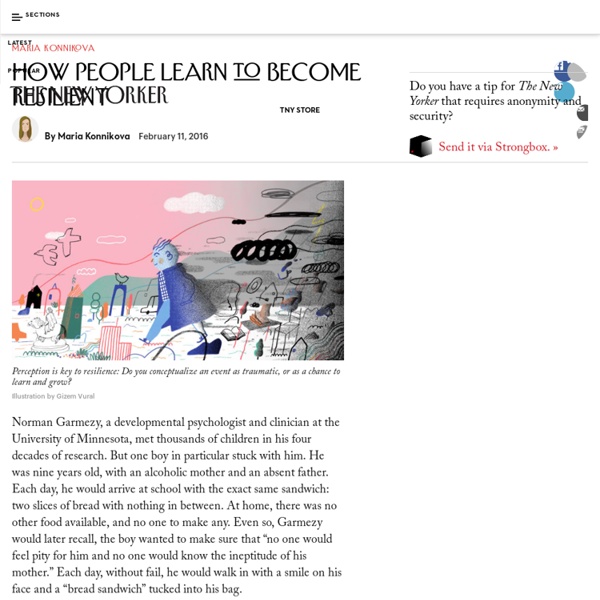 Norman Garmezy, a developmental psychologist and clinician at the University of Minnesota, met thousands of children in his four decades of research. But one boy in particular stuck with him. He was nine years old, with an alcoholic mother and an absent father. Each day, he would arrive at school with the exact same sandwich: two slices of bread with nothing in between. At home, there was no other food available, and no one to make any. Even so, Garmezy would later recall, the boy wanted to make sure that “no one would feel pity for him and no one would know the ineptitude of his mother.” The boy with the bread sandwich was part of a special group of children. Resilience presents a challenge for psychologists. Environmental threats can come in various guises. Prior to Garmezy’s work on resilience, most research on trauma and negative life events had a reverse focus. In 1989 a developmental psychologist named Emmy Werner published the results of a thirty-two-year longitudinal project.

How To Coach Confidence In People Who Are Feeling Defeated Around half the population of the United States woke up on Wednesday morning to enormous disappointment. In a stunning upset, Donald Trump defeated Hillary Clinton in the race for president, leaving Trump supporters elated and many Clinton backers devastated. But in my work as a coach, I've found that even the most crushing defeats can ultimately be channeled into energy for forging ahead.

How To Boost Emotional Resilience: 10 Research-Backed Secrets Ever dealt with a really difficult situation? We’ve all had our emotional resilience tested. Sometimes it feels like you just want to give up. Which languages rule the internet? Google recognises the most languages, across its Translate and Search services – with 348 languages supported on Google Search. The following infographic from Statista explores how some of the world’s biggest websites deal with the globe’s linguistic diversity. Source: Statista In terms of social media websites, Facebook recognises the most languages – some 120 in 2015. These include Afrikaans, Albanian and Azerbaijani through to Turkish and Vietnamese. Next is Twitter, with 48 languages in 2015, while LinkedIn only supports 24 languages – just 0.3% of the world’s total.

Should Prostitution Be a Crime? The abolitionists moved into the fight against global labor trafficking in the 1990s, focusing on sex trafficking, though most estimates suggest that the majority of trafficking victims are forced into domestic, agricultural or construction work. The abolitionists wanted to erase the traditional legal distinction between forced and consensual prostitution by cracking down on all of it as trafficking. In 1998, they tried to persuade President Bill Clinton — and Hillary Clinton, who was the honorary chairwoman of the Clinton administration’s council on women — to adopt their broad definition in an international crime treaty and a federal trafficking bill. It was a striking effort to expand and stiffen criminal punishment, a strategy Elizabeth Bernstein, a Barnard anthropologist who studies sex work and trafficking, termed “carceral feminism.”

Emotional Agility Reprint: R1311L The prevailing wisdom says that negative thoughts and feelings have no place at the office. But that goes against basic biology. All healthy human beings have an inner stream of thoughts and feelings that... Sixteen thousand—that’s how many words we speak, on average, each day. So imagine how many unspoken ones course through our minds. Psychological resilience Psychological resilience is the ability to mentally or emotionally cope with a crisis or to return to pre-crisis status quickly.[1] Resilience exists when the person uses "mental processes and behaviors in promoting personal assets and protecting self from the potential negative effects of stressors".[2] In simpler terms, psychological resilience exists in people who develop psychological and behavioral capabilities that allow them to remain calm during crises/chaos and to move on from the incident without long-term negative consequences. Background[edit] History[edit] The first research on resilience was published in 1973. The study used epidemiology, which is the study of disease prevalence, to uncover the risks and the protective factors that now help define resilience.[9] A year later, the same group of researchers created tools to look at systems that support development of resilience.[10]

untitled VENEZUELANS are famously inventive with words. After 17 years of chavismo, the left-wing ideology of the late president, Hugo Chávez, they have plenty of material. Insults aimed at his “Bolivarian revolution” abound; the regime, now led by Nicolás Maduro, hurls its own ammunition. With parliamentary elections due on December 6th, The Economist offers a sample. Bachaquero. White Debt The word for debt in German also means guilt. A friend who used to live in Munich mentioned this to me recently. I took note because I’m newly in debt, quite a lot of it, from buying a house. How to Fight Stress with Empathy How many times have you been concerned about a friend or other loved one and asked if everything’s all right only to be told, “Oh, I’m just stressed,” as if there’s nothing to worry about? We often use the words “I’m stressed” casually in our everyday conversations, with little acknowledgment of the adverse effects of stress in our lives. But evidence suggests that we should be much more concerned about our stress levels than we are. The Center for Disease Control found that 66 percent of American workers say they lie awake at night troubled by the physical or emotional effects of stress, and stress has been linked to many health problems, including obesity and heart disease—especially among low-income Americans. Stress not only affects us, but it can impact those around us, too, especially our children. Not all stress is bad, of course.