10 Principles to Live an Antifragile Life. Resilience: How to Rescue Yourself from Adversity – Personal Growth. Why do some people break while others thrive in adversity? 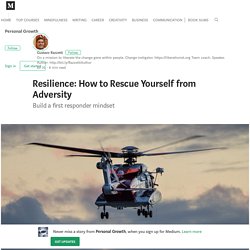 All eyes were on Thailand as millions followed the Cave Rescue mission — it was impossible not to empathize with those twelve boys, their coach and, of course, the brave rescue team. Parents (me included) couldn’t stop but thinking about the families of those kids. We all hoped the rescuers could bring those kids back to their parents. The Will and Ways of Hope. How to Fight Stress with Empathy. How many times have you been concerned about a friend or other loved one and asked if everything’s all right only to be told, “Oh, I’m just stressed,” as if there’s nothing to worry about? 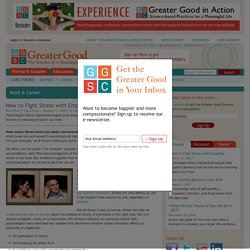 We often use the words “I’m stressed” casually in our everyday conversations, with little acknowledgment of the adverse effects of stress in our lives. But evidence suggests that we should be much more concerned about our stress levels than we are. The Center for Disease Control found that 66 percent of American workers say they lie awake at night troubled by the physical or emotional effects of stress, and stress has been linked to many health problems, including obesity and heart disease—especially among low-income Americans. 5 Tips to Productively Channel Your Anger. How To Coach Confidence In People Who Are Feeling Defeated. Around half the population of the United States woke up on Wednesday morning to enormous disappointment. 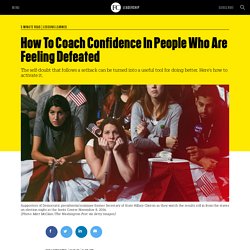 In a stunning upset, Donald Trump defeated Hillary Clinton in the race for president, leaving Trump supporters elated and many Clinton backers devastated. How People Learn to Become Resilient. Norman Garmezy, a developmental psychologist and clinician at the University of Minnesota, met thousands of children in his four decades of research. 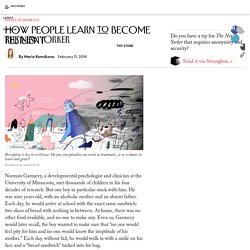 But one boy in particular stuck with him. Emotional Agility. Reprint: R1311L The prevailing wisdom says that negative thoughts and feelings have no place at the office. 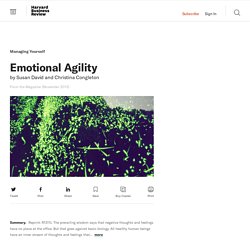 But that goes against basic biology. All healthy human beings have an inner stream of thoughts and feelings that... Resilience Is About How You Recharge, Not How You Endure. After working hard for long hours and toughing it out, we at least expect success. 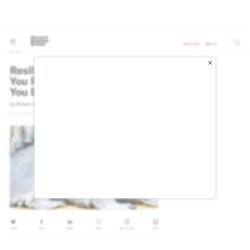 However, more often than not, at the end of the day we are exhausted and still have a long list of tasks to complete. Why does this happen? According to the authors, working adults... This Is How To Boost Emotional Resilience: 10 Research-Backed Secrets. Ever dealt with a really difficult situation? 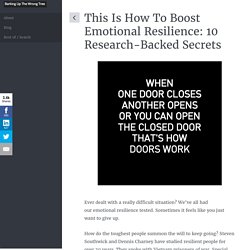 Optimism. Self-compassion. Grit. How to Break Out of a Victim Mentality: 7 Powerful Tips. Image by *Zara (license). 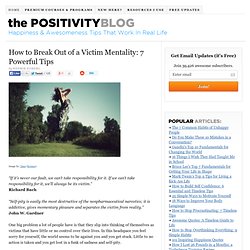 The Art of Resilience. Think you're a prisoner of a troubled childhood? 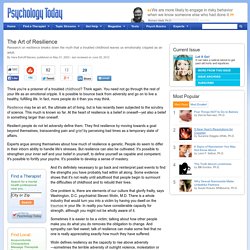 Think again. You need not go through the rest of your life as an emotional cripple. It is possible to bounce back from adversity and go on to live a healthy, fulfilling life. In fact, more people do it than you may think. Resilience may be an art, the ultimate art of living, but is has recently been subjected to the scrutiny of science. The Unexpected Antidote to Procrastination - Peter Bregman. By Peter Bregman | 9:00 AM May 10, 2013 A recent early morning hike in Malibu, California, led me to a beach, where I sat on a rock and watched surfers. 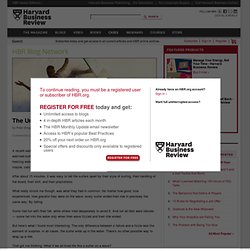 What I Do When it Feels Like My Work Isn't Good Enough. In the beginning, it was easy. There was no pressure. There were no outside eyes. There were no expectations. When I started writing, I wrote in a private document for over a year before I published my first article on JamesClear.com. I wrote about what I wanted to write about. 'F*ck Feelings' Book Argues That Emotions Are Overrated. Put down the talking stick. Stop fruitlessly seeking "closure" with your peevish co-worker. And please, don't bother telling your spouse how annoying you find their tongue-clicking habit—sometimes honesty is less like a breath of fresh air and more like a fart. That’s the argument of Michael Bennett and Sarah Bennett, the father-daughter duo behind the new self-help book F*ck Feelings.

The elder Bennett is a psychiatrist and American Psychiatric Association distinguished fellow. His daughter is a comedy writer. Why Insecurity May Be The Key To Success. Editor's Note: This story contains one of our 11 New Years resolutions you can actually keep in 2014. For the full list, click here. Maybe everything you've been led to believe about being a successful business leader is wrong. What if confidence is overrated? What if faking it until you make it actually does more harm than good? Tomas Chamorro-Premuzic, a professor of business psychology at University College London, thinks so. Novelty-Seeking (Neophilia) Can Be a Predictor of Well-Being. Those are the kinds of questions used to measure novelty-seeking, a personality trait long associated with trouble. As researchers analyzed its genetic roots and relations to the brain’s dopamine system, they linked this trait with problems like attention deficit disorder, compulsive spending and gambling, alcoholism, drug abuse and criminal behavior.

Now, though, after extensively tracking novelty-seekers, researchers are seeing the upside. In the right combination with other traits, it’s a crucial predictor of well-being. “Novelty-seeking is one of the traits that keeps you healthy and happy and fosters personality growth as you age,” says C. Robert Cloninger, the psychiatrist who developed personality tests for measuring this trait.

The Brains of Successful vs. Unsuccessful People Actually Look Very Different. The Key to Success: 3 Emotions Highly Accomplished People Share. What Is Nostalgia Good For? Quite a Bit, Research Shows. How Resilience Works. Overcome Stress and Challenge: 7 Mechanisms of Resilience for High Productivity. The Art of Resilience. How To Be Resilient: 8 Steps To Success When Life Gets Hard. Developing Resilience - Career Development from MindTools.com. An Antifragile Way of Life. Faith In Humanity: 10 Studies To Restore Your Hope For The Future. How (and Why) to Develop Your Mental Toughness. Habits Of People With Mental Toughness. Beautiful Minds, Scientific American Blog Network. The views expressed are those of the author and are not necessarily those of Scientific American.

Fixed vs. Growth: The Two Basic Mindsets That Shape Our Lives. Philosophical Meditation.