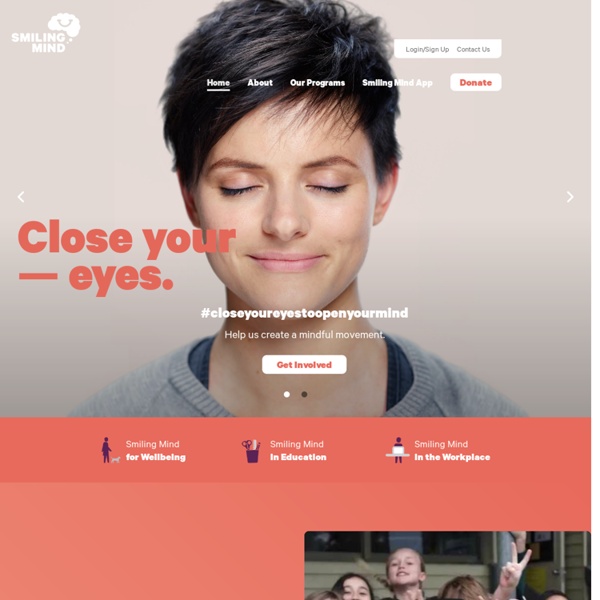 Neural mechanisms of mindfulness and meditation: Evidence from neuroimaging studies School Library in a Box - Book Aid International Schools in both of these areas are located in communities of people earning less than $1 a day, with 90% of the population living as subsistence farmers, with no formal income. These schools have with little or no government funding and they do not have libraries of their own. Most people have no books at home and due to the remote setting of the project schools, many children have never visited a library. The School Library in a Box project aims to take libraries to children who cannot reach one. 700 books in English and Kiswahili are packed into boxes which are then transported to the schools. “The library in a box project has been a saviour as the school did not have books before. An evaluation of this project, sampling eight schools in detail, showed that schools that have received a school library in a box have benefited in multiple ways.

Two simple mindful meditation exercises for teachers | Teacher Network Teaching can be hard, and reports tell us those in the profession feel under increasing pressure. A BBC investigation earlier this year found that stress-levels have soared in recent years due to increased workloads. In my 20-years of practice as a psychologist, I’ve found that mind-body strategies such as mindfulness meditation are one of the best ways to combat stress and anxiety – especially for teachers. Research backs this up. Reduce stress and feelings of burn out.Improve emotional health, including self-confidence, empathy, compassion and patience.Enhance teachers’ ability to concentrate and focus.Improve health, including reductions in absenteeism.Enhance job performance (better classroom management etc). But while mindfulness and meditation are no longer reserved for Buddhist retreats, you might still be unsure about how to integrate this practice into your life. Understanding mindfulness Meditation can be broadly defined as any activity that involves controlling your attention.

School Days: A lifeline for Syrian children For Syrian children who have been uprooted by war, school is essential. Classrooms provide children with a safe space to recover from trauma, develop bonds with other children, exercise their imaginations and build a foundation of learning that will help to heal and strengthen their families and communities into the future. Photos by Peter Biro/IRC Children at the Domiz refugee camp in northern Iraq, home to some 40,000 Syrian Kurds, where the IRC is building a secondary school. Inside Syria, the IRC has established schools in three camps where thousands of families have taken refuge from the fighting. Some 1,500 children are now enrolled. Morning classes follow the Syrian curriculum and include instruction in mathematics, science, Arabic, social studies, English and religion. The IRC provides each student with a school kit including a backpack, pens, colored pencils, notebooks and other items. Three out of four Syrian children have lost a close friend or family member in the war.

In Pictures: 'When we garden, we feel happy' In the midst of an expanse of dry land, thousands of Syrian refugees have been living in Zaatari Camp, Jordan, opened two years ago. Some have turned to gardening to help them adapt to life in the camp and bring a bit of greenery to the desert landscape that has become their home. Mohammad Abu Farah, who works at Save the Children youth centre in Zaatari Camp, is providing gardening and landscaping lessons to children in the camp as a form of informal education and psychosocial support. "When the children arrived at the camp, they had just come from a violent war. Many of them were introverted and struggled in making friends. "Gardening allowed them to make something with their hands, and gave them a sense of accomplishment. Samar, 48, fled to Jordan with her husband and five children after two of her brothers-in-law were killed. Zaatari camp has been home to her family for over two years. They had a large house with a beautiful garden.

Art with Syrian Refugees: The Za’atari Project | Joel Artista As the Syrian War rages on, desperate civilians continue to pour across the borders into neighboring countries. While they have escaped the death and destruction of war, many refugees now find themselves in desolate refugee camps across the region. Other refugees pack into towns and cities, straining services and resources, leading to strained tensions with local populations. Lives are on hold and official work is prohibited. While international humanitarian organizations scramble to provide food, shelter and medical care to refugees, other critical needs often fall through the cracks, such as educational and creative activities for youth to focus on, trauma relief and mentorship programs. To address these issues, I’ve been traveling to Jordan since 2013 to facilitate mural arts projects with Syrian youth and their families. Mohammed Ibrahim working with students in Azraq Camp Me with Jokhadar (left) a local artist in Za’atari Amman, Jordan 2017: Detail of kids’ art Azraq Camp Like this:

How A Happy School Can Help Students Succeed : NPR Ed Every day at Weiner Elementary School starts with a dance party, usually to Best Day Of My Life by American Authors — and that's before the 7:50 a.m. bell even rings. Then comes the morning assembly, where all 121 students and the staff gather for 20 minutes in the cafeteria of the school in Weiner, Ark. They sing songs and learn about an artist, a musician and an international city of the week. They celebrate birthdays. That assembly — and the many other things this school does to create a sense of community and happiness — is part of what experts call school climate. "It's a feeling in a building," Hogue explains. And, like a feeling, school climate is hard to define, difficult to measure and it can swing positive or negative. A study published in the Review of Educational Research today suggests that school climate is something educators and communities should prioritize — especially as a way to bridge the elusive achievement gap.

Inside Syrian Schools: Building bridges for Syrian youth | Brookings Institution This is the fifth in a series of blogs that look at the experiences of Syrian refugee children and their teachers. As we observe World Refugee Day, it’s important to take note that 90 percent of Syrian youth between 15 to 24 years old in Lebanon are out of school. Advocacy messages continue to refer to these young people as a “lost generation,” robbed of their youth by war. However, in our research in Lebanon, we find Syrian youth relentlessly and passionately pursuing educational opportunities. This offers hope for what’s become a desperate situation, and by asking the right questions we can begin to piece together a path forward for these youth. Nevertheless, multiple barriers impede Syrian youth from accessing higher education: There are a limited number of spaces. Despite the challenges, several donors have created opportunities for higher education for Syrian youth in Lebanon. But what subjects should Syrian youth study? Get global education updates from Brookings

Hoist the Sails: The Great Quest for a Play-Based Classroom Fifth-grade students arrive at school to find an unfamiliar sound traveling down the hallway from their classroom. The sound of crashing waves leads them through the door where images of the Santa Maria await them. In two areas of the room, carefully selected materials have been laid out for their exploration. These materials later become a cardboard ship with a pulley system of sails, including simple circuits and LED lights. During the Great Quest project, students set sail for the New World on the Santa Maria each morning in their literacy class. Play can no longer be thought of as merely an unstructured or frivolous activity. Over the last decade, leading my project-based learning school, I've witnessed the power of play first-hand. I recommend the following tips to begin integrating play into your classroom or school. 1. Play should be approached as an element of classroom culture rather than an activity that occurs at a specific period of the day. 2. 3. 4. 5.

Activities – refugeesupport.eu With so many kids on the camp who’ve been out of structured education for so long, quickly organising activities was vital. We now run spontaneous recreational activities for the children, group games, and circus skills. Parents have told us how concerned they are about their children missing out on their education. Structured activities are now the responsibility of the IRC so we coordinate with them to run supplementary activities. Structured education is the responsibility of the Greek Ministry of Education which is struggling to provide places for all the refugee children. As a result, we have built 2 classrooms on-site and will equip them with whatever they need for them to teach the 4-6 year old children in November. We are in the process of providing a high quality playground for the children and currently have 2 swings, 2 see-saws and the start of a trim-trail. access. All this is costly so please consider donating and follow our news for the latest updates.

Syrian Children Draw Their Dreams at School in Refugee Camp Noor, 8, from the city of Homs in Western Syria, holds up a drawing of what she would like the Fayda Camp to be like. Noor and other Syrian refugee children have been living and going to school in the Fayda Camp, some 25 miles east of Beirut, Lebanon. The Beyond Association, a UNICEF partner has been providing schooling, art and music therapy for children in the camp. Maria Assi, chief executive of Beyond Association, told NBC News’ Dr. Nancy Snyderman the children were asked to draw their dreams and express their feelings about the future.

Healing through movement and art – Stories from UNICEF in Iraq – Medium “I feel the earth, I feel the sky, I feel myself.” About 30 children from Besirve Camp for displaced Iraqi citizens, near Zakho in northern Iraq, have gathered in a circle. It’s early morning and rain clouds gather above. Their faces shining and happy, the children recite their mantra, putting their hands down to the earth, lifting them up to the sky and placing their hands on their chests. The children sing a song and then divide into groups for different activities. Some prefer sculpture, sitting in the courtyard of the camp’s UNICEF-supported school, their hands messy with dark red clay. “We do the same things every day,” says Friends of Waldorf Project Manager Jessica Prentice. The programme, supported by a generous donation from the government of Canada, will initially run for ten months. “Being actively and not passively engaged has a healing effect, and so this goes beyond the level of entertaining children,” Ms Prentice says.