The Children’s rights Movement and the Charity sector. – Sean Geoghegan. Sean Geoghegan 26/03/2021 “I am a firm believer in the power of shared experience & storytelling for healing, but you are kidding yourself if you think it is healing when the same organisations that are begging us to tell our stories do nothing 2 help us change the trajectory of our story” (Anonymous CEP Contributor). 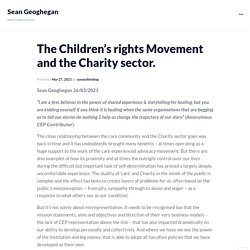 The close relationship between the care community and the Charity sector goes way back in time and it has undoubtedly brought many benefits – at times operating as a huge support to the work of the care experienced advocacy movement. Community Catalysts. "How to talk policy and influence people": a Law and Justice interview with S... Criminologist or Criminal? Liminal spaces and trauma – plasticdollheads. How to promote an anti-racist culture in social work. Children's Bureau Express. Written by Sarah Kastelic, Ph.D., M.S.W. 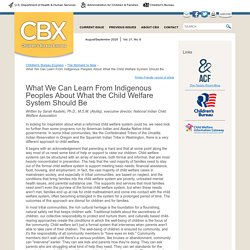 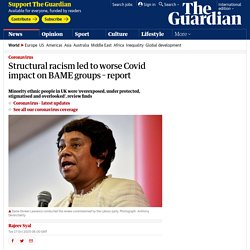 The report, commissioned by Labour, contradicts the government’s adviser on ethnicity, Dr Raghib Ali, who last week dismissed claims that inequalities within government, health, employment and the education system help to explain why Covid-19 killed disproportionately more people from minority ethnic communities. Negative Budgets: A new perspective on poverty and household finances. People often think that problem debt is the result of overspending, such as big credit card bills and bad money management. 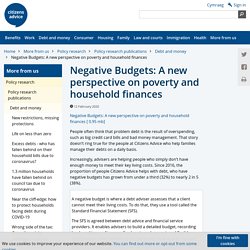 That story doesn’t ring true for the people at Citizens Advice who help families manage their debts on a daily basis. Increasingly, advisers are helping people who simply don’t have enough money to meet their key living costs. Social Workers Taking Action (Podcast) Welcome to Episode 8 of the Fall 2020 #MacroSW podcast. 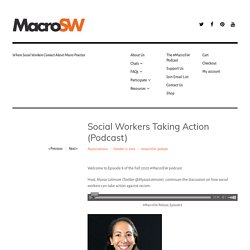 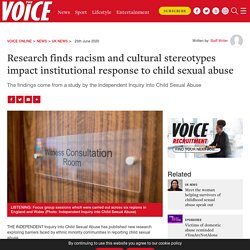 Working in collaboration with the Race Equality Foundation, the report analyses the views and experiences of over 80 individuals across a range of ethnic minority communities, including victims and survivors. It considers three key areas: barriers to disclosure; experiences of institutions; and support for victims and survivors. The report finds that racism, sometimes in the form of cultural stereotypes can lead to failures on the part of institutions in identifying and responding to child sexual abuse. “The social worker was white, okay, and she said to me, ‘This is not sexual abuse. Living Hand to Mouth. Living Hand to Mouth, by Rebecca O’Connell, Abigail Knight and Julia Brannen from the Thomas Coram Research Unit, UCL Institute of Education, reports on the UK findings of the Families and Food in Hard Times study, highlighting the experiences and voices of children and families in low-income households. 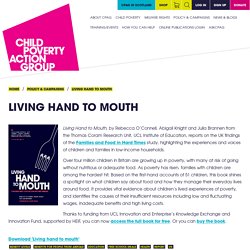 Over four million children in Britain are growing up in poverty, with many at risk of going without nutritious or adequate food. As poverty has risen, families with children are among the hardest hit. Based on the first-hand accounts of 51 children, this book shines a spotlight on what children say about food and how they manage their everyday lives around food. It provides vital evidence about children’s lived experiences of poverty, and identifies the causes of their insufficient resources including low and fluctuating wages, inadequate benefits and high living costs.

‘Dear Reviewer 2………: Who holds the keys to the kingdom of knowledge in social work? This post is inspired by a research paper whose title many within academia may well have voiced themselves, ‘Dear Reviewer 2: Go F’ Yourself‘. 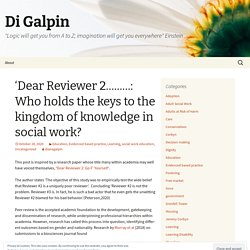 The author states ‘The objective of this study was to empirically test the wide belief that Reviewer #2 is a uniquely poor reviewer’. Concluding ‘Reviewer #2 is not the problem. I had the best body I've ever had – so why did I feel so much shame? In a recently resurfaced 2007 interview from The Ellen Show, Ellen Degeneres is shown upbraiding guest Celine Dion for allowing her then six-year-old son to grow his hair long. 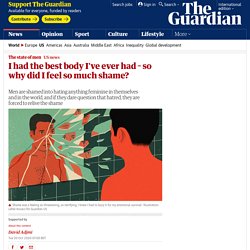 “He is beautiful,” Ellen says, “but look at that hair! When are you gonna cut that hair?” Co-production – putting the people who understand centre stage. This blog is an extract from a longer blog by Professor Peter Beresford and Mark Harrison, who have agreed to an edited version for the Centre for Public Engagement. 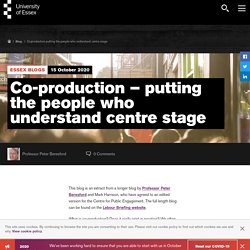 The full length blog can be found on the Labour Briefing website. What is co-production? Does it really exist in practice? We often hear the terms co-design, co-produce, co-construct, but is it really possible to co-produce research and policy that truly engages different types of user? In this blog we highlight what co-production means for improving the quality and efficiency of the social care system. (1) Javon Johnson - "Debt" (Button Live) IGCSE poetry. Beyond the Gender Binary. Modern masculinity. High court condemns lack of provisions in UK for suicidal teenager. COVID-19-is-putting-girls-at-risk. KN-Spotlight-2020-V1. Karma Nirvana – Supporting victims of honour-based abuse and forced marriage. 'So old he was losing his hair': survivors urge MPs to end scandal of UK's child brides. When Payzee Mahmod was married at 16 to a man nearly twice her age she didn’t understand the words spoken during the Islamic ceremony – and nobody thought to translate them for her.

The teenager, who loved fashion and pop music, was preparing to start college. “I had just finished school and the idea of not wearing a uniform was exciting to me,” she remembers. “Instead I found myself trussed up in a wedding dress, with elaborate jewellery, feeling like a sale item at an auction.” Payzee Mahmod: A survivor's plea to end child marriage.

Welcome to Girls Not Brides. End Child Marriage - it’s child abuse. Child marriage is “any formal marriage or informal union between a child under the age of 18 and an adult or another child” (UNICEF). Parliament has recognised, by raising the minimum age for leaving education or training to eighteen, that childhood should be safeguarded as a time for learning and personal development. Safeguarding children from child marriage will enable every child the opportunity to complete their education, make informed choices about their future and reach their full potential. Child marriage causes lifelong harm Types of child marriage. a79829ee-9d85-465c-9a08-270c4fd7e5b5_Parent's guide to black lives matter. BIHR_Mental_Health_Advocacy_and_Human_Rights_Guide. Your Kids Aren't Too Young to Talk About Race: Resource Roundup — Pretty Good.

The Guide to Allyship. How Do You Practice Intersectionalism? An Interview with bell hooks. Meet the psychologist exploring unconscious bias—and its tragic consequences for society. When Jennifer Eberhardt appeared on The Daily Show with Trevor Noah in April 2019, she had a hard time keeping a straight face. Tolerance. Hidden-futures-how-data-denial-threatens-the-fight-against-slavery-after-exploitation-3. ‘I Never Felt like an Illegal Immigrant Until Social Work Turned up at the Hospital’: No Recourse to Public Funds as Necropolitical Exception.

#BAMEOver - The Statement. Episode 19 Live Webinar with Dr Karen Treisman on Culturally Informed and Infused Organisations. Your Kids Aren't Too Young to Talk About Race: Resource Roundup — Pretty Good. Dr. Robin DiAngelo discusses 'White Fragility' In the Pulpit and the Office: The Ubiquity of Racism Denial in Professional Workplace Dialogue. Refugee explains why he risked his life crossing the English Channel. Infantilising Disabled People is a Thing and You’re Probably Unconsciously Doing It. Mia Birdsong: The story we tell about poverty isn't true. Manal al-Sharif: A Saudi woman who dared to drive. Janine Shepherd: A broken body isn't a broken person.

Building better men: how we can begin to redefine masculinity. White people assume niceness is the answer to racial inequality. It's not. I am white. Coronavirus: The refugees teaching languages to lockdown learners around the ... On any given morning in living rooms and kitchens around the world, NaTakallam language tutors settle down in front of their laptops and prepare to teach Arabic, Spanish, French and Farsi to eager, home-bound students. The online language service, taught entirely by refugees, has seen an explosion of interest since global coronavirus lockdowns began.

Not only do they offer a new skill, but learners also have the opportunity to swap lockdown stories with people in far flung places, such as Italy or South America, via videocall. "For the Covid-era we were perfectly placed because we're already in the digital realm,” Aline Sara, co-founder and CEO of NaTakallam, told The National by phone from Paris. TED - The Danger of a Single Story. The Neuroscience of Community - Age of Awareness - Medium. When social workers helped to ban child marriage, suddenly girls had a future... White Debt.

The word for debt in German also means guilt. How People Learn to Become Resilient. Should Prostitution Be a Crime? The abolitionists moved into the fight against global labor trafficking in the 1990s, focusing on sex trafficking, though most estimates suggest that the majority of trafficking victims are forced into domestic, agricultural or construction work. The abolitionists wanted to erase the traditional legal distinction between forced and consensual prostitution by cracking down on all of it as trafficking. In 1998, they tried to persuade President Bill Clinton — and Hillary Clinton, who was the honorary chairwoman of the Clinton administration’s council on women — to adopt their broad definition in an international crime treaty and a federal trafficking bill. Our eureka moment: what I learned from swapping breadwinning roles with my hu... Official Trailer [HD] The Field Guide for Barefoot Psychologists – Beyond Conflict.

Black men get longer prison sentences than white men for the same crime: Study. Britain is one of world’s most age-segregated countries, study finds. Facing Fear - a documentary short film. High court to decide if children can consent to gender reassignment. Home - Voices of Exclusion. I'm Not The Radical Left, I'm The Humane Middle.

‘Happiness Is Incomplete’: A Refugee Couple’s Scattered Lives. Against All Odds. A BEAUTIFUL ANIMATION OF A HARROWING STORY - BBC NEWS. Dadaab: Growing up in the world’s largest refugee camp. Carly, A Refugee's Story. A Life on Hold: The story of a teenage refugee. #ZEEJLFatBL : Eve Was Shamed How Justice Fails Women. John Ralston Saul. John Ralston Saul: The Collapse of Globalism. Haw091467. WhatDoesFairMeanDec2010. Exploring Multiculturalism, anti bias... The Mental Disease of Late-Stage Capitalism. 50 Human Rights Cases That Transformed Britain. Equality. ‘Impostor syndrome’ is a pseudo-medical name for a class problem.

What Is White Privilege, Really? TED - Everything I Believed about Poverty Was Wrong.