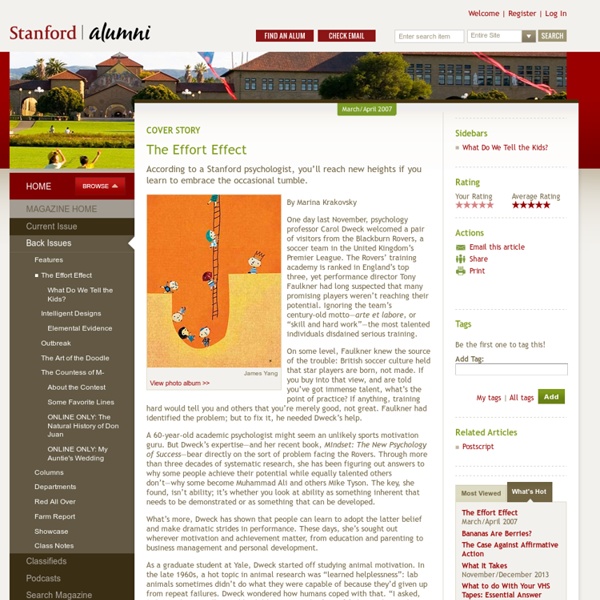 According to a Stanford psychologist, you’ll reach new heights if you learn to embrace the occasional tumble. One day last November, psychology professor Carol Dweck welcomed a pair of visitors from the Blackburn Rovers, a soccer team in the United Kingdom’s Premier League. The Rovers’ training academy is ranked in England’s top three, yet performance director Tony Faulkner had long suspected that many promising players weren’t reaching their potential. Ignoring the team’s century-old motto—arte et labore, or “skill and hard work”—the most talented individuals disdained serious training. On some level, Faulkner knew the source of the trouble: British soccer culture held that star players are born, not made. A 60-year-old academic psychologist might seem an unlikely sports motivation guru. What’s more, Dweck has shown that people can learn to adopt the latter belief and make dramatic strides in performance. As a graduate student at Yale, Dweck started off studying animal motivation.

Smarter not Harder Harry Harlow Harry Frederick Harlow (October 31, 1905 – December 6, 1981) was an American psychologist best known for his maternal-separation, dependency needs, and social isolation experiments on rhesus monkeys, which demonstrated the importance of care-giving and companionship in social and cognitive development. He conducted most of his research at the University of Wisconsin–Madison, where humanistic psychologist Abraham Maslow worked for a time with him. Harlow's experiments were controversial; they included rearing infant macaques in isolation chambers for up to 24 months, from which they emerged severely disturbed.[1] Some researchers cite the experiments as a factor in the rise of the animal liberation movement in the United States.[2] Biography[edit] Born Harry Israel on October 31, 1905 to Mabel Rock and Alonzo Harlow Israel, Harlow grew up in Fairfield, Iowa, the second youngest of four brothers. Harlow's personal life was complicated. Monkey studies[edit] Dr. To investigate the debate, Dr.

From Defeat, Rejection to Success Resistance Training For Your 'Willpower' Muscles hide captionDo not eat this cupcake. iStockphoto.com Look at that cupcake. Doesn't it look delicious? Don't you want to eat it? Well, don't. The power to resist temptation — to pass up dessert, to endure an unpleasant experience, to defer satisfaction — is our "greatest human strength," argue psychologist Roy F. "The Victorians talked about this vague idea of it being some form of mental energy," Tierney tells NPR's Audie Cornish. Whether you're resisting a favorite food or completing a dreaded task, exercising self-control in different areas of your life saps the same mental energy source. "Just putting food where you can see it next to you depletes your willpower," Tierney says. One of the most well-known studies found that hungry students who were forced to resist the temptation of eating chocolate chip cookies did not perform as well on subsequent tests of focus and self-control as students who had not been asked to previously exercise restraint.

Have Scientists Finally Discovered Evidence for Psychic Phenomena? In Lewis Carroll's , the White Queen tells Alice that in her land, " memory works both ways." Not only can the Queen remember things from the past, but she also remembers "things that happened the week after next." Alice attempts to argue with the Queen, stating "I'm sure mine only works one way...I can't remember things before they happen." The Queen replies, "It's a poor sort of memory that only works backwards." How much better would our lives be if we could live in the White Queen's kingdom, where ours memory would work backwards and forewords? Dr. Although prior research has been conducted on the psi phenomena - we have all seen those movie images of people staring at Zener cards with a star or wavy lines on them - such studies often fail to meet the threshold of "scientific investigation." For example, we all know that rehearsing a set of words makes them easier to recall in the future, but what if the rehearsal occurs after the recall?

From Now On: The Newsletter of The Efficacy Institute An idea for the day: Accepting responsibility for the outcomes of the children in one's classroom, whatever their backgrounds and whatever baggage they bring with them, is the absolute requirement for learning how to effectively teach kids living in difficult circumstances. This ethic of responsibility is clear when we talk with our most effective teachers. Where does it come from? And why is it not evident in all? Their initial answers usually cluster around the politically correct 'ours,' and one or two people, often primary grade teachers, will blurt out 'mine.' "What about 'mine'," I say, "Then who's responsible for them?" People acknowledge the implication of this answer: "I accept responsibility for what happens to the children in my class, whether the parents behave responsibly or not, and whether or not my colleagues join me in this responsibility." So the first question is: Whose kids are these?

Behavioral change resource Psychiatric Meds: Prescription for Murder? In a frenzied cry for gun-control, the media is rife with details about the firearms Adam Lanza used to kill 20 children and six adults before turning a handgun on himself at Sandy Hook Elementary School in Newtown, Connecticut, on December 14, 2012. But information about Lanza’s medical history is scarce, feeding speculation that he may fit the profile of school shooters under the influence of psychotherapeutic medication. “In virtually every mass school shooting during the past 15 years, the shooter has been on or in withdrawal from psychiatric drugs,” observed Lawrence Hunter of the Social Security Institute. There is a striking connection between school shootings and psychotherapeutic drugs, also known as psychotropics. • Toby Sincino, a 15-year-old who shot two teachers and himself in 1995 at his South Carolina school, was taking the antidepressant Zoloft. • Shawn Cooper fired two shotgun rounds in 1999 at his Idaho high school while on an antidepressant. • T.J. Dr. The Drug Pushers

With 49 Million Americans on Psychiatric Drugs — Renowned Psychiatrist Issues Call for Psychiatric Drug Withdrawal Note: According Medco Health 1 in 5 American adults are currently taking mind-altering psychiatric drugs such as antidepressants, antipsychotics and anti-anxiety drugs. International drug regulatory agencies have issued warnings that side effects including mania, psychosis, hallucinations, suicidal ideation, diabetes, heart attack, stroke and sudden death as well as severe withdrawal. For more information on documented drug side effects visit CCHR International’s psychiatric drug search engine New York, NY (PRWEB) July 18, 2012 Peter Breggin, a leading crusader against the abusive prescription of psychiatric drugs who has been called “the conscience of psychiatry,” presents a pioneering, person-centered approach to psychiatric drug withdrawal in his new book. With increasing evidence that long-term use of psychiatric drugs damages the brain and complicates withdrawal, and with the number of people on psychiatric medication higher than ever, this work comes out at a critical time.

Thomas Insel: Toward a new understanding of mental illness | Talk Transcript ISEPP Statement on the Connection Between Psychotropic Drugs and Mass Murder - ISEPP Statement on the Connection Between Psychotropic Drugs and Mass Murder The Board of Directors and membership of the International Society For Ethical Psychology and Psychiatry send condolences to the people of Newtown, Connecticut on their horrific losses. Our hearts go out to the parents of the children who were killed and to the families and friends of the adults who were killed. We are calling for an inquiry into the connection between these acts of mass murder and the use of psychotropic drugs. Although the media have cited family members and acquaintances saying Adam Lanza was taking prescription drugs to treat “a neurological-development disorder”, we do not know if he was on psychotropic drugs. But we do know that James Holmes, the Colorado batman shooter, had taken 100 milligrams of Vicodin immediately before he shot up the movie theatre (1). And we do know that: Christopher Pittman was on antidepressants when he killed his grandparents (2). References: (8) Jackson, G.R., (2005).

Behavioral sink The ethologist John B. Calhoun coined the term "behavioral sink" to describe the collapse in behavior which resulted from overcrowding. Over a number of years, Calhoun conducted over-population experiments on rats[1] which culminated in 1962 with the publication of an article in the Scientific American of a study of behavior under conditions of overcrowding.[2] In it, Calhoun coined the term "behavioral sink". Calhoun's work became used as an animal model of societal collapse, and his study has become a touchstone of urban sociology and psychology in general.[3] In it, Calhoun described the behavior as follows: Calhoun would continue his experiments for many years, but the publication of the 1962 article put the concept in the public domain, where it took root in popular culture as an analogy for human behavior. Calhoun retired from NIMH in 1984, but continued to work on his research results until his death on September 7, 1995.[5] The experiments[edit] Influence of the concept[edit]

Slavoj Zizek-Bibliography/The Big Other Doesn't Exist/Lacan Dot Com Why did Freud supplement the Oedipal myth with the mythical narrative of the "primordial father" in Totem and Taboo (T&T)? The lesson of this second myth is the exact obverse of the Oedipus: far from having to deal with the father who, intervening as the Third, prevents direct contact with the incestuous object (thus sustaining the illusion that his annihilation would give us free access to this object), it is the killing of the father, i.e., the very realization of the Oedipal wish, which gives rise to symbolic prohibition (the dead father returns as his Name). And today's much-decried "decline of Oedipus" (of the paternal symbolic authority) is precisely the return of figures which function according to the logic of the "primordial father" from "totalitarian" political leaders to the paternal sexual harasser. But why? However, there is still something missing in the T&T matrix. These deadlocks indicate that today, in a sense, "the big Other no longer exists" however, in WHAT sense?