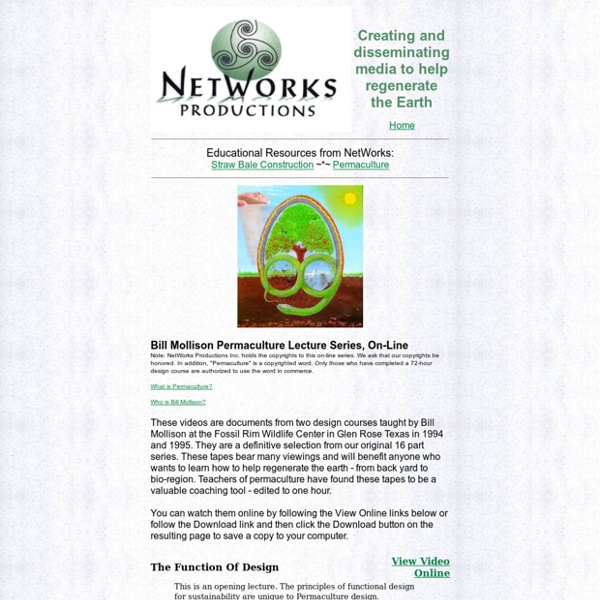 Straw Bale Construction Straw bale construction is gaining worldwide recognition as a viable, high-performance, earth- and people-friendly building technique which utilizes a natural by-product of food production. The Straw Bale Solution is 30-minute video introduction to straw bale building. It offers viewers an excellent look at $1.50 a square foot straw-bale homes in Mexico and the custom high-end straw-bale mansions of Santa Fe... The Straw Bale Solution (#C 01) Building with bales can produce ecological, empowering and affordable housing, and NetWorks' award-winning video provides an entertaining overview of how and why. The Last Straw The Last Straw, the quarterly journal of straw-bale and natural building, began in 1992 with Judy Knox and Matts Myhrman of Out On Bale (un)Ltd at the publishing helm. In 2003, TLS was transfered to, and is now published by the Green Prairie Foundation for Sustainability in Lincoln, Nebraska. Networks still sells back issues (#1-39) of TLS Related:  Permaculture • Permaculture

What Permaculture Isn’t—and Is Permaculture is notoriously hard to define. A recent survey shows that people simultaneously believe it is a design approach, a philosophy, a movement, and a set of practices. This broad and contradiction-laden brush doesn’t just make permaculture hard to describe. It can be off-putting, too. Humans are a problem-solving species. Thomas Kuhn, in his masterwork, The Structure of Scientific Revolutions, uses the word “paradigm” to mean the viewpoint that defines the problems to be solved in a particular field. “Paradigm” has been trivialized through overuse and I’m sure that Kuhn is spinning in his grave. Permaculture and other ecological approaches are attempts to articulate this new paradigm, by framing the problem and offering tools and strategies to pursue its solution. So, why, then, is permaculture so confusing to define? In the 18th Century, combustion was explained by something called phlogiston. In the 1770s, cracks began to appear in phlogiston theory.

Which Commercial Fertilizer is Best? - Leaf, Root & Fruit Gardening Services Melbourne We purchased a range of “off-the-shelf” fertilizers from Bunnings and tested their performance. We think our Hungry Bin Worm Farm is great. It’s easy to use, the worms love it, and it produces plenty of worm wee. This summer we conducted an experiment to test the performance of a range of potting mixes. We compared nine different fertilizing regimes. Each treatment was used to try and improve the plants growing in two different types of potting mix. We mixed the powdered and pelletised fertilizers through the potting mix prior to potting up. For both the potting mix and fertilizer experiments, we used capsicum seedlings. The potted-up seedlings were then placed in our greenhouse. We assessed each of the plants and recorded the colour of the leaves as well as the number of plants in each group that had set fruit. Results of different fertilizers used to treat seedlings growing in the Fulton’s Bulk Potting Mix We also took photos of the plants. The best plant from each of the 5 replicates.

Bill Mollison Bruce Charles 'Bill' Mollison (born 1928 in Stanley, Tasmania, Australia) is a researcher, author, scientist, teacher and Biologist. He is considered to be the 'father of permaculture',[1] however Joseph Russell Smith, was the first to write about a system of Permanent Agriculture in a book entitled Tree Crops, published in 1929.[2] Permaculture is an integrated system of design, Mollison co-developed with David Holmgren, that encompasses not only agriculture, horticulture, architecture and ecology, but also economic systems, land access strategies and legal systems for businesses and communities. In 1978, Mollison collaborated with David Holmgren, and they wrote a book called Permaculture One. Bill Mollison founded The Permaculture Institute in Tasmania, and created a training system to train others under the umbrella of Permaculture. He received the Right Livelihood Award in 1981 with Patrick van Rensburg. Bibliography[edit] Articles Mollison, Bill (15–21 September 1978). See also[edit]

Introduction to Agroecology: Green Gold- "The Source of Wealth is [are] the Functional Ecosystems" "Kariegasfontein Ranch, Aberdeen, South Africa: Land on the left managed under Holistic Planned Grazing (HPG) in 200 mm [7.87 inches] rainfall, showing a contrast with advancing desertification," Photo Credit: Norman Kroon. Source. I fixed the horizon line from original image. My last diary in this series shared Allan Savory's TED talk on his system of Holistic Management. Recognizing the audacity of such a statement, I provided the following for context: Allan Savory is NOT proclaiming that Holistic Management is the only solution for climate change. In light of the acknowledgement that Holistic Management (HM in this diary) is not appropriate everywhere all the time, nor is it the only solution for climate change, I wish to present John D. Originally aired on Dutch TV by VPRO, Green Gold was made in conjunction with Liu's Environmental Education Media Project (EEMP).2 Green Gold is an extended version of "Hope in a Changing Climate," coproduced by EEMP and The Open University.3 2." 5.

David Holmgren David Holmgren (born 1955) is an Australian environmental designer, ecological educator and writer. He is best known as one of the co-originators of the permaculture concept with Bill Mollison. Life and work[edit] Holmgren was born in the state of Western Australia to political parents who were very active in the movement against Australia's involvement in the Vietnam war. I wrote the manuscript, which was based partly on our constant discussions and on our practical working together in the garden and on our visits to other sites in Tasmania... The book was a mixture of insights relating to agriculture, landscape architecture and ecology. According to Holmgren, '(t)he word permaculture was coined by Bill Mollison and myself in the mid-1970s to describe an "integrated, evolving system of perennial or self-perpetuating plant and animal species useful to man". Permaculture: Principles and Pathways beyond Sustainability[edit] Weeds or Wild Nature[edit] Eco village design[edit] Translation[edit]

Exploring a beautiful, 23-year-old food forest in New Zealand (Video) I've asked this before—but having toured many permaculture gardens and food forests in my time, I've often had one big question: Can you really establish a satisfying, nutritious diet from the hodge-podge mixture of herbs, fruits, nuts and perennial vegetables that seem to make up the mainstay of such plantings? So this latest offering from the ever fabulous Happen Films is particularly welcome. Exploring the beautiful-looking, 23-year-old, 2-acre food forest created by Robert and Robyn Guyton on the South Island of New Zealand, the video is worth watching just for the sheer beauty of what a mature food forest can look like. Robert also touches on the very topic that has always had me skeptical: to eat primarily from a forest garden, you have to learn to adapt to what nature offers you. I confess I still have a hard time imagining myself living primarily off the bounty of a food forest.