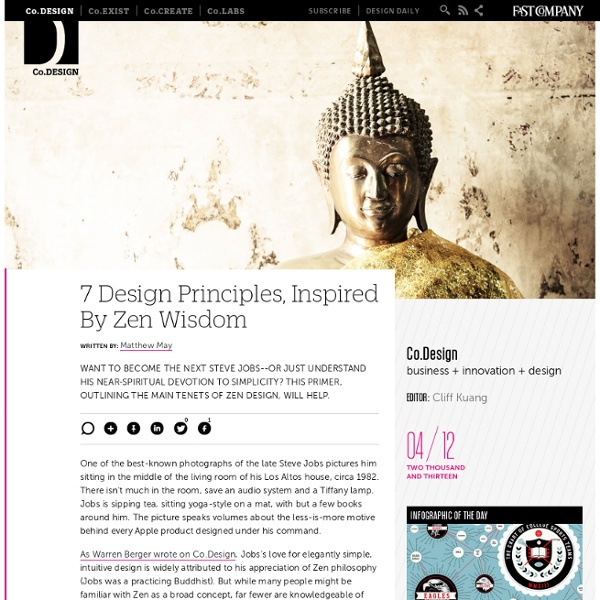 One of the best-known photographs of the late Steve Jobs pictures him sitting in the middle of the living room of his Los Altos house, circa 1982. There isn’t much in the room, save an audio system and a Tiffany lamp. Jobs is sipping tea, sitting yoga-style on a mat, with but a few books around him. The picture speaks volumes about the less-is-more motive behind every Apple product designed under his command. As Warren Berger wrote on Co.Design, Jobs’s love for elegantly simple, intuitive design is widely attributed to his appreciation of Zen philosophy (Jobs was a practicing Buddhist). But while many people might be familiar with Zen as a broad concept, far fewer are knowledgeable of the key aesthetic principles that collectively comprise the “Zen of design.” To understand the Zen principles, a good starting point is shibumi. James Michener referred to shibumi in his 1968 novel Iberia, writing that it can’t be translated and has no explanation. The Shibumi Seven 1. 2. 3. 4. 5. 6. 7.

Touch The Future: Create An Elegant Website With HTML 5 And CSS3 I’m sure that who chooses to work as web designer makes a choice of heart, a choice of love. He/she decides to bet any given day on his creativity and his ability of producing an idea and of making it tangible, visible and perceptible for all. These crazy men have my respect. But, also when the creative side is very important for a work, there exists a logical (and technical) part in all creative process. There are some moments and situations in which the creative mind needs an analytical method to achieve the objective, that is, for us, the creation of a well-done website. In his article on Design Informer titled “Web Design Iterations And Algorithm,” Adit Gupta explains how we can approach a web design work and how a website project can be processed in a number of iterations following a main algorithm. Five macro-steps to build an effective website using brain, pencil, paper, Photoshop, HTML and CSS. How HTML 5 And CSS3 Can Change Web Design Quick Overview On HTML 5 Sketch Your Ideas <!