Detroit by Air. You can learn a lot about a place by seeing it from the air. 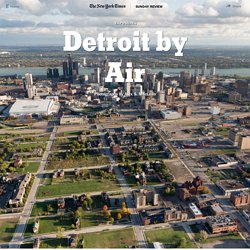 I’m a pilot and an aerial photographer; I am also trained as an architect. I’ve always been interested in how the natural and constructed worlds work together, and sometimes collide. Issues like income inequality also reveal themselves quickly from above, and in Detroit and the surrounding area, the stark contrast between the haves and the have-nots couldn’t be more apparent. Outside the city center, I flew over new homes built alongside lakes and country clubs. Five-car garages, swimming pools and pool houses decorated elaborately landscaped yards. I first photographed Detroit from the air during the Reagan-Carter campaign 34 years ago.

From the air today, the decline appears to be slowing. I think that the inner ring of Detroit will win out in the long run, as cities are and will continue to be the greenest places to live on a per-capita basis. Rust Wire » Blog Archive » Ten Lessons from European Industrial Cities. Home » Architecture, Art, Economic Development, Editorial, Featured, Good Ideas, Politics, Public Transportation, Urban Planning 8 October 2013No Comment. 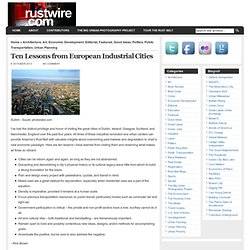 Urban Environment. The University of Chicago Urban Network. Cities’ Elusive Quest for a Post-Industrial Future. What do rusting industrial cities have in common with outmoded BlackBerries? In this era of constant technological progress, talent mobility and global competition, it's striking how many similarities can be drawn between cities and companies, and the need for both to continuously adjust their industrial strategies to avoid oblivion or bankruptcy.

Cities can lose their vigor and vitality just as surely as a once-hot product can lose its cutting-edge cool. RIM, the maker of the the once-ubiquitous BackBerry, has been leapfrogged by companies with more nimble technologies; Kodak, once synonymous with photography, went bankrupt when it failed to make the transition from film to digital. Stedelijke Netwerken. Resilient Cities - ICLEI: Glossary of key terms. This is an edited version of a glossary that appears in the first volume of ICLEI’s Local Sustainability book series, published by Springer: Resilient Cities: Cities and Adaptation to Climate Change -- Proceedings of the Global Forum 2010. 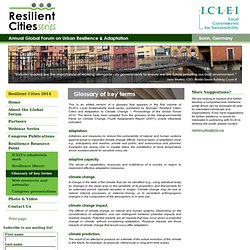 The terms have been adapted from the glossary of the Intergovernmental Panel on Climate Change, Fourth Assessment Report (2007),i unless otherwise indicated. adaptation. Initiatives and measures to reduce the vulnerability of natural and human systems against actual or expected climate change effects. Understanding Resilience. 2013 Global Hunger Index A resilience framework can help bolster support for interventions, such as safety-net programs, that bridge relief and development. 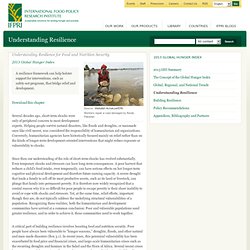 Download this chapter Several decades ago, short-term shocks were only of peripheral concern to most development experts. Helping people survive natural disasters, like floods and droughts, or manmade ones like civil unrest, was considered the responsibility of humanitarian aid organizations. Resiliency vs. sustainability: Can the megacities of the future be both? Photo by Spencer Platt/Getty Images. 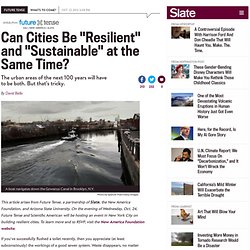 This article arises from Future Tense, a partnership of Slate, the New America Foundation, and Arizona State University. On the evening of Wednesday, Oct. 24, Future Tense and Scientific American will be hosting an event in New York City on building resilient cities. To learn more and to RSVP, visit the New America Foundation website. If you've successfully flushed a toilet recently, then you appreciate (at least subconsciously) the workings of a good sewer system. Waste disappears, no matter what time of day or night, or what the weather's like. But weather is actually a challenge for a sewer system, especially precipitation. How does New York do it? That's great for keeping sewage from finding other places to go—like back up into your toilet. 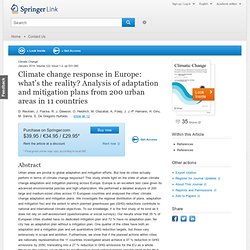 But how do cities actually perform in terms of climate change response? This study sheds light on the state of urban climate change adaptation and mitigation planning across Europe. Europe is an excellent test case given its advanced environmental policies and high urbanization. We performed a detailed analysis of 200 large and medium-sized cities across 11 European countries and analysed the cities’ climate change adaptation and mitigation plans. We investigate the regional distribution of plans, adaptation and mitigation foci and the extent to which planned greenhouse gas (GHG) reductions contribute to national and international climate objectives. Making cities strong by investing in resilience - Toolkit for resilient cities. PROFILE. ResilientCity Home. Welcome to Making Cities Resilient website. Seven Principles for Big Data and Resilience Projects. The following is a draft “Code of Conduct” that seeks to provide guidance on best practices for resilience building projects that leverage Big Data and Advanced Computing. 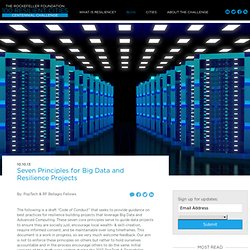 These seven core principles serve to guide data projects to ensure they are socially just, encourage local wealth- & skill-creation, require informed consent, and be maintainable over long timeframes. This document is a work in progress, so we very much welcome feedback. Our aim is not to enforce these principles on others but rather to hold ourselves accountable and in the process encourage others to do the same. E4 The City Resilient. Community is the nucleus of urban resilience in a world that grows more turbulent with each passing year. 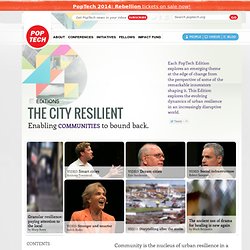 An analysis of almost any crisis strongly supports this notion: In a crunch, people naturally turn toward trusted individuals and institutions. Local knowledge and leadership gain instant currency. Neighbors instinctively help neighbors. This provides a solid conceptual anchor for efforts to improve urban resilience, but raises countless related issues. What is a community? This PopTech Edition grew out of an urban resilience summit by PopTech and the Rockefeller Foundation at the Brooklyn Academy of Music in June 2013. Reaching Resilience. TURAS - Urban Resilience and Sustainability. Resilience Alliance - Urban resilience. The Urban Resilience program will focus research on the major challenges facing urban systems and the landscapes they comprise. 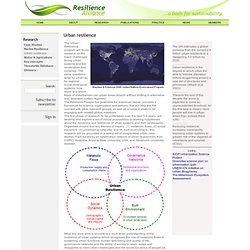 The same questions arise for urban as for regional social-ecological systems: how much and which kinds of disturbances can urban areas absorb without shifting to alternative less desirable system regimes? The Research Prospectus (available for download below) provides a framework for science organization and delivery that will help the RA connect with other research groups, as well as provide a platform for engaging with related global initiatives. The first phase of research, to be undertaken over the next 3-5 years, will develop and explore a set of robust propositions or working hypotheses about the dynamics and resilience of urban systems and their landscapes. 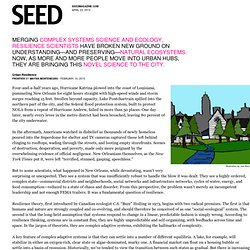 Swollen beyond capacity, Lake Pontchartrain spilled into the northern part of the city, and the federal flood protection system, built to protect NOLA from a repeat of Hurricane Andrew, failed in more than 50 places. One day later, nearly every levee in the metro district had been breached, leaving 80 percent of the city underwater.